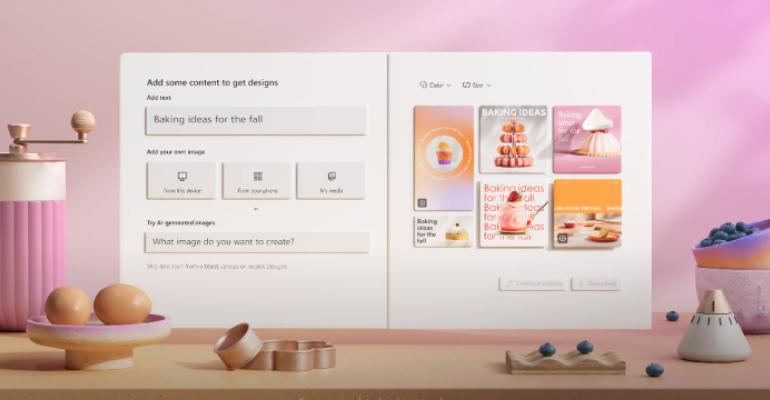 Microsoft is the latest big name to embrace generative AI – as the company launched Designer, a tool that allows users to generate images from text.

Related: Microsoft Ignite 2022 Shows Users How To Do More With Less

From social posts to postcards, users can use the tool to generate AI-made custom images for their design needs.

The AI generator is an integration of OpenAI’s DALL-E, the popular generative AI tool. Microsoft enjoys a long history with OpenAI, having invested $1 billion in the company back in 2019 and holding an exclusive license to GPT-3.

In Designer, users can type in what they want their image to contain. One could also upload images so the system will have references of what it’s supposed to be generating.

The platform can then use the images to create designs using a suite of tools, including the ability to add text and visuals or change colors.

The generated designs can then be exported as various file types or shared via social media.

Designer is not yet fully available – with Microsoft limiting access to a free-to-access web app. The company plans to use this initial launch as a way to garner feedback before offering it as part of its 365 product line.

The platform bears a striking resemblance to the popular app Canva, which recently was valued at $26 billion.

Microsoft joined the likes of Facebook parent Meta, Google and OpenAI,  which have all worked on generative AI projects of late.

But while popular, several online platforms, including Getty Images, have banned uploads of AI art.  The latest group to do so is the Reddit community dedicated to Frank Herbert’s Dune.

The r/Dune subreddit has changed its user rules to bar users from posting AI-generated images to the community’s board.