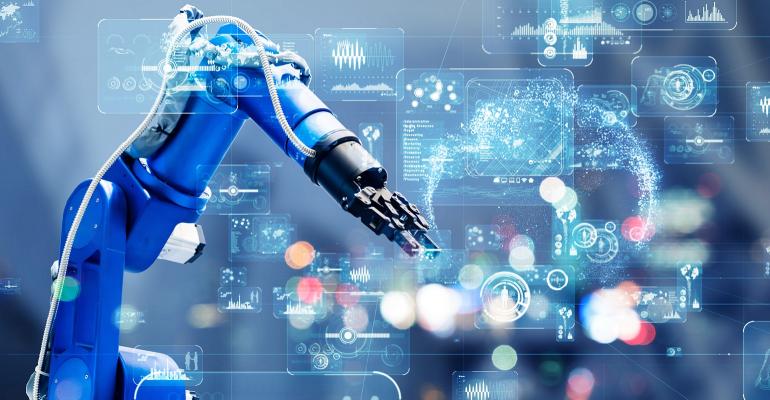 RPA is so 2020. The next frontier for AI (and blockchain and IoT) in the enterprise adds digital smarts to automation.

Last year was a big one for robotic process automation, as the COVID-19 pandemic pushed RPA’s adoption forward out of necessity. Now that the business environment is beginning to return to normal and more employees are going back to their regular work environments, a more considered approach to automation is the buzzed-about advancement for this year and beyond.

Intelligent automation refers to the integration of RPA with components of several different emerging technologies – in particular, machine learning and artificial intelligence but also blockchain and the internet of things. As automation is increasingly integrated into a variety of business environments, an intelligent approach to that automation – one that harnesses the power of AI and analytics – becomes the next natural step.

The signs of intelligent automation’s rising cachet are varied, and while the term may seem new, the seeds for its pandemic-aided boom were planted years ago. Since 2011, venture capital investment in robotics and AI ventures has grown more than 70% each year. In 2013 – the same year Google bought eight robotics startups in six months – an exchange-traded fund tracking the global robotics and automation sector was listed on NASDAQ. And in the years since, IBM has spent heavily on Watson, Facebook has made its own AI and speech recognition investments, and several major car manufacturers have begun work on autonomous vehicles.

What Is Intelligent Automation?

According to IBM, there are three components of intelligent automation: artificial intelligence, business process management and robotic process automation. When integrated in an enterprise environment, they can simplify decision-making processes, improve the management and analysis of large stores of data, reduce human errors, and lower expenses by increasing efficiency and timeliness.

The ways that intelligent automation can fit into any given enterprise are as varied as those enterprises themselves and the technologies involved. For example, blockchain’s distributed databases can be of use to the shipping industry because it allows for storage and access that’s spread around the world but secure. RPA bots can automate the management of the digital identities and access permissions of thousands of employees in a large global firm. And AI tools improve cybersecurity monitoring and learn from previous breaches or near misses – something of increasing importance as companies around the world deal with data breaches and cyberattacks.

All of this represents potential for digital transformation across a variety of industries. But as the bar for that transformation keeps changing, enterprises may struggle to keep up. For example, can your firm pivot to intelligent automation if it’s still working on scaling and integrating RPA? Or, in the case of smaller operations, intelligent automation just may not be a reasonable business goal no matter how much buzz there is around it.

It’s likely to change as the technology both improves and becomes more affordable at a smaller scale, but right now intelligent automation just doesn’t make sense for many small and medium-size enterprises (SMEs). On the other hand, intelligent automation could be an opportunity for businesses that can’t justify jumping in on RPA, says Rick Hoskins, founder of Filter King, a subscription service for air filter products.

“Most SMEs don’t have the volume to justify RPA. They can’t automate everything because there are too many minor variations for the software to handle,” Hoskins said. But intelligent automation could work with larger datasets – for example, customer data – to provide insights into creative areas such as marketing. That’s where smaller enterprises can benefit, he said. They can handle tasks such as scheduling or payroll, but can’t possibly analyze the data for something like sales figures in a timely or efficient way.

Scaling intelligent automation effectively also requires good data behind the involved machine learning models and advanced algorithms. “The sand in the gears of adoption of these systems is the dependence of the learning models on accurate and efficient collection of human insights,” said Scott Brickler, CEO of CADTALK, an engineering and manufacturing software solution.

Good or bad data can hamper intelligent automation adoption in several ways. For example, scheduling algorithms for manufacturers rely on accuracy from their engineers to plan effectively for individual component production. Any delays on those components can push back delivery of the complex goods they make up. In turn, those delays could lead to further ones in shipping and ordering – delays that will be hard to plan for if the data used in their own automated software is insufficient or otherwise unsuitable.

“The quality of those human predictions at the beginning of this series of interactions will drive the overall value for the downstream consumers of those predictions,” Brickler said. “Even small variations on the early predictions can lead to very large changes in downstream predictions.”

In short, though intelligent automation has the potential to be transformational across a variety of industries, these technologies are still developing – and they are only as good as both the data they are developed with and the humans developing them.

“Just like a golf ball being struck just a few millimeters from the sweet spot on a driver can mean the difference in missing the fairway completely,” Brickler said, “the consistency and accuracy of the data in the early parts of the business process will be the target for intelligent automation.”

In speaking of the importance of humans, intelligent automation brings up some of the same concerns as other forms of automation regarding the future role of workers in a variety of large industries.

To be clear, this isn’t AI and robotics Jetsons-style – the tools of RPA are more likely to involve software than hardware. Think software scheduling assistants, not chrome-plated housekeepers. (However, it does sometimes mean hardware too – an estimated $300 billion will be spent on smart manufacturing technologies by 2023, Ernst & Young says.)

According to Ernst & Young Global Limited, 800 million workers around the world – more than 20% of the current global labor force – might lose their jobs to machines by 2030. Every industry could potentially be affected, but EY data shows that finance, administration, customer service, facilities management and sales have the highest potential to be transformed by automation.

That represents not just a crisis for those individual workers but also a challenge to organizations to integrate the automation increasingly required due to the data explosion into a workplace that will still need humans to operate the technologies. They will also need to maintain and foster environments that promote goodwill among their employees and clients and foster innovation by providing work environments that retain valuable employees and offer training and retraining opportunities, even as automation becomes increasingly advanced.

After all, the last industrial revolution still required humans, Brickler pointed out. “That revolution started when people stopped making things one-off and started to create machines that could make things consistently and accurately with less-skilled labor,” he said. Those machines were used to make more complex machines, which were then used to make even more complex machines, and so on – until the machines were making things better than the humans could manually.

But all along the way, we’ve still needed people to develop and build those machines, and run them, and write the software that ensures they run properly – and the same will be true going forward, even as enterprise digital transformation continues. “The next revolution will follow a similar path,” Brickler said.