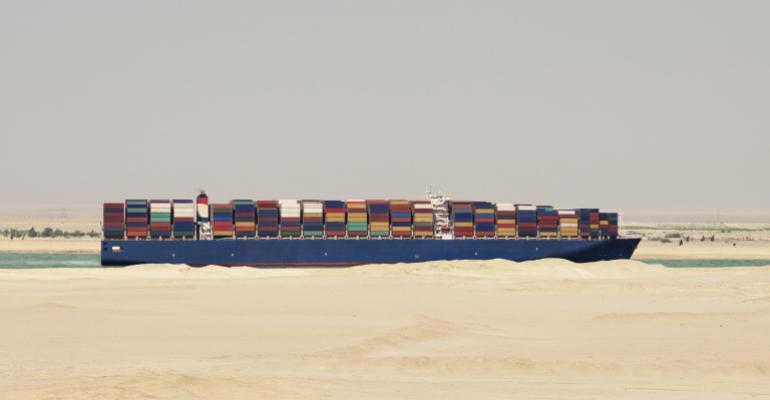 Machine learning automation is increasingly part of the shipping industry, but it can’t prevent every problem, as evidenced by the Ever Given running aground in the Suez Canal.

In late March, the world became distracted from everything else going on — no small feat, considering — when a large boat became stuck in the Suez Canal.

The boat — the Ever Given, a 400-meter-long container ship — ran aground on March 23 in the canal. As a result, more than 400 ships were blocked from passing through the Suez Canal for six days; other ships rerouted to take an expensive 5,000-kilometer detour around the Cape of Good Hope. Clearing the backlog took nearly another week once the Ever Given was freed on March 29, and the estimated daily cost of the shipping traffic disruption is $10 billion.

The saga of the Ever Given provided the world with a rare moment of unity around a major news story: Everyone could agree the boat was very big, and very stuck. It also highlighted the importance of the global shipping industry, still the cheapest way to move goods around our increasingly globalized world — and the precarity of the systems that keep that industry running smoothly.

Increasingly, those systems involve machine learning automation, which is used in the industry for everything from scheduling at ports to optimization of shipping patterns for a wide variety of goods. For example, a Navis survey done in 2019 found that more than eight in 10 respondents expected to increase investment in artificial intelligence over the next three years, and majorities agreed that AI could be used in various automating processes at terminals.

But when the Suez Canal became blocked by a boat that was difficult to move, the result was a spotlight on the pitfalls of a reliance on machine learning to keep a global industry steaming along.

A situation such as the one in the Suez Canal is anathema to machine learning, said Xavier Amella, chief technology officer for WIN Business Services, a division of Odyssey Logistics and Technology.

“ML isn’t some magic,” Amella said. “It is literally what it says on the box — it is a machine learning.”

Computers must be trained with data from predictable and known outcomes in order to predict the potential future outcomes from new data; additionally, appropriate data points have to be mapped to their relevance, and the training data must address everything relevant.

But there are situations when the outcomes are unpredictable or unknown; the result is that there is a lack of data that can be used to train the systems making predictions or suggestions for a company or industry. The shipping industry has been learning this lesson since the beginning of the ongoing COVID-19 pandemic, Amella said.

“What COVID has done is basically threw a wrench into the models that were trained on data prior to 2020,” he said, “because it’s either going to be anomalous data that should be excluded because freight is going to go back to pre-COVID normal, or it could be the new future in which case all the previous learning has to be retaught.”

The same will be true of data generated during the shutdown in the canal, and the short-term period afterward as the global shipping industry gets back on track. Data from outcomes like a ship’s unexpected delay due to the blockage, or its rerouting to avoid that delay, could influence ML models if included — even though that data represents situations that were not predictable outcomes but rather aberrations in the usual operations of the shipping industry.

One important lesson of the situation in the Suez Canal is that not everything can be predicted, said Philippe Barbe — and that the most unpredicted events are also the most painful. The stuck boat highlights the importance of scenario planning, even when automation is in place, said Barbe, who holds a PhD in mathematics and works as a consultant in data science, AI and analytics.

There have been studies on what would happen if major shipping lanes like the Suez or Panama canals were to close, he said; those mostly focused on the potential of closures due to conflict or terrorism.

“The ship stuck by accident was not such a scenario,” Barbe said. “Nevertheless, it is a similar situation.” Good scenario planning about a potential shutdown of the Suez or another major shipping canal or port can help deal with such a scenario going forward, he said, but still can’t accurately predict when such a situation might occur.

And in addition to highlighting potential issues with machine learning in future automation and prediction, if data from the blockage is included in models going forward, ML can’t be effectively used to untangle the blockages and delays because there is no relevant prior data on which to base modeling.

“In regard to Suez, ML can’t really help because to do that, we would have to deliberately disrupt the global supply chain and then ‘fix it’ multiple times and then use that data to train the computers to predict the best way to fix it in the future,” Amella said. “Obviously, that’s not going to happen.”

Getting Back on Track

Machine learning automation couldn’t prevent a boat from getting stuck in the Suez Canal — but it could help the global shipping industry get back on track now that the immediate problem is resolved, Barbe said.

One potential scenario is that if all parties cooperate and have a clear understanding of the cost and consequences of supply chain cascade to everyone, machine learning can be used to prioritize passage of the backlog, he said.

Alternatively, if that cooperation isn’t present, then each company can figure out their individual consequences and costs and then use ML optimization to mitigate them. Now that the canal is open once again and the current backlog has been cleared — though its boats are still behind schedule and adjustments down the line will be needed — machine learning may have a role to play in handling such a situation more efficiently the next time.