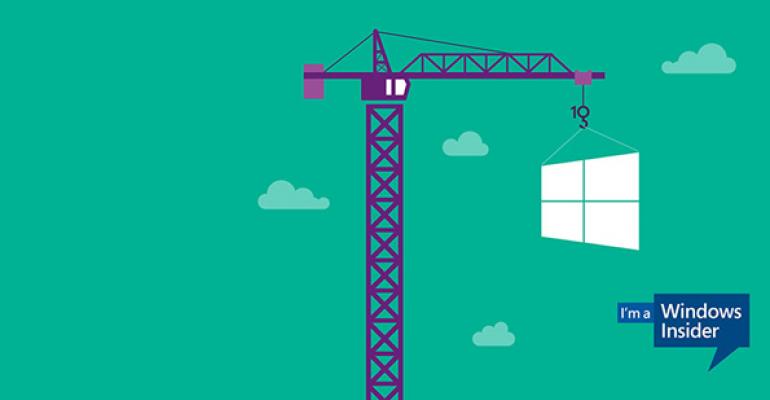 But no one should actually do this

Oddly enough, this is a question I'm asked very regularly: If one were to participate in the Windows Technical Preview, would they be able to upgrade to the final, RTM version of Windows 10 when that becomes available? This week, Microsoft actually answered that question with a qualified yes, which is somewhat surprising in its own right. But my advice is to not worry about such things: When the RTM version of Windows 10 comes out, you'll want to do a clean install anyway.

The background: On December 5, someone asked Microsoft's Gabe Aul—he's emerged as the face of the Windows Technical Preview—whether testers would be "able to update to the RTM version [of Windows 10] when it ships? Mr. Aul responded in the affirmative: "Yes, that is our intent."

This is interesting on a few levels, the most obvious being that Microsoft has never officially supported upgrading from pre-release versions of Windows to shipping versions. But if you've been upgrading from build to build in the Windows Technical Preview, it's fair to say that the RTM version is just another build. So, yeah, you should be able to upgrade.

Aul's use of the word intent is likewise of note because, well, you never know what might go wrong. He can't just say yes.

My contention, however, is that none of this matters. And that to get an accurate view of Windows 10, you will need to do a clean install of the OS, or upgrade from a supported previous version such as Windows 7 or Windows 8.x. Upgrading from a prerelease Windows 10 version isn't just bad from a feedback perspective—I mean, seriously, who cares?—but it can create weird problems in its own right. Problems that Microsoft shouldn't be expected to fix.

The reason I think this question is odd is because it's so common. You'd think that people running pre-release Windows 10 versions would be technical enough to handle disasters and be able to reinstall Windows and their apps—and resuscitate their data—should anything go truly south. My recent issues with build 9879 are a great example. It was a pain in the butt, but I didn't lose anything. I set up things so that's never a worry, and I use pre-release software on my daily-use PCs with abandon.

One thing I've learned over the 21 years of writing professionally about technology is that you should always be ready to recover your PC, and these days that's easier and quicker than ever thanks to advances in Windows (OneDrive integration for documents and data, settings sync and so on) and the steady move away from heavy, desktop-based application installs. When Windows 10 RTMs, I'll be nuking every one of my PCs from space—i.e. doing clean installs of Windows 10—and so should you.

I'm not going to belittle anyone that does want to upgrade from the preview to the RTM version of Windows 10. Honestly, Microsoft needs average users testing this product more than it needs technical users. But for the crowd reading this site, come on. You're better than that.