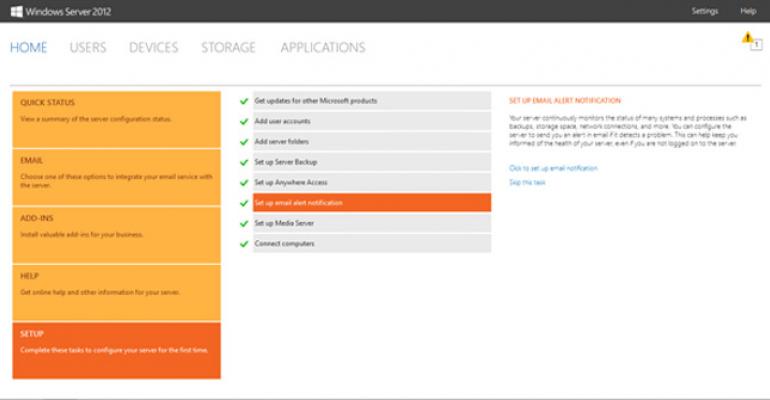 Regular readers of this site know that I’ve been writing about Windows Server 2012 Essentials for months and have recently started a series of articles explaining how to integrate this solution into a home office or small business. That’s not coincidental: Even in pre-release form, Essentials 2012 was good enough to form the backbone of my own home office.

But now that Windows Server 2012 Essentials is complete and ready for sale, I’d like to step back for a moment and explain its major features and capabilities. As you’ll come to see, Essentials 2012, which consolidates next-generation versions of Windows Small Business Server (Essentials and Standard), Windows Home Server, and Windows Storage Server Essentials into a single product, is a solid, impressive offering.

What is Windows Server 2012 Essentials?

I compared and contrasted these two versions last week in Windows Server 2012: Foundation vs. Essentials, but the differences boil down to a single important point: Essentials 2012 is aimed at home offices and small businesses with absolutely no IT infrastructure, whereas Foundation is more closely aligned with the mainstream Server versions from a management perspective and assumes you have some in-house (or partner-based) IT support.

Compared to Standard and Datacenter, Essentials supports only 25 users or less, does not offer the Hyper-V virtualization infrastructure or the Server Core (or hybrid) install types. But these capabilities make no sense in a small business environment. And Essentials 2012 offers a wide range of features that you can’t get in Standard or Datacenter, each of which is laser-focused at Essentials 2012’s core market. Essentials is much, much easier to set up and manage than any of the other Windows Server 2012 versions.

The one big exception to this rule is that Essentials 2012, unlike SBS Standard 2011, does not offer on-premise versions of Exchange, SharePoint, SQL Server, and WSUS (Windows Server Update Services) out of the box, though of course you are free to install them separately if you’re a masochist and have money to burn. Microsoft—and I agree with this decision, incidentally—does not expect customers to go down this route, however. Instead, Essentials 2012 has been architected for what home office and small business customers are really doing today: Integrating with online services. As such, you can integrate the product with hosted services through Office 365, or hosted Exchange, and even access Microsoft’s mysterious Windows Azure for cloud-based backups.

As part of Setup, Essentials 2012 prompts you to create an Active Directory (AD) domain, similar to how SBS Essentials 2011. This is the simplest AD domain set up I’ve ever experienced, and once you’ve installed the bundled Connector software on client PCs (Windows 7 and 8 are supported), you’ll never need to do any more domain configuration again. Essentials 2012 supports both home- and business-oriented versions of Windows, though of course only the business versions can join the domain. You home office users will just need to supply an admin login during the Connector Setup as I wrote about in Windows Server 2012 Essentials: Connecting Windows 7 and 8 Home Versions.

As with its “Colorado” server predecessors, Essentials 2012 utilizes a simple management console called Dashboard, and this one’s the best yet, with easy to understand post-Setup configuration tasks you can step through—automatic update, user accounts, server folders, Server Backup, remote access, email alert notifications, media sharing, and computer connections—to ensure your environment is not just up and running but optimally configured.

Speaking of which, thanks to integration with Microsoft’s Best Practices Analyzer, Essentials 2012 will trigger alerts—through the Dashboard, on PCs, or via email—if the server falls out of step with what Microsoft thinks is best, configuration-wise. These alerts can get a bit annoying at first—as outlined in Windows Server 2012 Essentials: Coping with Alerts—but they settle down over time, as you fix issues, judiciously ignore the ones you know are superfluous, and begin to understand the system.

While Server 2012’s more advanced server management tools, like the new Server Manager and even old-school tools like Active Directory Users and Computers, Group Policy Management, and the like are all available from Essentials 2012, you won’t need them for the most part. Using just Dashboard, you can configure virtually all of the server’s features, and this interface is much simpler than the alternatives.

This simplicity extends to interesting areas. Using a basic wizard, you can configure both folder redirection and Group Policy across connected (domain-joined) PCs in a single fell swoop (!), and if you integrate with Office 365 (as noted below), you can easily link domain user accounts with Office 365 user accounts and manage them from a single place.

If you’re familiar with the history of Small Business Server, you get that this basic capability—taking previously complex Server tasks and making them so simple that anyone could complete them successfully—has been a hallmark of this product line for over a decade. SBS may be dead in name, but Essentials 2012 continues this trend nicely.

As with Windows Home Server and SBS Essentials 2011, Essentials 2012 provides a wonderful centralized PC backup capability that includes both image-based system backups and, new to this release, centralized File History backups for Windows 8. When you connect a Windows 8-based PC to the server, File History is automatically enabled and centralized on the server. (File History also caches the most recent document revisions on the PC for offline use.)

Windows Home Server fans know that Microsoft implemented a wonderful data duplication and storage pooling feature called Drive Extender in the first version of that product and then killed it off in WHS 2011. Well, Drive Extender is back, baby, and this time it’s better than ever. Now dubbed Storage Spaces, this feature expands nicely on Drive Extender by adding better replication, NTFS and drive letter compatibility, and cross-platform support with Windows 8. I’m using Storage Spaces to pool 12 TB of data, spread across 4 3TB disks, in a resilient and redundant set up that is better, simpler, and less error prone than any RAID set up.

And if you’re familiar with how Storage Spaces is configured on both Windows 8 and Windows Server 2012 (Standard, Datacenter, and Foundation), you know that Windows 8 utilizes a simple, Control Panel-based utility whereas the Server version is configured through a complex Server Manager-based interface. Essentials? It offers both interfaces, and the default is the simple Control Panel interface. Obviously.

In a nod to WHS users, Essentials 2012 provides standard, DLNA-style media sharing capabilities, so you can share music, photos, and videos over your home office network—or over the Internet through the product’s remote access feature—to PCs, and devices like the Xbox 360. I wrote more about this functionality in Windows Server 2012 Essentials Tip: Enable and Configure Media Sharing.

If you’ve ever tried to configure DirectAccess, VPN, IIS, or Remote Desktop Services/Terminal Services on previous Windows Server versions, you’ll laugh out loud when you see how simple this functionality—called Anywhere Access—works in Essentials 2012. This product lets you integrate the server with an Internet domain (using your own custom domain or free one supplied by Microsoft), with single check-box options for remote VPN-based access and Remote Web Access.

This means that your users can access the home office/small business network from the road seamlessly using the interfaces of their choice. They can access server shares or run Remote Desktop sessions to the server or connected client PCs as if they were sitting on the local network or use a nice web-based interface to access files, PCs, the server, or media sharing. I wrote more about this functionality in Windows Server 2012 Essentials: Access The Server Remotely.

Whereas previous SBS versions offered simpler than usual but still complex access to on-premise servers like Exchange, SQL Server, and SharePoint, Essentials 2012 takes Windows Server into the 21st century by working the way real home offices and small business do: It integrates with online services.

Naturally, those services all come from Microsoft out of the box, though an extensibility model means that third parties can add integration with any online service. But in the product, you get connectivity with Office 365 (previously a separate add-on for SBS Essentials 2011), hosted (or on-premise) Exchange, and, new to Server 2012, Windows Azure Online Backup. (I’ve not tried the latter, sorry.)

The Dashboard also includes integration with Microsoft’s PinPoint, the new online store for Essentials 2012 add-ons. From here, you can browse through available add-ons and download them and install them to your server. (When I wrote this review, only add-ons for SBS Essentials 2011 were available.)

If your small business grows and exceeds the 25 user cap in Essentials 2012, Microsoft is for the first time offering an in-place upgrade to Windows Server 2012 Standard. (In the past, you had to do a more complex migration.) I’ve not fully explored this option, but according to Microsoft, this upgrade brings over all of the unique Essentials 2012 features—centralized PC backup, network health alerts, and so on—to Microsoft’s mainstream server, and provides access to Hyper-V. There is one limitation: Many Essentials 2012 features—like centralized PC backups—will still be limited to the first 25 users. But I’m surprised Microsoft’s even allowing this. Now there’s no penalty for being successful.

(And yes, I can already hear the enthusiast’s mind working here: So you’re saying I can get both Essentials 2012 and Hyper-V on one machine by doing an in-place upgrade? Yes. I am saying that.)

As a forward leaning product, Essentials 2012 requires a modern Windows version, either Windows 7 or Windows 8. You will need to install the Connector software, which adds two applications, LaunchPad and Dashboard, the latter of which is a RDS-style Remote App experience. LaunchPad provides a handy front-end to key server features, while Dashboard of course lets you administer the server without remote desktoping in.

I wrote more about these applications in Windows Server 2012 Essentials: The Client Experience.

Windows Server 2012 Essentials hits at a sweet spot of the market and provides an amazing range of powerful functionality in a package that is disarmingly simple to use. Those with Windows Server experience, however, are free to plumb the depths of Microsoft’s more advanced administration tools. But why bother? This is a server solution that the masses will be able to set up, configure, and use, and one that addresses the real world needs of home office and small business customers. Highly recommended? You bet: I’m using it myself.