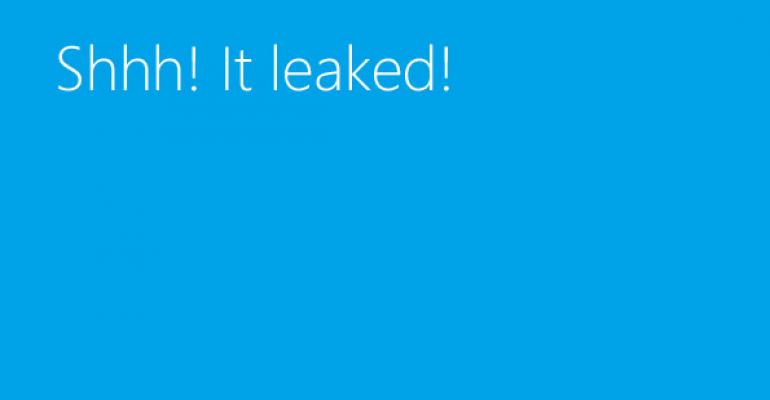 Finally, a decent look at the next version of Windows 8

Tired of speculative blog posts about Windows “Blue,” the upcoming interim update that will allegedly fix all the problems in Windows 8 and put Microsoft back on course? Speculate no more: Blue has leaked, and now we have a much better idea of what this release really contains.

Spoiler alert: It’s exactly what you should have expected, a spit polish update to what’s already available in Windows 8, not a mulligan re-do.

According to the Polish tech blog WinForum, a leak of an “alpha” version of Blue—not what Microsoft would call it, but whatever—or build 9364 has appeared online. By comparison, Windows 8 is build 9200.

Like Windows Phone 8, Windows 8 “Blue” sports more tile sizes now, but Blue ups the ante by adding both new smaller and larger tile sizes. The smaller size is obvious, it’s just a tiny square, a la Windows Phone, but the bigger one is surprising: It’s a double-tall (square) version of the currently-largest tile.

As important—and this is something I expect to see added to Windows Phone “Blue” as well—you can now customize the colors of individual tiles. It’s about time. Update: This appears not to be the case in the leaked build, sorry. --Paul

You can now personalize the desktop directly from the desktop, instead of figuring out how to get into PC settings. Smart. And you can now choose between a basically infinite range of background and accent colors, instead of being stuck with a select few of each. Also, it's possible to name Start screen groups without going into semantic zoom mode.

The current Snap mode, which is hard-coded to a particular pixel width, is almost useless, so you’ll be happy to hear that Blue adds a new Snap view, in which two apps can be snapped side-by-side with each taking up 50 percent of the screen. (This is one Blue feature I had heard about, so I can at least confirm the veracity of this bit.)

And here is the second Blue feature I had heard about previously: More, but not all, of the settings in Control Panel have been ported to the Metro-based PC settings, yet another indication that the desktop environment is on the way out. I was told that the Display settings are available in PC settings now, for example. But there’s a lot more in the screenshots: New Home and Lock Screen settings groups (that may replace Personalize), Screen (as I had heard about), Accounts (replacing Users), SkyDrive, Privacy, Network, Apps (which includes sub-groups, new to Blue, for Notifications, App sizes, Search, Share, Defaults, and Switching), Time & Language, Update & Recovery (previously part of General), and so on.

The grid of icons in the lower-right of the Settings pane has gotten a small visual update.

The Devices pane has been updated with new icon treatments.

Yes, there’s a new version of IE coming, and it will be part of Blue.

I could be wrong but it looks like there are now Metro-style Alarms (as during the Windows 8 Beta and in Windows Phone) and Sound Recorder apps. They could be third-party apps, however.

Setup appears to be largely unchanged from Windows 8, though the theme color picker is styled a bit differently. The desktop looks the same, complete with ominous pre-release warnings.