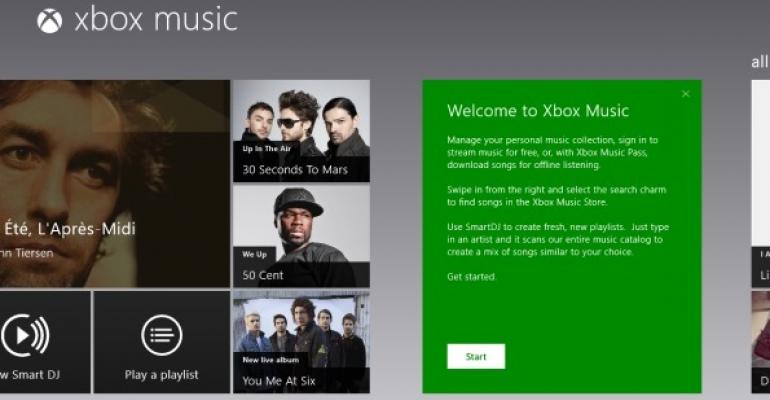 In addition to the telegraphed updates to the Windows Mail, Calendar and People apps, Microsoft this morning also silently delivered an important update to the Xbox Music app. And while there isn’t a single major new features, there are many, many small changes that should please anyone struggling to use this app or the new services that back it.

As you may know, I’m writing a free eBook about these services and this app called (for now) Xbox Music Book. This app update will necessitate a small update to the book manuscript, which I’ll provide today or tomorrow depending on my schedule.

So what’s new? Here are a few that stand out.

Better features communication. Throughout the Music app UI, there are now descriptive text boxes explaining how things work and what you can do to have a better experience. This is similar to what Microsoft did with its SkyDrive app.

Music matching. In the previous version of the Music app, you could only manually match albums to the Xbox Music Store, making that content available through your cloud collection (or what Microsoft is here calling “music in the cloud.”) In this version, you can now trigger an automatic match of your collection, which is nice. But it still won’t match music that is not in Xbox Music Store; this is a feature of the matching services offered by Amazon, Apple, and Google.

View filtering. Users with big music collections previously complained that the Music app offered no simple way to traverse long lists of artists, albums, or songs. Now you can via a semantic zoom-like feature that lets you jump more easily through these lists.

More obvious downloading. Music that's been matched to the Xbox Music Store can now be downloaded more obviously via small download icons to the left of the content.

There’s probably more, but since Microsoft hasn’t (yet) documented this update, I’ll need to spend some more time in the app. I’ll do that while going over the Windows 8/RT section of Xbox Music Book line-by-line.