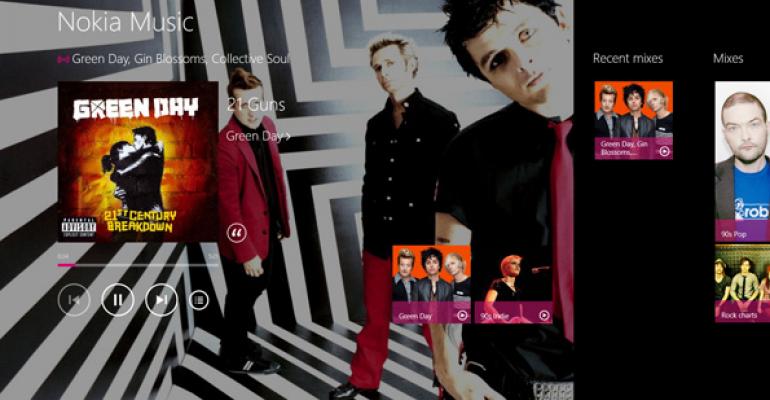 Note: This pick is an update to a previous pick and covers a major revision to the app.

Many online music services, such as Pandora, offer both free and paid streaming music offerings that work much like Internet radio stations. Nokia Music does do this, but it requires a $3.99 per month subscription fee, so it’s not really the same thing: If you don’t pay for Music+, all you get are 30 second clips, rendering the app essentially useless.

But Nokia Music isn’t just about streaming radio, or mixes, as Nokia calls it. For starters, it can play music on your PC, a feature missing from Pandora (but available in Spotify).

You can also download mixes for offline use, a nice touch, and a feature that’s not available even in the paid version of Pandora. And new to the recent update, you can also purchase albums and songs directly from the app and download them to your PC. That’s not too shabby for $3.99 per month.

For a lot of people, however, that extra functionality may not justify the added expense.

Nokia Music provides the same type of streaming rights, though it’s focused exclusively on “mixes”—what Xbox Music calls Smart DJ mixes, or Internet radio-like playlists are populated based on an artist you like. So you can’t arbitrarily play an artist, a particular album, or individual songs, as you can with Xbox Music Pass, unless you happen to have that music on your PC.

Put simply, Nokia Music offers a compelling alternative to Xbox Music, especially for those who are more interested in hearing radio-like mixes rather than specific playlists.

The interface is still very pink, which I complained about in the original release. This color scheme may be a bit of a turnoff, depending on your aesthetic leanings. I do wish you could configure the colors.

There are some unique touches though, including synchronized lyrics, a feature not available in Xbox Music.

You also get recommendations in the Now Playing area, and a nice collection of curated mixes maintained by Nokia. And the mixes you create yourself can be based on one to three artists; with Xbox Music, radio stations are based only on a single artist.

There are some good Windows 8 integration bits too. There’s a nice option—similar to what Music + Videos can do on Windows Phone—where Nokia Music can replace your lock screen with artist imagery during music playback. You can pin mixes to the Start screen, of course. And the live tile animates with the currently playing artist imagery.

Overall, Nokia Music looks like a pretty strong entry, assuming you’re not the type that needs to micromanage a local music collection. I’m looking at doing a deeper comparison of cloud-based music services like this—Xbox Music Pass, Rhapsody, and Spotify would fall into this as well—in the future, and Nokia Music is definitely in the mix, if you’ll pardon the pun.

In the meantime, Windows 8/RT (and Windows Phone 8) users should check out Nokia Music: This just may be the music service you’ve been looking for.

You can download Nokia Music for Windows 8 and RT from the Windows Store.