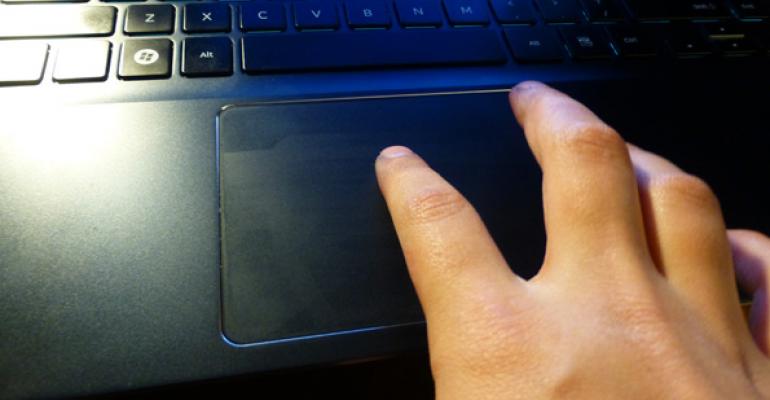 Most people understand that Windows 8 includes integrated support for mouse, keyboard, and touch screen interfaces. But few realize that Windows 8 also supports multi-touch gestures in the trackpads that are commonly found on laptops and Ultrabooks.

Plus, you may find that you enjoy using trackpad-based gestures.

I first wrote about Windows 8 trackpad gestures in Windows 8 Release Preview: New Trackpad Gesture Support. Two things have changed since then—Windows 8 is, of course, released, as are the trackpad drivers you need to make this functionality work—but the basics remain the same. That is, the following gestures are available:

Pinch zoom. You can pinch (and “reverse pinch”) on the trackpad surface to zoom in compatible apps and experiences, such as a photo you’re viewing in the Photos app.

Charms. To display the Charms, you slide in on the trackpad surface from the right edge of the trackpad.

Switcher. To access the new Switcher interface, you slide in on the trackpad surface from the left edge of the trackpad.

App bar. To display an app’s (or the Start screen’s) app bar, you slide in on the trackpad surface from the top edge of the trackpad.

Rotate. An uncommon gesture (and it could be disabled by default), this lets you use two fingers to rotate an onscreen display, such as you might want to do in an image editing solution.

In addition to the stock gestures, Microsoft of course continues to allow trackpad makers to add their own device-specific gestures too, as well as various customizations. So even if you are seeing the gesture support described here, you should head over to the device maker’s support web site and see if new Windows 8 drivers are available. I do know that two of the biggest makers of trackpads, Synaptics and Elan, have drivers available now:

I’ve only tested the Elan drivers so far, but they also include a nice control panel for configuring the trackpad the way you want it.

And in some cases, it may be better to seek out drivers from your PC maker. For example, Lenovo has a support page for Windows 8 beta drivers for its ThinkPad line that includes Synaptics UltraNav Driver sets.