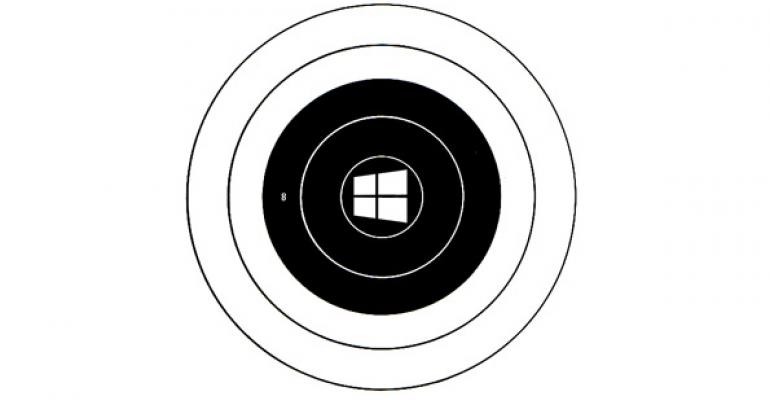 Windows 8 Sales Well Below Projections, Plenty of Blame to Go Around

Uncertainty could turn Windows 8 into the next Vista

Update: Based on the feedback, some have misunderstood this post: Microsoft has not met its internal projections for Windows 8 sales. Given this, as it’s happened, I provided some possible explanations for what went wrong (in addition to Microsoft’s finger pointing at PC makers). Those are simply my best guesses, not "facts," and certainly debatable. But you can expect Microsoft to eventually release sales numbers for Windows 8, numbers that it will use to prove (or at least contort) that everything’s just fine. That doesn’t change the central premise here, which is the reason I published this post: Internally, Microsoft is blaming PC makers for Windows 8’s slower-than-it-expected start. But I think it’s more nuanced than that. Even Vista sold hundreds of millions of copies a year. Windows 8 will certainly do better than that. --Paul

Sales of Windows 8 PCs are well below Microsoft’s internal projections and have been described inside the company as disappointing. But here’s the catch: The software giant blames the slow start on lackluster PC maker designs and availability, further justifying its new Surface strategy. But Windows 8’s market acceptance can be blamed on many factors.

One of my most trusted sources at Microsoft confirmed Windows 8’s weak start this week. And with all of the drama surrounding Windows 8 and the recent, unexpected departure of Windows chief Steven Sinofsky, rumors are sure to swirl. But looked at logically, some trends emerge.

Microsoft blames the PC makers. My source cited to me the PC makers’ “inability to deliver,” a damning indictment that I think nicely explains why the firm felt it needed to start making its own PC and device hardware. In a related conversation with Microsoft the week after BUILD, I floated the notion that the company’s retail store expansion could one day lead to it becoming the number one in-store experience for PC makers’ wares, a not-so-subtle change in their relationships. This idea had clearly been considered as a possible future, leading me to believe that Microsoft has indeed soured on its traditional partner relationships and is looking to shake things up.

Lingering questions about Sinofsky. While Steven Sinofsky was removed from Microsoft because of his divisiveness and his ostracizing of far too many valuable executives and employees, many will continue to wonder if some failing in Windows 8 (and Windows RT) is what in fact led to his ouster. The timing on his departure couldn’t be worse, and while the promotion of his closest lieutenant, Julie Larson-Green, was clearly designed to promote the notion of orderly transition, the fact that she wasn’t made president of the Windows division hints at more changes to come. One of Microsoft’s many problems under the Sinofsky regime was that it wasn’t at all transparent: Its current lack of transparency about the succession plan for Windows is just as problematic because it makes those outside the company distrust anything they say. This lack of trust will cause consumers to look elsewhere.

It’s the economy, stupid. Microsoft launched Windows 8 at a time of great economic uncertainty and midstream in business deployment of the product’s predecessor, Windows 7. It doesn’t take a tech analyst expert to know that businesses are simply not going to deploy Windows 8 in great numbers. And while that’s obvious, it also means that only consumer acceptance of Windows 8 can possible help this release match the success of its predecessors. But consumers have plenty of choice these days, and many are quite comfortable stretching out the next PC purchase and using a companion device, like an iPad or other tablet. The problem is, they may discover that’s all the computer they need and simply opt out of Windows going forward.

Confusing range of device types. Faced with a reimagined, touch-focused Windows that is more at home on mobile devices than traditional PCs, and responding to increasingly hysterical pleas from Microsoft to innovate more, PC makers attempted to do in hardware what Microsoft did in Windows 8’s software: Create hybrid devices that could serve all needs. Unfortunately, the result is a mess of different hybrid designs, rather than a concerted, industry-wide effort to consolidate around a few basic designs. The result is obvious: Confusion, both on the PC maker side—where different companies are pushing a variety of different design types—and with consumers, who simply don’t know which, if any, device types to make. I love Lenovo, but consider this one PC maker’s designs: The firm is selling traditional laptops and Ultrabooks, touch-based laptops and Ultrabooks, “multimode” convertible laptop/tablets (the Yoga line), a traditional convertible Ultrabook (ThinkPad Twist), slate-type tablets (ThinkPad Tablet 2), slate-type tablets with keyboard docks (IdeaPad Lynx), and then a related but separate line of Android tablets. And that’s just the portable computers.

Windows 8. It’s a floor wax. No, it’s a dessert topping. Microsoft’s new whatever-the-F-it-is operating system is a confusing, Frankenstein’s monster mix of old and new that hides a great desktop upgrade under a crazy Metro front-end. It’s touch-first, as Microsoft says, but really it’s touch whether you want it or not (or have it or not), and the firm’s inability to give its own customers the choice to pick which UI they want is what really makes Windows 8 confounding to users. I actually like Windows 8 quite a bit and can’t imagine switching back. But I do understand the complaints of customers who aren’t getting what they wanted or asked for.

Windows RT. Imagine Apple announcing a major new version of iOS and then releasing a new tablet that runs Mac OS X instead of that new iOS version. Doesn’t make a lick of sense, does it? Well, that’s what Microsoft did: On the day that Microsoft launched Windows 8, it also launched Surface … running Windows RT. And while Windows RT is obvious a version of Windows 8, it’s a largely incompatible version of Windows 8, and one that runs in the resource constrained ARM environment. That means no existing desktop software will run on these devices, not to mention lots of hardware. Confusing? You bet. And I actually get this stuff. What’s a typical consumer to think?

Surface. And speaking of Surface, it bears repeating that Microsoft is now competing directly with its partners. But even educated consumers are confused by this entry. Those that do understand they should skip Windows RT now have to wait until January to see what a Surface Pro is like. And that means ... you guessed it … they’re simply going to wait. How could Microsoft launch Windows 8 and not launch Surface Pro? It makes no sense at all.

Intel. If you’ve decided to skip Windows RT—which I think is wise, for now—you now face a strange choice on the Intel side. You can go with traditional “Ivy Bridge” type systems, providing the familiar performance and compatibility you’ve come to expect from PCs. Or you can go with new Atom “Clover Trail” systems, which can and do resemble Windows RT devices in ways both good—they’re thin, light, and get great battery life—and bad—they’re also resource constrained, with 2 GB of RAM and tiny storage allotments. This further muddies the water for consumers, triggering yet another “wait” reaction.

The net effect of all this stuff, I think, contributes to a wait-and-see approach with Windows 8. And that is exactly the opposite of what Microsoft and even the broader industry should want at this time. In this way, the Windows 8 launch is much like that of Vista, where a nagging (and in that case, tech blogger-led) cabal of disappointed voices dominated the discussion at launch and torpedoed the product before it had a chance. Windows 8 is no Vista, in many ways. Until it is.

All of this was avoidable.