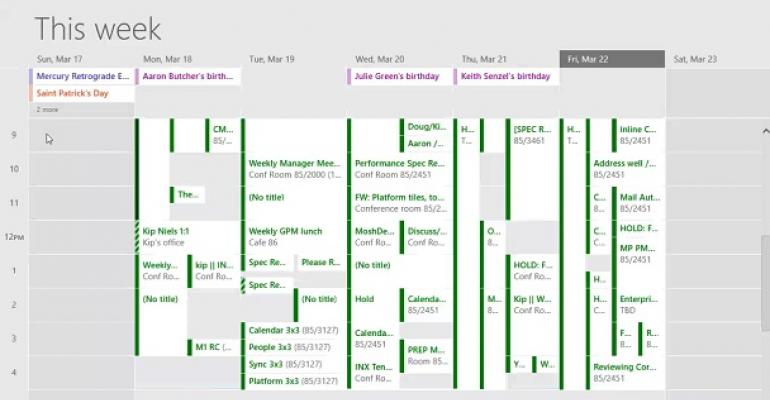 Microsoft said it would continue to support Google Calendar in the Calendar app. That didn't happen

This week’s news about long-overdue updated communications and Xbox apps for Windows 8 and RT was a bounty of good news. Well, mostly. Buried in the fine print of the Calendar app update is a surprisingly revelation: Microsoft has turned off support for Google Calendar, and not just for new accounts as previously promised.

This stunning turnaround is just the latest bit of bad news in the Google/Microsoft war over EAS, or Exchange ActiveSync. If you’ve been reading along, you may recall that Google effectively declared war on Microsoft back in December when it announced that it would be killing off its support of Exchange ActiveSync (EAS) for individuals in products such as Gmail (email and contacts) and Google Calendar.

EAS is a de facto industry standard, owned and licensed by Microsoft, which provides push-based access to email, contacts, calendar as tasks to mobile devices over the air. Google, like virtually every company in this space, supported EAS in its email and calendaring services. And what this means is that it was incredibly easy to access Gmail/Google Calendar from such Microsoft platforms as Windows Phone and, more recently, Windows 8/RT: The Mail, Calendar, and People apps—those communications apps that were just updated—all natively support EAS.

When Google made its explosive December 2012 announcement, we collectively looked to Microsoft to see how the firm would respond. Curiously, this is one case where the Windows Phone team stepped up to the plate and the Windows team did not.

In late January, the Windows Phone team announced that it would add support for CalDAV and CardDAV—the calendaring and contacts protocols, respectively, that Google is supporting for its services—to Windows Phone this year. (One can connect to Gmail with IMAP, so that is covered as well.) This was surprisingly good news, and though one can reasonably expect this to take a while, at least they were transparent about it.

So the Windows 8/RT communications apps were updated this week, as you know. And the updated Calendar app contains a nasty little surprise: That promise that “Existing EAS connections to Google accounts will continue to function” was a lie: Microsoft has in fact removed support for EAS-based Google accounts in its communications apps. You can add a Gmail account to Mail using IMAP. But you can’t access your Google Calendar from Calendar: The only supported account types are Hotmail and Outlook, both of which are just EAS connections.

So who’s to blame?

That said, Microsoft could have done a better job of communicating this change. The official blog post announcing the updated communications apps doesn’t mention this issue at all.

I’m looking for a workaround for Google Calendar. If you have any thoughts about this, please let me know.