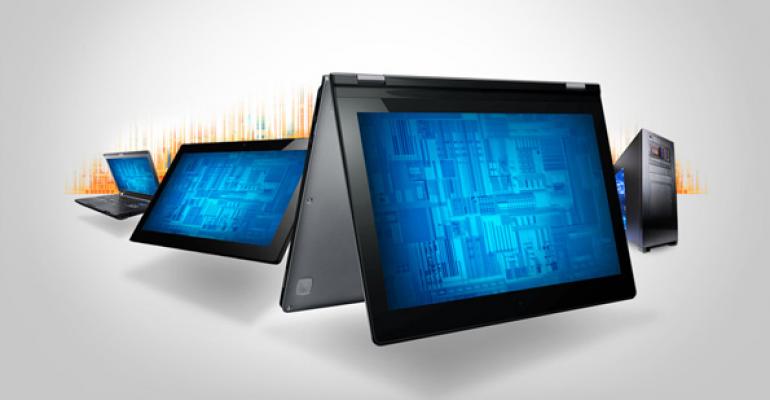 Will Haswell Save Windows 8?

And what the heck is Haswell, anyway?

With the launch year of Windows 8 under constant scrutiny and criticism, Windows watchers are turning their attention to ecosystem changes that could turn things around in the coming year. Windows 8.1, new mini-tablets, and an ever-growing apps and games marketplace are among some of these hopes. But a new generation Intel microprocessor platform could make a huge difference as well.

That hardware platform, codenamed “Haswell,” is really just a next-generation version of the Intel Core processor family, which you may know by such monikers as i3, i5, and i7, where the bigger numbers represent more processing power, generally speaking. (The current-, or now previous-generation, version of the Core chipsets are known by the codename “Ivy Bridge.”)

So what’s new in Haswell, the fourth generation Core processor? And why is this a big deal, specifically for Windows 8?

For all the excitement around Haswell, you may be surprised to discover that a lot of the specs for this chipset seem to carry over unchanged from its predecessor. For example, Haswell, like Ivy Bridge, is built using a 22 nanometer (nm) process and uses what Intel calls 3D tri-gate transistors. But while Haswell offers only minor performance improvements over equivalent Ivy Bridge chips overall—modest changes to pure processing, but more significant for the integrated graphics—the biggest single change this time around is power management. And while that may not seem very sexy, it’s in fact incredibly important to mobile devices and thus to Windows 8.

According to Intel, Haswell will enable “all day experiences” on the mobile PCs and devices that are powered by these processors. The reasons for this vary from the dramatic to the evolutionary. On the dramatic front, Haswell picks up some power management chops from the System on a Chip (SoC) designs that were, until now, the purview only of low-end mobile chips like the Intel Atom and ARM. On the evolutionary side, low-power versions of Haswell still retain separate CPU and chipset but on a single package, allowing for a slight reduction in interior physical size requirements and thus somewhat smaller and lighter devices.

I’m not a hardware expert, and there are much better sites to visit if you’re looking for the nitty-gritty of Intel’s chipset advances. What you need to know, however, is that these advances mean that Haswell-based devices could deliver up to 50 percent better battery life than their direct predecessors. Using a real world example, we know that today’s Surface Pro tablet gets about 5 hours of battery life. So without making any other changes, a Haswell-based Surface Pro 2 could get about 7.5 hours of battery.

That’s significant. Not earth-shattering—my current Ivy Bridge-based Ultrabook routinely delivers 7 hours of battery life, for example—but it will be a big deal for individual devices that are upgraded to the new chipset. And it could lead to lighter and thinner new devices that also deliver better battery life (and even a small performance boost).

Like today’s ARM- and Atom (“Clover Trail)-based systems, these new devices will also behave more like smart phones than like PCs when it comes to wake times. That means you open the lid on an Ultrabook or convertible, or tap the power button on a tablet, and it comes on immediately, as your smart phone does. It also means that your next Windows 8 device should be able to stay updated via online downloads while in a very low power state while the machine appears to be off. This ties into Microsoft’s desire with Windows 8.x to move the PC away from the traditional computing world and into the mobile computing devices future.

I think it’s dangerous to believe that any one thing—Haswell, Windows 8.1, mini-tablets, whatever—will result in a Windows 8 renaissance. And of course, things will only get better as we move forward: Next year, for example, a new generation of Haswell, codenamed “Broadwell,” will offer an even smaller, lighter, and more power-efficient 14 nm build process.

Maybe by that time we’ll be talking about Windows 9. I don’t know. But if you did hold out on purchasing Surface Pro specifically or on the first generation of Window 8 devices generally, Haswell should trigger a reassessment, and I do expect Haswell-based PCs/devices to make a big difference. Certainly, I’ll be paying attention to Haswell-based PC and devices reviews as they appear over the coming months.