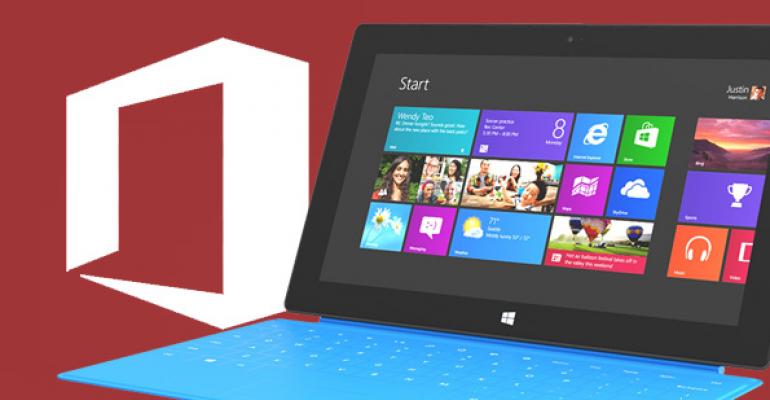 While the iPad has certain ecosystem advantages over the recently-released Surface with Windows RT, Microsoft’s entry does of course edge out the Apple device in some key areas as well. And one major advantage of the Surface over iPad is that it comes with a fully functional version of Microsoft Office.

You may have read otherwise. That the Office version included with Surface with Windows RT is in some way hobbled or limited, or available only for “non-commercial” use. None of this is strictly true: Office Home & Student 2013 RT, as this Office version is obtusely named, is the real thing, not some watered down mobile app such as the version Microsoft included with Windows Phone. It’s roughly equivalent to the Office Home & Student 2013 version Microsoft will soon be selling for customers with traditional x86 versions of Windows. (With some differences noted above.)

Here’s what you need to know about Office Home & Student 2013 RT.

Surface RT ships with a Preview version. Over time, Windows RT will automatically update you to the final, shipping version of Office Home & Student 2013 RT. But I wrote about how you can get the upgrade immediately in Microsoft Surface: Upgrade to Final Office 2013 RT. There’s no reason to wait.

There’s no Outlook. And there never will be. Office Home & Student 2013 RT ships with full-featured versions of Word, Excel, PowerPoint, and OneNote 2013, and you can download free Metro-style OneNote and Lync apps from Windows Store. This product does not, and will not, including a version of Microsoft Outlook. Instead, you can use the Mail, Calendar, and People apps that ship with Windows RT.

Non-commercial use. The licensing for Office Home & Student 2013 RT has gotten a lot of press since its “non-commercial” use clause seems to preclude using this suite to get real work done. Individuals can feel free to use Office RT however they want. But businesses that want to deploy Surface (or any other Windows RT device) can purchase a commercial license to cover work usage of Office RT. Ed Bott has written up a nice article, How much do you have to pay to use Office 2013 RT for work?, explaining your options. And I’ve written up a separate article about related work issues in Taking Surface to Work. But the fact remains: You can use Office RT for work.

Missing features. Part of the myth around Office Home & Student 2013 RT is that it’s somehow a watered down version of the “normal” Office suite with many missing features. It’s true that it’s missing some stuff—see Microsoft’s Introducing Office Home & Student 2013 RT Preview for a complete rundown—but I don’t find any to be hugely problematic. And seriously, give Microsoft credit for this port to Windows RT/ARM, which is pretty incredible.

I wrote more about Office RT in Office 2013 Home & Student 2013 RT Preview, so if you’re still unclear about what you’re getting—for free, by the way—be sure to check that out. But the big issue here is that Microsoft will be porting Office to the iPad (and to Android devices) in 2013. So is this inclusion of Office just a temporary advantage?

As I reported previously, Office for iPad (and other non-Microsoft systems) will only be made available as part of an Office 365 subscription. So where Surface with Windows RT users get Office for free, and perpetually, iPad users will need to pay, monthly, forever. And this is true whether the iPad version of Office is used for work or play. (Again, businesses that roll out Surface RT for work will need to pay for Office there as well.)

That much is a fact, but if I can speculate for a moment, I also suspect that the iPad/Android versions of Office will be very limited compared to Office RT, and that they will be more similar to the Windows Phone version of Office, or perhaps to the Office Web Apps. Assuming this is true, and that Office iPad is no Office RT clone, then that, too, will be a major advantage for Surface with Windows RT. It’s hard to imagine Microsoft doing otherwise.

But regardless, Surface with Windows RT will always have the pricing advantage. Surface for the win.