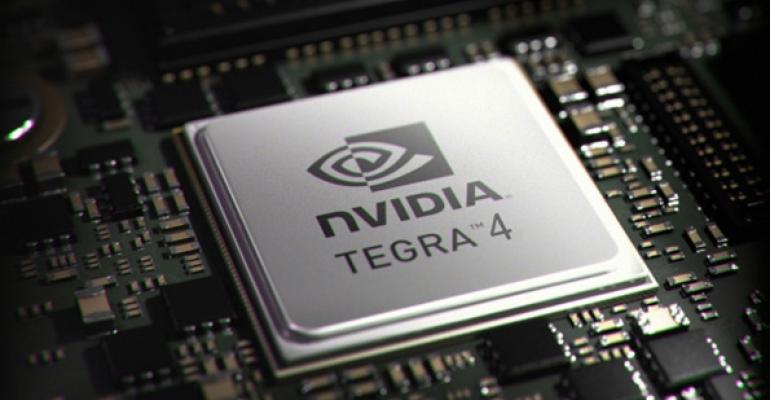 What Will Tegra 4 Mean to Windows RT?

NVIDIA this week unveiled the Tegra 4, which it describes as the world’s fastest mobile processor. Given the lackluster performance of Windows RT on the Tegra 4’s predecessor, I’m curious whether NVIDIA’s stated advances will lead to better Windows RT devices in the near future, and perhaps a new Surface RT.

According to an NVIDIA press release, the Tegra 4 offers both “record-setting performance and battery life,” and includes six times the graphics horsepower of the Tegra 3 used in the current Surface with Windows RT. It is also the first quad-core ARM processor, which NVIDIA says will result in 2.6 times better performance in web browsing and apps.

One of the big advances with this new chipset is its optional support for 4G LTE voice and data support via a separate, add-on chip that is “more efficient and 40 percent the size of conventional modems.” As I’ve noted, built-in (if optional) support for broadband cellular should be a given on any Windows RT device.

Indeed, one has to think this is the chipset Microsoft was targeting when it ported Windows 8 to ARM, resulting in Windows RT. But this also bears out my feeling that the initial Surface RT devices will be essentially orphaned as the rest of the Windows RT world moves on to these more powerful ARM chipsets. In this way, it’s possible that first-gen Surface (and other RT devices) will be like Windows Phone 7.x, something that resembles the real goal (in that case, multi-core Windows Phone 8 handsets) while being decidedly inferior and orphaned as a result.

All that said, what I don’t see in there is any hint about 64-bit capabilities or higher RAM allotments. According to Wikipedia, the arbiter of all information on the Internet, the TEGRA 4 is still a 32-bit design, and can be clocked up to 1.9 GHz. (Where the Surface RT runs at 1.3 GHz on a chipset that can be clocked to 1.6/1.7 GHz.) So this is still an evolutionary update in many ways.

Is this a big deal? I guess we’ll have to see what future Windows RT devices are like to know for sure.