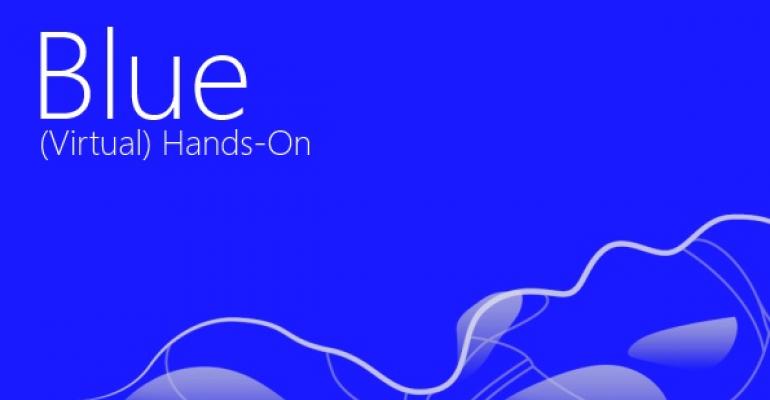 While my previous report about the leaked Windows 8 “Blue” build was based on screenshots posted to a Polish tech enthusiast forum, I’ve since gotten my dirty little mitts on the build and have installed it to a virtual machine. Based on a quick run-through of the build, I can say it’s real and that Blue is pretty much the combo feature pack/service pack we’ve been expecting.

If you haven’t seen it yet, please do read Windows Blue Leaks! before proceeding. This document is sort a delta guide to that original report, highlighting some of the information I didn’t discuss previously.

Windows Setup works as before, but as I noted in Windows Blue Leaks!, the first Personalize screen, where you pick a color scheme, looks a bit different. I didn’t show it before though: Here it is.

The rest of Setup looks as it does in Windows 8, including the painfully long color-cycling bit at the end.

There are indeed new apps included in Blue, more than I had expected: Alarms, Calculate, Sound Recorder, and Movie Moments are all in there.

I didn’t detect any obvious differences on the desktop. The version number has indeed been bumped (from 6.2 in Windows 8) to 6.3. I am curious/surprised by this.

Most of the existing apps do not support the new tile sizes. But Desktop and the new apps do, which I think is relevant. That is, the “core” apps in this build are the same we got in Windows 8 RTM. (That will change, of course.)

The new in-place group naming and other Start screen customization capabilities come courtesy of a new app bar button on the Start screen called Customize. What’s interesting about this is that you can’t even move tiles around until you access this new mode.

Further interesting is that the one app bar button that’s available there today—All Apps—is now gone.

And that “new” grid of icons at the bottom of the Settings pane? Those two tiles are colored differently because you can’t click them—because you’re using the system in a VM. They won’t look like that on a regular PC, methinks.

All the action in this build is in PC settings, and if you were looking for any further proof the desktop being eased out going forward, look no further than this. As noted in the previous report, there are a ton of new settings in there now, including many items that were previously only available in the desktop-based Control Panel interface. This is clearly an indication of how we get from here (Windows 8) to there (Windows 9, with potentially no desktop).

For example, the default apps interface has been  completely Metro-ized in this release:

But the best news here, potentially, is in SkyDrive, Files, an interface that suggests that SkyDrive file sync is coming to Metro and thus to Windows RT.

More soon, but even a quick spin around this early “Blue” build suggests a solid update. My only question, as ever: What’s taking so long?