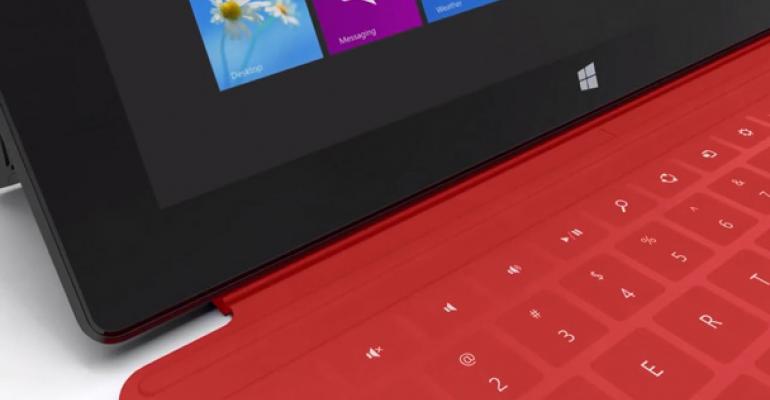 Surface RT PR, Round Two: The Tablet that Runs Office

Microsoft this past week began advertising Surface RT again. And the new tagline is interesting given rumors about Office on iOS and Android: Surface RT, Microsoft says, is the tablet that runs Office.

I have a couple of thoughts about this ad. But first, consider the voice over narration.

“Imagine you only needed to carry one device,” the ad intones, ignoring the ability to make phone calls and send SMS/MMS messages. “A device with the speed and capability of a laptop, but with the size and touch of a tablet. Imagine a device that runs Microsoft Office, with Word, Excel, PowerPoint and OneNote. Imagine a device with a USB port and a keyboard, so you can click in and do more. Now, stop imagining. Click in to Microsoft Surface. One device that lets you do so much more.”

One, obviously, they’re using Microsoft Office as a selling point. This make sense: For now, only Windows RT comes with a free version of Office. That’s going to change with Windows 8.1, by the way: Small, 7/8-inch Windows 8 Core-based tablets will also come with a copy of Office Home & Student 2013 when that update is shipping.

Two, the ad never actually explains that this thing runs Windows RT or that the device itself is Surface RT. It’s just Surface. On a couple of screens, there’s a quickie disclaimer—“Surface RT shown. Surface RT comes with Office Home & Student 2013 RT”—but it’s a blink-and-you-miss-it deal. They are clearly pushing the Surface brand here, even while what they’re selling is very specifically Surface RT.