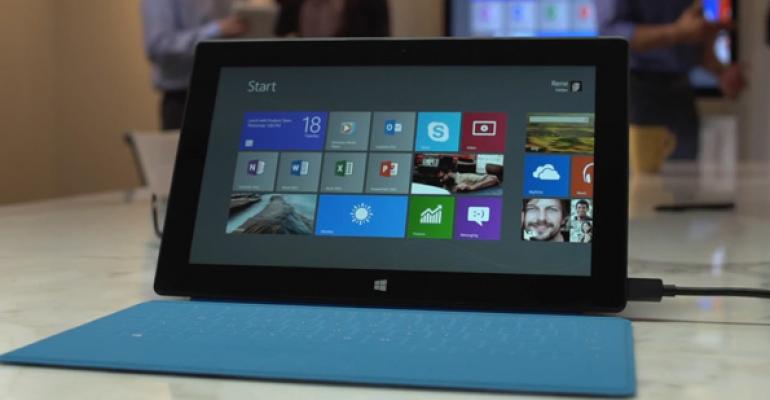 Microsoft makes its case for Surface with Windows 8 Pro

Microsoft has issued an overview video for its upcoming Surface with Windows 8 Pro tablet, which is far more powerful and versatile than the Surface RT unit currently in the market. Of course, it’s also more expensive. So this video highlights the differences, which basically amount to a single premise: Unlike Surface RT, Surface Pro is a real PC.

You can watch the video now on YouTube. It’s under a minute and half.

But here are some highlights:

Stupid new name abbreviation. Since the official name of this product is Surface with Windows 8 Pro, everyone on earth has been abbreviating it to Surface Pro, just as we abbreviate Surface with Windows RT to Surface RT. I will continue doing so. But with this video (and a related press release from the Surface Pro availability announcement), Microsoft has started using a new and lamer abbreviation: Surface Windows 8 Pro (i.e. no “with”). Sigh.

Pen. Unlike its RT-based brother,Surface Pro both supports and includes a pressure-sensitive electromagnetic pen. The video notes that this pen lets you “add a personal touch,” which is ridiculous, but also shows a very good use for the pen: It’s ability to tap tiny onscreen elements in powerful desktop applications like Adobe Photoshop. This is exactly where a pen makes sense, and even Surface RT users would benefit from a capacitive pen, which provides the same basic functionality, albeit without the same precision, pressure sensitivity, or eraser capabilities.

Desktop application compatibility. The video breezes by this point, but it’s worth highlighting: Surface Pro is fully compatible with all desktop applications, browser plug-ins, and hardware devices that everyone uses today. That’s a big deal.

More storage. Surface Pro comes with either 64 GB or 128 GB of storage, compared to 32 GB or 64 GB of storage with Surface RT. It also supports USB 3.0, a bit improvement over Surface RT’s USB 2.0. (Both support microSD).

Dual-purpose charger. Surface Pro’s power brick is significantly bigger than that of Surface RT, and unlike that latter device, the power connector isn’t right there, it’s at the end of a separate cord, as is often the case with PCs. But Surface Pro’s power brick also features a second USB 3.0 port for charging accessories. The device itself has just a single USB (3.0) port, as does Surface RT (which uses USB 2.0).

Mini DisplayPort. I’ve seen some interesting rationales for Microsoft using a different video-out port on the Surface Pro (Mini DisplayPort) than it does with Surface RT (micro-HDMI). The video notes its ability to broadcast video in “high definition” (though Surface RT can easily handle full HD 1920 x 1080). Of course, the Surface RT’s built-in display only handles 1366 x 768, while Surface Pro’s is full HD. This may be problematic, given the tiny size (10.6 inches) of the display.