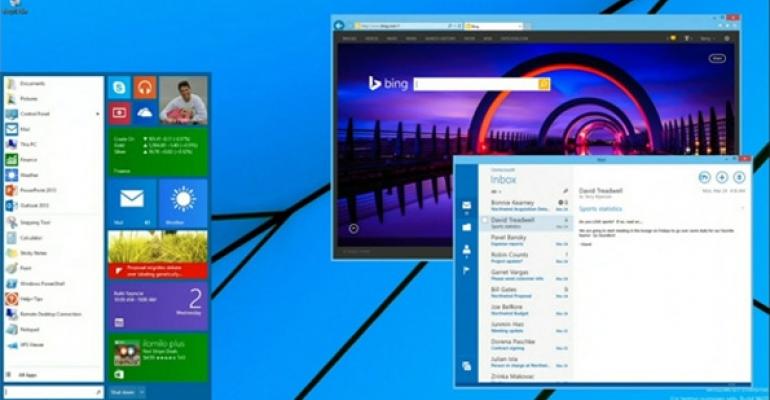 Not an option, but rather a new thing

To date, our understanding of the new Start menu that's coming in "Threshold," the next major Windows release that may or may not be called Windows 9 when it ships next year, is that it would augment the existing Start screen as an option of sorts for desktop users. But here's a surprise: That's not how it's going to work.

According to my sources at Microsoft, the new Start menu will instead be the entire Start experience in Threshold. That is, there won't be a Start screen and a Start menu. But you will be able to maximize the Start menu so that it takes up the whole screen and looks and works much like the Start screen does today in Windows 8.x.

Previously, we had described the Start menu as a backwards-compatibility option of sort, something that would give users on traditional PCs a more familiar app launching experience that worked from the desktop. In previous Windows versions, Microsoft had always offered such options as it advanced the user interface, but Windows 8 was notable in that it replaced the Start menu without providing even an option to use the old UI. In fact, in the summer before Windows 8 was released, Microsoft engineers very specifically stripped the legacy Start menu from the OS, in part so that third party utilities couldn't bring it back.

The new Threshold Start menu isn't based on the old Start menu. It is instead a new Start experience based on the Windows 8.x Start screen. It will likely auto-detect your PC type on first launch, and if the system boots to the desktop—as it does on traditional PCs in Windows 8.1 today, it will provide a menu that is roughly analogous, size-wise to the Windows 7 Start menu. But if you are using a tablet or other touch-based system with no keyboard, you will boot to a full-screen Start menu that looks and works a lot like the Start screen does now.

Users will be able to toggle between the two displays, I'm told, and configure it to work as they prefer.

Looking at this with fresh eyes, this approach actually makes more sense than our previous understanding of the new Start menu. It also explains why this feature was pushed back to Threshold: This isn't the type of change you could easily make in a quarterly update.