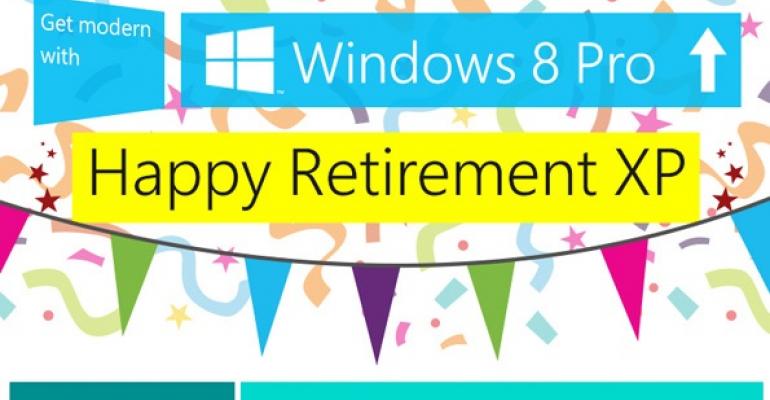 Silly XP Retirement Party Should be a Wake Instead

The time for celebration is over. Let’s move on

We’re awash in infographics these days and I have a few sources that are pawning increasingly less relevant infographics on me on a regular basis. But the release of a Microsoft Windows XP Retirement Party infographic this week has many up in arms, and for good reason. XP isn’t heading off to some peaceful retirement. It’s being led to the gallows.

And for the record, I have no problem with that. At all. Windows XP turns 12 years old this year—12!—a lifecycle that is literally four times the average in-market lifecycle of most Windows releases and over 10 times the in-market lifecycle of a typical Mac OS X release. Windows XP isn’t long in the tooth, it’s toothless. And while its once-vaunted feature-set was seen as exciting and interesting over a decade ago, it’s 2013 now. It’s time to say goodbye.

Microsoft, of course, has been trying to do just that. And despite the firm’s increasingly shrill warnings that the pending April 2014 support end of life (sorry, “retirement”) milestone is creeping right up on us as all pending dates must, many are still showing no sign of giving it up.

So let’s bring out the party balloons. How did they forget the clowns? (Discounting those who still rely on XP, of course.)

The infographic is depicted below, but you should consider clicking on this link to see the full-sized version. It includes what appears to be puppets at the bottom, though of course they’re really just people holding the balloons. (Subliminal message: Don’t be pulled along by XP!) And of course a lot of really nutso stuff about Windows 8. It should just say, “look, get Windows 7 for all we care. Just get off of XP. Please.”