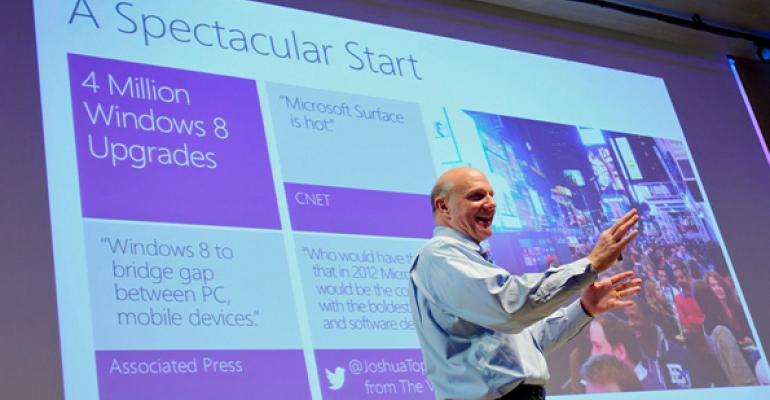 Calling out critics only makes sense when those critics are wrong

Microsoft’s communications chief has a tough job these days, and with Windows 8 is under attack from all sides he’s bravely called for a return to the center and a less partisan conversation about the new OS. There’s just one problem: The periodicals he’s called out for engaging in “sensationalism and hyperbole” are in fact right about Microsoft’s strategy. And ignoring that is the real problem.

Full disclosure: I like Frank Shaw quite a bit. He’s got a tough job and to be fair he’s doing the right thing in defending his company.

But in a recent post to the Official Microsoft Blog, Mr. Shaw called out The Financial Times and The Economist, two staid publications that made the mistake of correctly identifying the core problem with Windows these days. I can only imagine what he thinks of me right now.

In the wake of a mini-publicity tour in which Microsoft executives tried to paint its about-face with Windows 8.1 “Blue” as an example of it “listening to customer feedback,” these publications have correctly suggested that this never would have happened had the Windows team simply listened to customer feedback during the six year buildup to Windows 8 instead.

The Financial Times critique is admittedly bruising. The publication describes “Blue” as “one of the most prominent admissions of failure for a new mass-market consumer product since Coca-Cola’s New Coke fiasco nearly 30 years ago.”

The Economist, meanwhile, wrote that customer reaction to Windows 8 is so bad that Microsoft is “attempting a U-turn” with the coming “Blue” update.

The first time Mary Jo Foley and I mentioned Blue on the Windows Weekly podcast, months ago, Leo Laporte asked us what it was. “It’s an apology,” I blurted out. It was an attempt at humor, but if you’re familiar with my style, you also know that there’s always some honesty in there too. And if you compare this view with what the Financial Times and Economist wrote, you’ll see that all three are in fact basically saying the same thing.

“There was even a time when acknowledging that you were listening to feedback and acting on it was considered a good thing,” Mr. Shaw wrote. Fair enough. But again, the Windows team just spent over 6 years ignoring feedback. It’s inconceivable it would have shipped something as disjointed as Windows 8 if it had even been listening just a bit to feedback. This feedback was loud and clear. It’s never changed.

“Windows 8 is a good product, and it’s getting better every day,” Shaw claimed. Well. Not every day. Not even every week. It’s not improving quickly enough, in my opinion, in sharp contrast to what other teams are accomplishing at Microsoft these days. But … It is a good product, one that is not unusable or broken as others suggest. Certainly, it is improving.

Mr. Shaw says we should “pause for a moment and consider the center.” But it’s impossible for the man who communicates officially for Microsoft to do that. He is by definition biased for Microsoft, just like any MVP is. That doesn’t mean you can’t trust these people. It just means that you need to know where their bread is buttered.

My own view of Windows 8 in fact represents the center, I think: It is a good product, an improvement over Windows 7, albeit a messy one with an extraneous mobile OS bolted onto the side. It needs to be improved, and quickly. Blue is a start, but it’s not enough.

“So perhaps this week’s lesson is look less to the edges and more to the center. There’s more light there.”