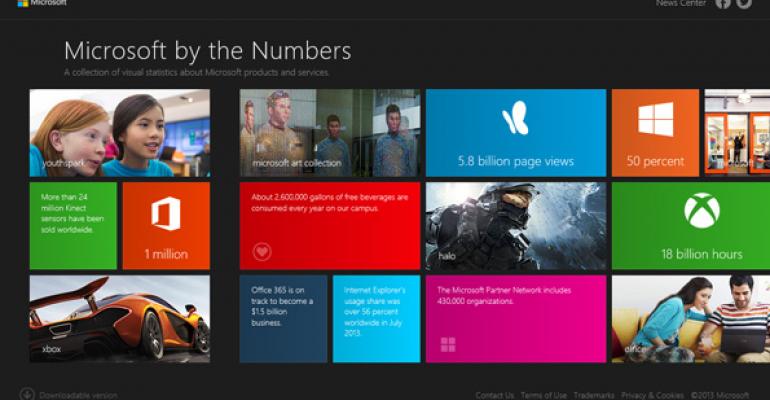 Microsoft by (Some of) the Numbers

Microsoft today revealed a new web site called Microsoft by the Numbers that it says highlights some of the important (and not-so-important) facts about its business and the company. But I’m curious what the point is. We know that Microsoft is big. Does this suggest a bit of nervousness about its relevance in an ever-changing world? And what about the numbers they’re hiding?

“Sometimes numbers are more effective at telling a story than words,” Microsoft corporate vice president of communications Frank Shaw notes in a post to The Official Microsoft Blog. “That’s why today we’re introducing a new site at microsoft.com/bythenumbers that uses a familiar interface … In the spirit of live tiles, we’ll update this site frequently, so you can keep apprised of the progress we’re making in our transition to a devices and services company, and of how many cans of Coke Zero we’re consuming each year (hint: it’s the most popular soda on our campus).”

So. Hm. Certainly there are some big numbers here. Looking just at the “important” ones I see…

These are all big numbers. The thing is, each can be followed by a “but…” statement. For example, Microsoft has sold over 100 million licenses to Windows 8. But… we know that dramatically fewer people actually use Windows 8, so many of those licenses were used to downgrade to Windows 7 or are sitting on unsold PCs.  And so on.

Microsoft’s need to remind people that it is big, that its products are in fact used by millions of people, is more interesting to me than the numbers themselves. Microsoft isn’t telling us how it’s irrelevant in the smart phone and tablet markets at the moment, for example. I mean, imagine numbers like:

1.4 billion. Amount in dollars that Microsoft spent marketing Windows 8 and Surface in fiscal 2013.

900 million. Amount in dollars Microsoft wrote off in the last quarter due to Surface RT inventory adjustments.

This are important numbers too. I’m not trying to be a jerk about it. It’s just that these and other negative facts must be presented as well to get a full picture of Microsoft by the numbers. Microsoft’s numbers are only part of the story.