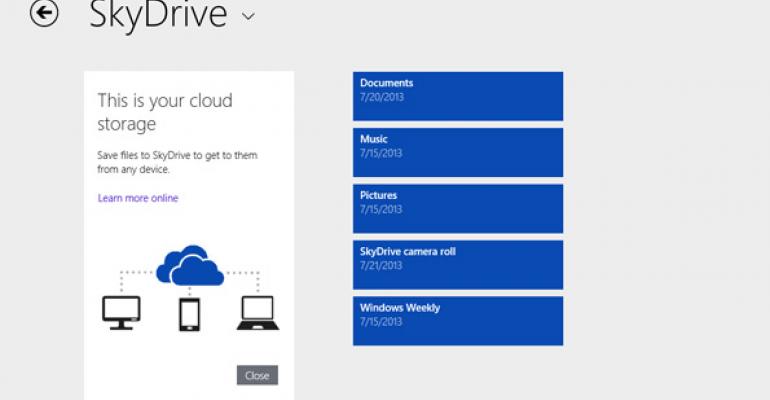 As noted previously, this is arguably the marquee new feature in this release

Microsoft has integrated SkyDrive more deeply into the core OS with the Windows 8.1 update for Windows 8 and RT. And this change means seamless connectivity to your cloud-based files from both the desktop and the new “Metro” mobile environment, meaning that the combination of Windows and SkyDrive is more powerful than ever, and more potent than what’s available on other platforms.

This wasn’t always the case. In the initial release of Windows 8/RT, SkyDrive integration basically meant online-only access to your files through a Metro-style app, as is available on platforms like Windows Phone, iOS (iPad, iPhone) and Android. (In addition to unrelated SkyDrive-based settings sync functionality that is unique to Windows 8/RT.) Windows 8 users (but not Windows RT users) could gain offline capabilities by installing the free SkyDrive desktop application.

But with Windows 8.1, Windows 8/RT are picking up additional SkyDrive integration.

I previously wrote two articles about the SkyDrive changes in Windows 8.1. The first, Hands-On with Windows 8.1: SkyDrive Integration, explains how SkyDrive is being more tightly linked the underlying OS, a huge benefit for all Windows users, but in particular for Windows RT users, given the original offline capability limitations. The second, Hands-On with Windows 8.1: SkyDrive App, discusses improvements to the Metro-style SkyDrive app, including new file system browsing capabilities.

I’m embarrassed to admit I missed a key new feature in that app (though in my defense I do tend to stick to the desktop environment): In Windows 8.1, you can make SkyDrive-based files available for offline use right from the app. You don’t have to do so from the desktop.

Placeholder files. When you agree to integrate SkyDrive with Windows 8/RT during Windows 8.1 Setup (or later, via PC Settings), you’re given “access to all your SkyDrive files without actually downloading them, using precious local disk space and Internet bandwidth.” This happens courtesy of a special, new kind of shortcut called placeholder files. They “look and feel like normal folders and files. You can tap or click a folder and see all the folders and files inside it. You can tap or click a file and it will open, you can edit it and close it. You can move, delete, copy, or rename placeholder files just like you would any folder or file. But [Windows] only downloads the full file when you access it.” The advantage? Huge space savings: 100 GB of used space in SkyDrive can take up less than 5 GB on the local disk, for example.

Smart thumbnails. Because of the special needs of photos, the placeholder for this type of file is a bit different. “When you flip through photos, [Windows] downloads large thumbnail images instead of the actual files. And [Windows] pre-fetches thumbnails to enable fast scrolling. It’s only when you want to edit a photo that [Windows] downloads the full file to the local disk.”

Offline access. I noted previously that you could right-click on SkyDrive-based files and folders from File Explorer and choose “Make available offline” from the pop-up menu that appears. But this works from the SkyDrive app too, so tablet users and others that wish to avoid the desktop never need to leave Metro to access this functionality.

Also, Windows “always marks files for offline access if you’ve opened or edited them on this device before. [Windows does] that because most people tend to open the same files they recently opened, but the files they open often vary across different devices – so [it] remembers those files and makes this unique to the device you’re using.” You can also choose to have your entire SkyDrive available for offline access, of course.

File open and save. SkyDrive is built into the Metro-based File Picker experience as well as File Open and File Save on the desktop side, so you will be able to access your SkyDrive-based files, and save to SkyDrive, from any Metro app or desktop application.

Search. SkyDrive is also built into the new Smart Search experience in Windows 8.1, and SkyDrive files show up in search results just like your local files.

All in all, some great functionality here, and while you can certainly access your SkyDrive data using other platforms, only Windows 8 and RT with the Windows 8.1 update provide this level of deep OS integration.