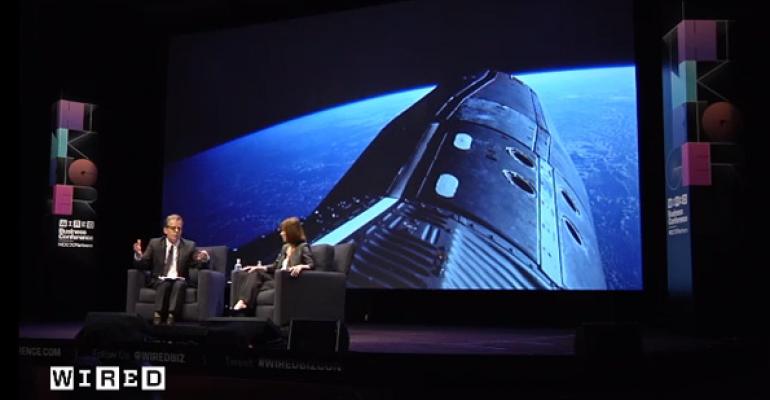 Julie Larson-Green Talks about “Blue” and the Future of Windows

Don’t worry, I pulled out all the interesting bits

Microsoft’s Julie Larson-Green made a rare public appearance this week to discuss Windows 8.1 “Blue” and her team’s attempts to win over disgruntled Windows users. Here’s a selection of the pertinent information from her Q&A with WIRED.

You can view the entire video—if you’re a masochist—on the WIRED Business Conference 2013 web site.

I don’t recommend doing that, however. I had originally set out to transcribe this entire Q&A, but it was just too painful. So what I’ve done instead is just bring you the pertinent bits, the little gems of information that petered out between the constant restatements about Windows 8 being a journey, and a ton of non-essential repetition from previous talks. Plus a lot of bloviating from the guy from WIRED.

That said, I do provide a couple of verbatim sentences that were just too delicious to ignore. Enjoy.

Windows users. WIRED stated there are about 1.4 billion Windows users in the world and JLG agreed.

Windows 8 is still a great desktop OS. “Windows does all the things it did before … Windows 8 is the best laptop, tablet, and desktop operating system.”

Windows 8 “haters”. “Whenever you make a change to Windows, there is always someone who has an opinion, either positive or negative. So we knew there was going to be controversy around some of the things that we did. Even in Windows 7, we made small changes to the Start menu and taskbar and we have heard a lot about those changes even though they were relatively minor. So we knew when we made a change as big as Windows 8 that we were going to hear a broad spectrum. In fact we had tested Windows 8 before we shipped for 1.2 billion user hours all over the world. And so I don’t think there’s anything I haven’t heard, before we shipped, since we shipped, and we’ve been following very closely, we get millions and millions of customer feedback every day, we read all the blogs, and there’s definitely a spectrum of, of … people. The more … we believe in people’s ability to learn and people’s ability to change. Sometimes it’s more of a problem for some people than others. We knew there would be a learning curve with Windows 8. We were prepared for that.”

Start button. “There are some challenges for some people who are very used to current versions of Windows 8 making the switch around mouse and keyboard users, so we’ll continue to respond and listen to the feedback that people have. Some of it is… just the comfort level that people have for the things they are used to doing … So the Start button, where you mouse down to the bottom left hand corner, it’s a very easy place to hit [with the mouse] and it comes up where the Start button has always been, and you can click it. But it’s hidden. So some people like the comfort of having it showing up on the screen all the time, so they just know their home place and where to go, and it’s something we’ve been thinking about.

Start button, Part Deux. WIRED later brings up the topic again and leads JLG with “is there meaningful discussion” about bringing it back? “There have been discussions … meaningful discussion. But we believe fully in the Start screen and the model of having these live tiles. The [old] Start menu was never really built for multiple applications … the Start screen offers dramatic improvement. Windows today is so much more than launching applications … the [old] Start menu is not the be-all, end-all. [But] the button might be helpful to have on the screen. We’re principled in the direction we’re heading, but we’re not going to be stubborn … It’s not to spite you.” [Laughs]

Windows Blue is … “the next update to Windows. And so I would say it’s really more about, um, continuous improvement, and the journey we’re on is one of continuous improvement, and we’ve made, you know [waves her hands like magician], 739 … fixes to Windows [8] since we shipped it, firmware updates, battery life improvements on Surface of over 20 percent from when you bought it in December, so we’re not just on the [chopping motion with hands] “big release” cadence, we’re constantly improving with major updates to the apps, major updates to the product … [drifts off, nods head].”

Blue is not a major release. “There aren’t major changes, some things are wildly inaccurately reported [flips her hand, fan-like, in the air], some things are wildly accurately reported [flips the hand again], so somewhere in the middle [again with the hands]. We’re working hard on … enabling new kinds of hardware and new kinds of software and doing some innovations in the product, continuing on the things we started AND responding to customer feedback.”

When will Blue ship? “[Blue] comes out at the end of the year. In fact, you can get your hands on it [at the] end of June … at our developer conference [BUILD].

How will the Blue public preview ship to users? It will be available to everyone who has Windows 8, in the Windows 8 Store, so you just click on it like you would any app, and it will update your system with all the latest … capabilities.

Why Windows 8 apps are different. Not standalone apps but a “web of apps that can talk to each other.”

Apps success. “We have more apps now in our store [after six months] than Apple had in its first full year [presumably of iPhone apps, but possibly of Mac apps, not clear].”

There are a lot of transforming hybrid PCs. JLG agreed.

Windows RT. “We have some work to do explaining it to people because it’s different.”

Has Bill Gates told the Windows team what he wants from Windows 8? “Bill is not involved in the day-to-day.”

Are you interested in being the next CEO of Microsoft? “Oh man.” [To be fair, this was an absolutely ludicrous question.] “I wouldn’t rule it out. I’m not in a hurry for anything like that. I’m new into my current role. Give me a year and then ask me again.”