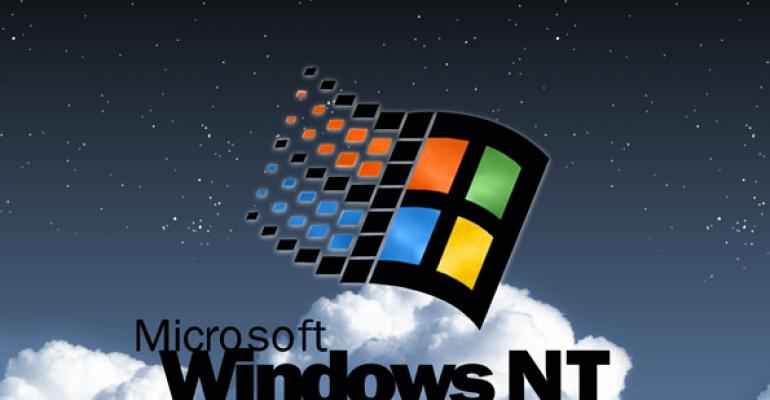 It’s Time to Bring Back NT

Windows NT meant something. It still can

If Microsoft is serious about fixing Windows 8 and preventing not just another Vista but a full-fledged revolt and exodus to other platforms, then it’s going to have to take some bold steps. And the first thing it should do is bring back NT.

Tech old-timers like myself fondly remember Windows NT and all it stood for. And they remember when the marketing group in Windows exorcised the NT brand, deciding that the Windows brand was both more important and more resonant with users. They were wrong on both counts. And while the resulting product, Windows 2000, with the redundant tagline “Built on NT technology,” was certainly solid enough for its day, it always left a sour taste in my mouth.

Times change, I get it. But when you examine the client versions of Windows NT you see a product that in its broad strokes has great relevance today in this new highly mobile computing world. NT was designed for workstations where Windows was for PCs. And it was aimed at power users, IT pros, and developers who preferred its power, stability, and reliability over the compatibility and relative performance of the shaky Windows 3.x/9x products of the day.

Today, Windows 8 is a hybrid OS that seeks to serve both tablets and other highly mobile devices as well as traditional PCs. But because Windows 8 includes both Metro and traditional desktop interfaces, it is optimized for neither, and is the opposite of Microsoft’s “no compromises” promise. The people who can’t stand Windows 8 are the same that used to gravitate to NT, power users, IT pros, and developers, and they would have happy-ecstatic, really—to give up the Fisher Price silliness of Metro for a desktop-only version of Windows 8 that is actually optimized for the hardware they really use.

It should be called Windows NT.

It’s time to bring back NT, both as a brand and a product, and to attach this name to a version of Windows where it will once again make sense. Windows 8/9/whatever can move forward to whatever tablet/hybrid/device future that Microsoft sees as the future of computing. And Windows NT can be the “truck,” the OS for those of us who really need to get work done.

Folks, this makes sense on more levels than you may realize.

Consider the needs of enterprises that are trying to blast remote desktops to thin clients or PCs over their internal infrastructure or the Internet. What system would be better for such clients? Windows NT would employ the Aero-less Windows 8 desktop and none of the frou-frou Metro touchiness that makes no sense in such environments.

Consider the typical business in which dozens to thousands of traditional PCs are already deployed. An upgrade to Windows NT would give them all of the security, reliability and performance benefits of Windows 8 with none of the Metro interfaces that would confuse users, require training, and be almost universally unsuitable for both those machines and for the work their users need to complete.

On and on it goes. And the reason the NT name is so important is that this name means something, and can still mean the same thing, just projected forward to a new generation of computing. Businesses would know that they can rely on NT and consumers could choose between NT and Windows, depending on their needs and their device/PC choices. NT could be installed on Windows computers and devices, and vice versa. Heck, you could treat the Metro stuff as an add-on even, much as Windows Server treats the desktop experience as an add-on today.

It’s time to bring back NT. This name, this brand, still means something. Something positive, something good. Something that’s necessary to remind customers that Microsoft hasn’t forgotten about the doers in its mad rush to satisfy the fat content consumers who only care about playing Wordament and checking Facebook with their fingers. This silliness needs to stop. And NT is the answer.