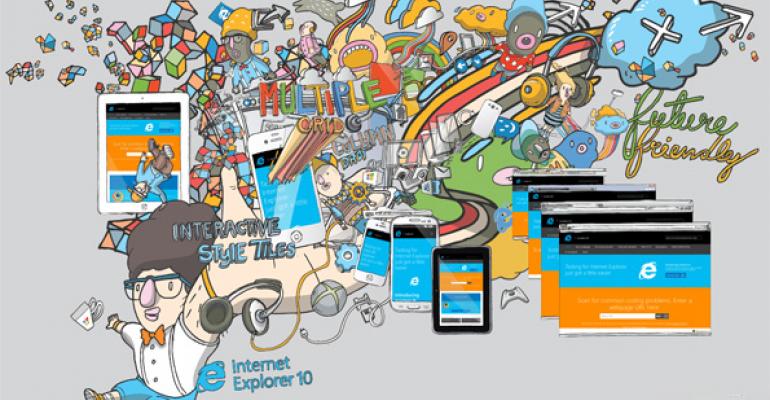 Yep, Microsoft is bringing IE 11 to over 400 million Windows 7 users too

While Microsoft is planning to deliver a surprisingly robust Internet Explorer 11 upgrade as part of the Windows 8.1 update for Windows 8 and RT this fall, many have been asking whether the firm plans to provide this release on Windows 7 as well. The answer is yes, and today Microsoft has provided a Developer Preview version of IE 11.

Aimed as it is at the web developer audience, much of the conversation today will understandably be around that side of the fence. But it’s worth noting, too, that IE 11 for Windows 7 will deliver much of the same functionality that we see today in IE 11 in the Windows 8.1 Preview. That means dramatically better performance, with 50 percent faster JavaScript performance than Chrome. It means better standards support, with native support for HTML 5 drag and drop, CSS border image, and more. It means WebGL support to enable some of the richest, almost native experiences ever seen in a browser.

I was able to test a new WebGL-based version of the amazing Glacierworks web site the other day using a touch-based Surface Pro system and IE 11 on Windows 8.1, and the results are amazing. This site should be updated with WebGL support by the time you read this.

Two features from IE 11 in Windows 8.1 are missing in the Windows 7 implementation, however.

The big one is cryptography and adaptive bitrate support, which enables such things as Netflix without a plug-in. This technology will ship in IE 11 for Windows 8.1, but not on Windows 7.

From a developer perspective, IE 11 for Windows 7 delivers the same advances you see in the Windows 8.1 Preview today. That includes a dramatically improved set of F12 developer tools that bring a Visual Studio-like level of debugging right into the browser. But one F12 developer tools feature called UI Responsiveness Tool is not available yet on Windows 7. I believe this will be added before the final release.

Concurrently, Microsoft is also improving the modern.ie web site, providing developers with a web-based portal for testing how their sites will work on different browsers and platforms. And for a limited time, Mac-based developers can obtain the Parallels virtualization solution for 25 percent off.

Developers interested in IE 11 for Windows 7 should check out IE11 Developer Preview for Windows 7: Enabling Next Generation Sites and Apps - Faster on the IE Blog.

You can download Internet Explorer 11 Developer Preview for Windows 7 from the Microsoft web site.