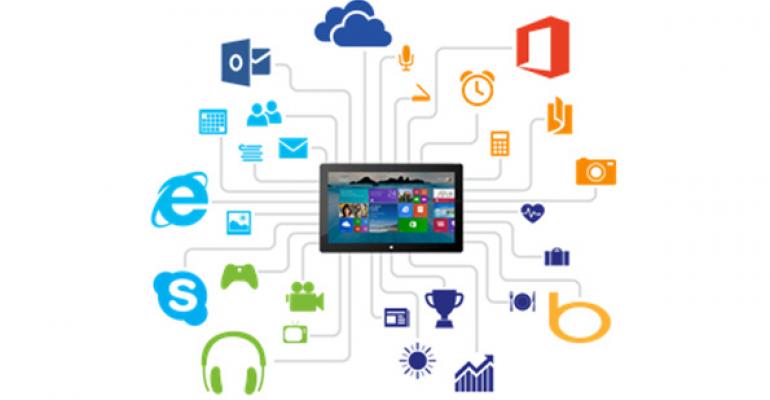 Included Right from (the) Start: Microsoft Explains its Windows 8.1 Apps and Services Strategy

With Windows 8.1, Microsoft is pursuing an apps and services bundling strategy that mimics the way Windows Phone works: Out of the box, this new OS version will include a full complement of useful apps and services integration, helping users get up and running immediately. But this strategy may seem familiar to long-time Windows desktop users, too: It’s basically what got Microsoft in trouble with antitrust regulators a decade ago.

Of course, times change. And while Windows absolutely still commands over 90 percent of the market for traditional PCs, it now competes directly or indirectly with new categories of devices that simply didn’t exist at the turn of the century: Tablet and smart phones. So while product bundling in Windows was a concern back in the days of the Clinton administration, today it’s no longer an issue. And as a result, Windows 8.1 users will benefit from the most “complete” Windows version Microsoft has ever released.

“Microsoft is focused on delivering one experience across all the devices in your life,” Microsoft Apps & Services general manager Ryan Gavin writes in a new post to the Windows Experience Blog. “The centerpiece of that strategy and experience are the Microsoft services and apps that come right from (the) Start on your new Windows device … This experience comes to life through more than 20 new and improved Microsoft apps and services that come as part of Windows 8.1, including a new one that we are announcing today – Skype.”

(Of course, you may already know that Skype will be bundled with Windows 8.1, as I wrote about that earlier this week in Windows 8.1: First Notes from Build 9471.)

“We have been building an expanding base of consumer apps and services,” Gavin notes. “Bing, Skype, Internet Explorer, SkyDrive, Outlook.com, Xbox Music, Video, and Games are just a few of the experiences that are now part of your new Windows device.  Each service itself is compelling, and the magic really happens when they smoothly flow together to create one experience.”

“We aspire for Windows to stand for the best set of consumer’s experiences on any device – the best music through Xbox Music, the best web through IE, the best cloud-storage with SkyDrive, the best mail with Outlook.com, the world’s most robust productivity suite in Office, and so on.  Below you’ll see an overview of apps and services that will be a core part of your new Windows device.”

Frankly, Microsoft’s bundling strategy makes sense, and as anyone who has used a Mac, Android handset or tablet, or iOS device (iPhone, iPad) can tell you, this is certainly what the competition is doing. Speaking of which, with Android hitting the 80 percent market share threshold, surely it’s time for the US Department of Justice to begin considering preventing Google from bundling its own apps and services in Android? Just a thought.