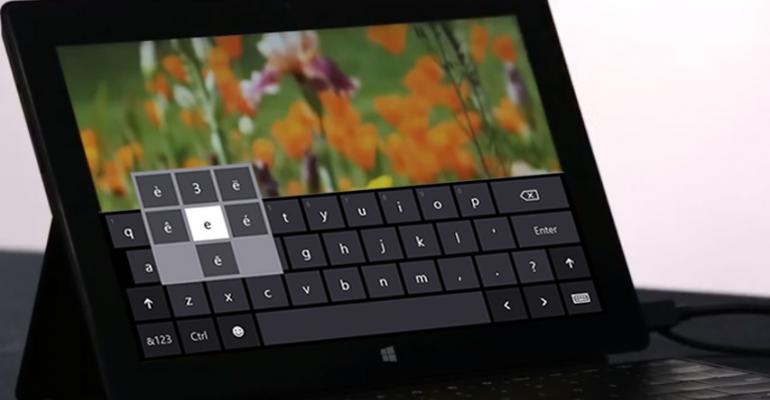 While most people using Windows 8 today do so using traditional, non-touch PCs, this system was of course designed a touch-first user experience aimed at a new generation of mobile computing devices, including tablets. In the Windows 8.1 update, one of the key components of this experience, the touch keyboard, has been improved even further to better support mini-tablets, portrait mode, and new swipe-based child keys.

Looking at the touch keyboard in portrait mode on the Acer Iconia W3, which is for now the only Windows-based mini-tablet on the market, a few things stand out. First, the keyboard offers a nice, usable layout, though even those with the biggest hands will need to use both of them. And second, there are now child keys being called out on that top row. So while you could also tap the &123 key to switch to the alternate keyboard, with symbols and other special characters, plus numbers, you can now also tap and hold on one of those keys to view the available child keys.

The nice thing about this approach is that you can swipe from the held key press to select a child key. When you tap and hold on “e” for example, 3 is available directly above the held key. So you just swipe up to “type” a 3. As Jensen Harris explained in a pre-Build briefing, this type of child key selection is simple and natural—and quick—and doesn’t require you to learn a totally new and weird new gesture keyboard.

Microsoft has also built suggestions as you type into the Windows 8/RT touch keyboard, though you need to manually enable this feature in the Windows 8.1 Preview. (Some apps, like IE 11, provide their own typing suggestions, of course.) It works as it does in Windows Phone 8, though the suggestions nicely appear where you’re typing, in a pop-up, and not attached to the keyboard as in Windows Phone.

In keeping with the new in-place swiping feature you get with child keys, you can even select suggestions with a gesture: Just swipe right or left on the virtual spacebar to move the selection. Nice!

Overall, some neat improvements. And since so many users will first encounter this touch keyboard with Windows 8.1, they’ll never know how much better it’s gotten since the initial release of Windows 8/RT.