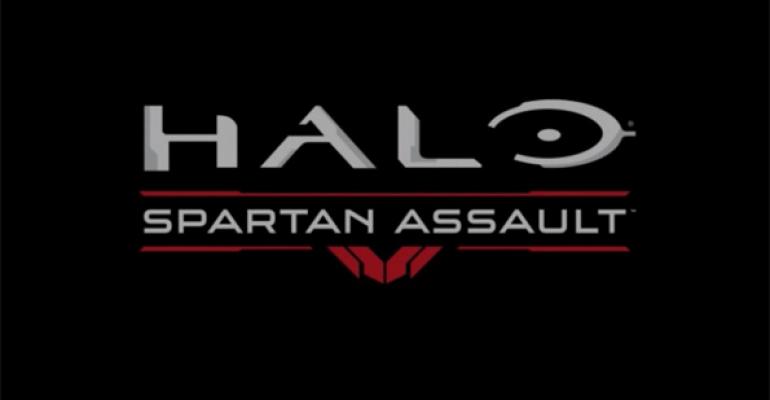 If you’ve played any shooter on a multi-touch device, you know the problem: The twitchy, fast-paced action of these games is almost impossible to play. So when Microsoft looked at bringing the colorful Halo universe to its own multi-touch platforms, it faced a choice. It could make yet another unplayable touch-based shooter. Or it could do something completely different.

Folks, Microsoft made the right choice.

If you’re familiar with the top-down view in such games as The Hive, Halo: Spartan Assault will look immediately familiar. But the similarity is literally skin-deep, as this new Halo title is in fact quite action-packed. And say what you will about Halo—I’ve grown quite tired of the console games—but it’s a ton of fun as well.

(On Windows 8 with mouse/keyboard controls)

Halo: Spartan Assault is available in separate versions for Windows Phone 8 and Windows 8/RT. The performance and presentation is beautiful on both, though I find the captions on Windows Phone to be completely unreadable. (What is that? 1 point type?) Even Surface RT acquits itself well here: Sure, the game takes an eternity to install. But in actual play, it’s flawless.

(On Windows 8 with mouse/keyboard controls)

From what I can see, the games are identical across the platforms. There’s a plot of sorts and Halo aficionados will thrill that the story line takes place in the time leading up to Halo 4. (These guys are almost as bad as Star Wars geeks.) Whatever. What you get is 25 action packed levels, of which I’ve currently only played a few. You get achievements, of course, since it’s an Xbox Live game and point whores will enjoy that the phone and Windows 8/RT versions have different sets of achievements.

The graphical treatment and music soundtrack are both excellent and almost hold their own against the console Halo titles. This is not a quickie attempt to capitalize on the blind love of Halo fans. Indeed, the care with which so many elements from Halo—guns, vehicles, enemy types and more—are faithfully translated to the touch screen suggests quite the opposite.

I had early access to the Windows Phone version of the game so I’ve spent more time there so far, but in installing the game on various Windows 8 and RT devices, I can say that the bigger the screen the better. Halo: Spartan Assault also supports mouse and keyboard for your Luddite PC owners, but I find the touch controls to be more natural (and simpler, with on-screen icons reminding you of what you can access). That in itself is pretty amazing.

(On Windows Phone 8 with touch controls)

(One crucial thing missing from this game, on Windows 8/RT, is Xbox game controller support. I have to think that’s coming.)

But no matter: For now, Halo has made the transition to multi-touch in fine form. And while this game is very expensive ($6.99 on each), its well worth it. Indeed, this may be the first Windows Phone 8 or Windows 8/RT game that justifies such a lofty price. There is nothing like this on either platform.

Note: According to "Microsoft, Halo: Spartan Assault is available worldwide except in the U.S., where Verizon Wireless customers get first dibs until August 16." That is of course inexcusable. Sorry for the omission. --Paul