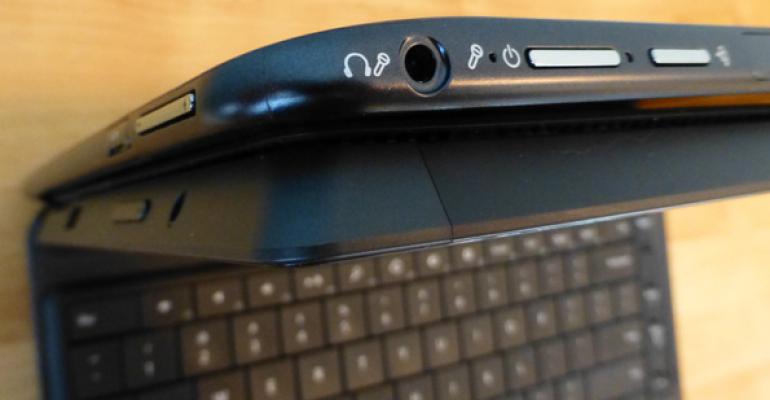 Going Pro: Thinking About the Competition

Do any Surface Pro competitors even come close?

For this 9th article in the “Going Pro” series, I’m going to take an unscheduled side-trip and quickly examine a key Surface Pro competitor. In the quickly evolving world of Windows 8 hybrids, is Surface Pro really the ideal choice?

It’s not an easy question. As I noted in my review of Surface with Windows 8 Pro, choosing the Microsoft entry is an interesting combination of the pragmatic and the emotional, the type of decision that makes the typical PC buyer a bit uncomfortable. With over 12 years of experience with Apple hardware, I do understand the emotional lure of Surface Pro, however. But there are other Windows 8 devices that don’t stir the heartstrings as much, or at all. And they speak to the more pragmatic side of the decision.

What touched this off—I had originally scheduled articles about pro applications and games for this point in the Going Pro series—is a recent review of one of Surface Pro’s competitors, the Samsung ATIV Smart PC Pro 700T. This one really has me wondering, and on a number of levels. This is a machine I have, and have written about, and I wasn’t particularly taken with it. But this review was written by Laptop Magazine, which I trust and recommend to others, and use in my own hardware evaluations.

It’s notable, I think, that Laptop Magazine rated the 700T at 4 out of 5 stars. Off the top of my head, I’d have given the device a 3 out of 5 stars rating, and as you can see in my own article about this very machine, A Tale of Two Hybrid Windows Devices: Clover Trail vs. Ivy Bridge, I wasn’t particularly impressed by it in any way: “Pretty good. Not ideal, but decent,” I wrote.

(For comparison purposes, Laptop Magazine gave Surface Pro a woeful 2.5 stars out of 5 in their review of that device.)

But the 700T is very interesting because it’s so close, spec-wise, to Surface. Roughly the same processor, same resolution screen, same Intel HD 4000 graphics, same SSD storage. It’s also different in interesting ways. The 700T is bigger, with an 11.6-inch screen, and a lot more plasticky. It’s keyboard add-on is more traditional than the Surface Pro’s Type Cover, and while it adds some heft of its own (and has no additional battery), it does also add a couple of extra USB ports. The keyboard itself, while not excellent, is also more spacious and more like a traditional Ultrabook keyboard, than that of the Surface Pro’s Type Cover.

Let’s step through a few of the “Pros” that Laptop Magazine ascribes to the 700T and see where these items fall with Surface Pro.

Powerful performance. Outfitted with a 1.7-GHz Intel Core i5-3317U CPU, 4GB of RAM and a 128GB SSD, the 700T is a real PC and performs accordingly. But these specs are also identical to those of the Surface Pro. So this is a toss-up.

Compelling Samsung apps. While I find Samsung’s Windows apps to be useless and perhaps borderline “crime against humanity,” Laptop Magazine felt quite a bit differently, perhaps because some of these apps provide “seamless integration” with similar apps on other Samsung devices like the Note 2. Looking at these apps again with Laptop Magazine’s recommendations ringing in my ears, I see no reason to retreat from my earlier stance. These apps aren’t just bad, they should be uninstalled immediately.

Sharp 1080p display. The 700T features an 11.6-inch display running at 1920 x 1080, which Laptop Magazine was quite happy with. I find the extra inch—the Surface Pro features a 10.6-inch 1920 x 1080 display with roughly identical brightness to that of the 700T—to be pretty much a wash, and as I wrote in Going Pro: Thinking About the Surface Screens and in my original Surface Pro review, that high of a resolution is both good and bad on such tiny screens. Put simply, the PC nature of these devices means you will be spending time in the desktop environment, and that environment is not well-suited for the devices’ strange combination of small physical size and high resolution. Does the bigger 700T make a difference? Very little to my eyes, though I do prefer the bigger screen overall.

Fast boot time. Both the 700T and Surface Pro benefit from the combination of Windows 8 Pro and SSD storage and boot in seconds. And both devices don’t typically need to be booted at all. So this is a wash.

Keyboard included. Laptop Magazine likes that the 700T comes with the keyboard base/dock, which I agree with. That said, that you can get a choice with Surface Pro is perhaps superior, and I suspect that future (and perhaps better) keyboard connections for Surface Pro will further moot this argument. More to the point, however, the 700T damn well better come with a keyboard, since you’re paying for it: According to Laptop Magazine, this device costs $1200. A comparable Surface Pro with Type Cover costs $1130, about $70 less. (And it doesn’t come with any crapware, unlike the 700T.)

Dock for stylus. Unlike Surface Pro, the 700T stylus, the S-Pen, can be “docked” inside the tablet itself, as we used to do with Tablet PCs back in the day. The Surface Pen, meanwhile, is loose, and will be lost. Fair enough. But the Surface Pen is also vastly superior to the 700T’s S-Pen, with a longer, more pen-like barrel that will be more at home in adult hands than the tiny S-Pen. It also features over 1000 levels of pressure sensitivity, compared to just 128 for S-Pen. Both feature palm rejection. I don’t really care about this feature personally, but it’s a big deal for some people.

Of course, Laptop Magazine dinged the 700T for a few issues as well. The key ones are:

Relatively heavy. The 700T with keyboard base weighs 3.6 pounds, which is significantly heavier than the Surface Pro with Type Cover, which weighs in at 2.5 pounds. What’s interesting here is that the Type Cover weighs only .55 pounds, compared to 1.6 pounds for the 700T keyboard base. That’s a big difference. (With the expected trade-offs to either approach.) Anyway, the 700T is a pound heavier if you’re carrying on.

Inconsistent touchpad. If there’s one thing that’s consistent about all the Windows 8 device trackpads I’ve tested, it’s that they all suck and that I routinely and inadvertently trigger multi-touch gestures while typing ... Except on Surface Pro and Type Cover. Go figure, but that’s actually because the Surface Pro trackpad is both smaller and less capable than the trackpads on other devices, and it does not support the Windows 8 app-switch gestures you see elsewhere. I prefer it this way and do everything I can (via the Mouse Control Panel) to de-tune the capabilities of other trackpads, including that on the 700T. Which is indeed abysmal.

Pricier than many Ultrabooks. $1200 is a lot of money for what I think is an inelegant machine that is made of cheap plastic. The Surface Pro, meanwhile, is smaller (not necessarily good) and lighter, but made of much higher quality materials. So you can at least justify its price with the quality argument. I’m just not impressed by the 700T in any way.

Before moving on, however, I would like to point out a few very important differences between the 700T and Surface Pro that Laptop Magazine covered but didn’t highlight in its Pro/Con lists.

Battery life. If there is one area where Surface Pro is fairly criticized, it’s battery life. I’ve been monitoring this very closely since I got the device, and the 4.5 to 5.5 hour range I first reported has been consistent. This is well below the “category average” of 7 hours and 10 minutes that Laptop Magazine reports. But the 700T hits at 6 hours and 38 minutes of battery life. That’s well above the results for Surface Pro, and I suspect a lot of that has to do with the fact that the device is simply bigger and can accommodate a bigger battery. This fact alone should make some potential Surface Pro buyers think twice about their choice. Depending on your needs, this could be the deciding factor.

Size. The more I use Surface Pro, the more I struggle with the physical dimensions of the device. While this may never be an issue for you, I’m a big guy and I’ve grown quite comfortable to the Samsung Series 9 15-inch Ultrabook I take on the road. This device has a big keyboard and a gorgeous, big screen that runs at a comfortable 1600 x 900 resolution. I love it. The Surface Pro feels cramped by comparison. So does the 700T, though maybe not as much. If the Surface Pro feels just a bit too small to you, you might consider a 700T or other 11.6-inch (or larger device.) You really should try to get some hands-on time with Surface Pro before pulling the trigger on that purchase. (This is true of the 700T and other Windows 8 devices, too, of course.)

Ultimately, once you’ve eliminated the Surface Pro issues I’ve raised—the size, screen/resolution, and the battery life being key—as being serious enough to eliminate this device from contention, I find it hard to believe anyone would chose a Samsung ATIV Smart PC Pro 700T over a Surface Pro. The devices are ostensibly competitors—hybrid Windows 8 Pro devices that can be used as both Ultrabooks and tablets—but the Surface Pro wins big on design, quality, and even price. And with more keyboard/battery attachments expected for Surface Pro in the future, it’s possible that the gap could widen even further.

But that’s the thing. I don’t believe this comes down to specs. When people see these devices side-by-side—which you can do by visiting a Microsoft Store, if such a thing exists near you—most would agree, I think, that the Surface Pro is simply the better device. It’s like comparing a BMW coupe to a Honda Civic. Both are decent enough. But there’s just something about the luxury car. In this case, however, the Surface even costs less. It’s that emotion and pragmatism thing again. You can make a pragmatic case for either device. But you only the Surface Pro triggers an emotional response.

I really do think that matters.