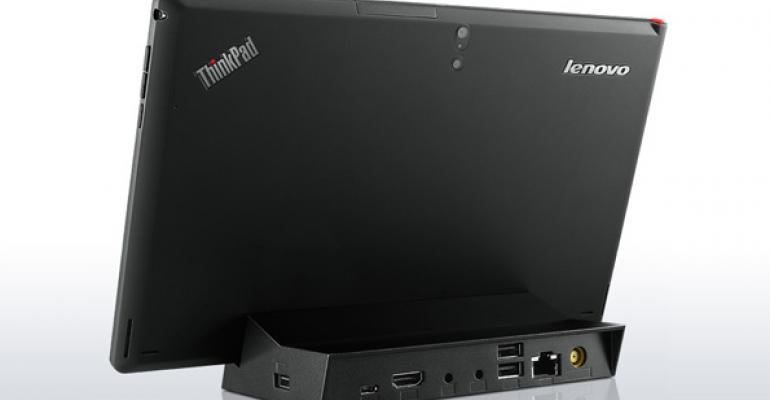 The Final Piece of the Hybrid PC Puzzle

Hybrid mobile PCs are great, but they leave desktop use out of the equation

With Windows 8, Microsoft and the PC world are ushering in a new age of hybrid mobile PCs and devices, where the screen contains the “guts” of the system and can be used as a standalone tablet or plugged into a keyboard base for a laptop-like experience. These diverse devices are the future of mobile computing, no doubt about it. But there’s a missing piece to this puzzle, one that I think will put these designs over the top.

I’m speaking, of course, about the lowly dock. Or port replicator. Whatever you want to call it, what’s needed is a way to bridge the gap between stationary computing at a desk or workstation and truly mobile computing, on the go.

This is an area where Microsoft should innovate. It’s Surface RT and Surface Pro devices both feature what’s called a “cover port”; this is where the Type Cover and Touch Cover connect to the devices, making that satisfying and high-quality “click” sound. But this port can and should also be used to connect a dock, so that you can more easily use the device with desktop components like a large screen and external keyboard, mouse, and web cam.

Today, the situation with these devices in particular is lacking. Both contain only a single USB port (USB 2.0 on the Surface RT and USB 3.0 on Surface Pro), and their awkward location makes connecting third party port replicator solutions—a true dock is impossible thanks to the current design—less than ideal because you need to connect a second cable for video. (Further complicating matters: The Surface RT and Surface Pro use different video-out solutions.)

While this device is dated, I’ve been testing a USB 2.0-based Lenovo ThinkPad port replicator with various Windows 8 machines. I can’t get video out to work, necessitating the second cable, and while I’m interested in buying the newer USB 3.0 version, my lack of success with video makes me less likely to even bother trying.

Better than plugging in one or two cables, of course, is just having a true dock solution. The BUILD developer tablet, a prototype Samsung Series 7, includes such a dock, and while I originally found it lacking, it’s a huge improvement over using a port replicator because off its plug and play (literally) functionality. It features only a single USB port, but you can add a USB hub for more devices, and they can all be permanently connected. Only the tablet would come and go. Ideal.

I suspect the Surface cover port make a dock difficult, because users would need to keep disconnecting their Type/Touch Cover and then remember to bring them when they were on the go. But I’d still like to see such a thing happen. It would put Surface—or whatever device does implement such a design—over the top.

You can do this, Microsoft. One PC that does it all.