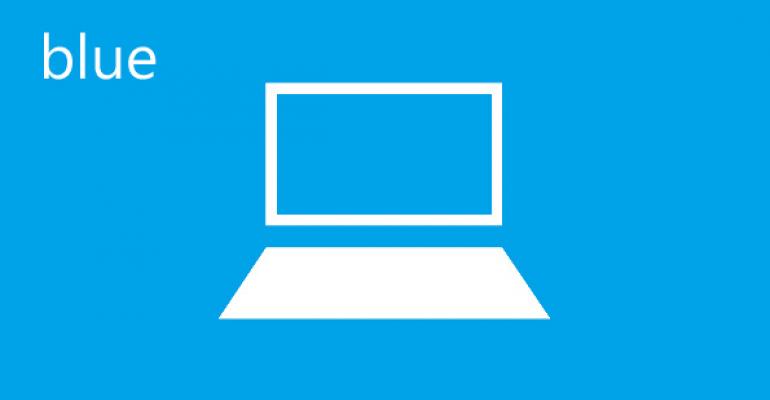 Why is Microsoft working on a major update to Windows 8 when so many small things need to be fixed first, and faster?

Folks, we’re on the precipice, that inflection point that will determine whether the future of mainstream computing involves PCs in a major way or only a very minor (perhaps solely and boringly work-oriented) way. And Microsoft, God help them, is getting it wrong. Again.

The background: Realizing that the computing world was changing rapidly, Microsoft designed Windows 8 to be a hybrid OS, one that included both updates to its now-traditional desktop interface and one that include a brand new mobile OS, which I call Metro, that is optimized for a new generation of touch devices that may or may not ever be a hit with users.

Microsoft being Microsoft, they simply can’t help being all things to all people. So what you get are strange interactions—a vestigial desktop on touch-based tablets running Windows RT, or ginormous buttons that would be perfect for ogre-sized fingers on large desktop displays—as well as weird new hybrid computers that bend around in unusual ways or have snap-off screens. The clarity of this vision of the future of computing is more than slightly offset by the fact that, with Windows 8, both the hardware and the software are huge compromises, things that are not ideal for any one usage scenario.

More problematic, Windows 8 is a work-in-progress. The system that was released in October 2012 is only partway towards Microsoft vision of the future, and it’s reasonable to think that we’ll be looking to Windows 9 or even Windows 10 to fully realize this massive sea change. I give Microsoft credit for taking this huge risk, I really do. And as a tech enthusiast I almost revel in the weirdness of Windows 8. But there’s a serious downside to this situation. And that’s that Microsoft is stuck selling this half-finished system now to users who, quite frankly, don’t understand what they’re getting.

We’ve been over all this before, of course. But recent developments suggest that Microsoft hasn’t taken very obvious and logical advice to fix Windows 8 (and related half-finished systems like Windows Phone 8 and the online Windows Services like Outlook.com) on an ongoing basis. Instead, they’re just doing what they’ve always done: Methodically prepare, test, and then release a big-bang, monolithic update. The only difference is that they’re doing it in one year instead of three and that, presumably, this release will simply be slightly-scaled-back from a size and impact perspective as a result.

According to a report in win8china, which has once again become the canary in the coal mine for all things Windows, Microsoft has now begin developing something called the Blue Milestone Preview (or MP). Where Windows 8 had three pre-release milestones, Blue will have one, since, you know, it’s going to take one year, not three, to make. This Preview will let users check out the changes early and (try not to laugh) provide feedback that may or may not change things. Blue MP follows the so-called M1 (“milestone 1”) release of the system—I guess we’re just talking about Windows 8 Blue here---and supposedly included an upgrade of the kernel to version 6.3 … for some reason.

If true, this is stupid.

Fixing Windows 8 for the long term is easy. So easy, in fact, that even I was able to churn out several articles full of logical advice about doing so. And while some of these things could wait for “Blue,” that coming release/update of Windows 8 (and Windows Phone 8, Server 2012, and the online services) that will ship throughout late 2013 and beyond, most of them need to happen much more quickly than that. So rather than applaud Microsoft for doing less more quickly, I’d like to prod them to do much less much more quickly, and on an ongoing basis. Again. I’ve been beating this drum since last year.

Fixing Windows 8 for the short term is likewise easy and it doesn’t require the enormous machinations of the Windows team to wind itself up into an all-too-familiar (if faster) release cycle, like a ponderous, high-tech version of getting the prog-rock band “Yes” to go on tour with its original lineup. It just requires releasing little fixes, regularly. Monthly. All the time.

It requires fixing those horrible, terribly incomplete Metro apps one by one. Add a unified inbox view to the Mail app. Fix Xbox Music and get the matching service up and running. Add CalDAV support to Calendar. And so on. None of these things are created by the Windows team, so they can just happen over time, on an accelerated schedule, one feature in one app at a time. Why isn’t this already happening?

Release an update that lets us skip the Start screen and boot right to the desktop and then make that a formal PC Settings option in Windows 9. Have someone create a Facebook for crissakes. Fix the damn thing.

To be clear, if Microsoft is serious about competing with the likes of Google and Apple for the hearts and minds of customers, those people who will buy the smart phones, tablets, and possibly the hybrid PCs of the future, it can’t keep doing things the old way. Slightly faster is not fast enough. And slightly smaller is not small enough.