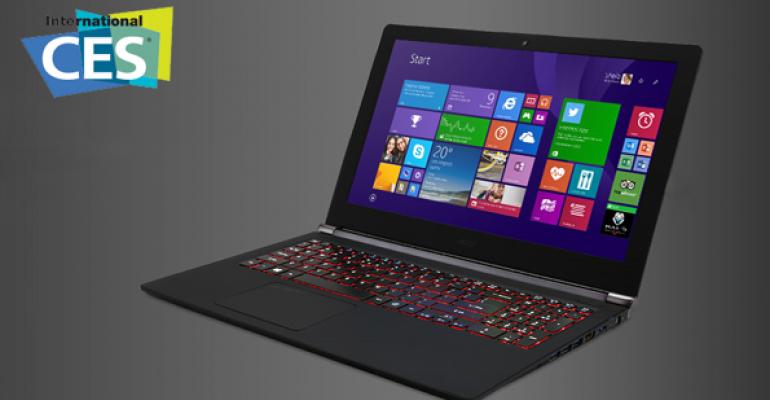 Some of the best-looking Windows devices just got better

It's going to be a busy week of CES 2015 news, so let's get it started with the first relevant pre-show announcement: Acer this weekend announced upgrades to its Ultrabooks, convertible notebooks and 2-in-1 mobile PCs that will see expanded availability of 2015-era Intel Core processors and faster 802.11ac wireless capabilities. And the firm's gaming laptop lineup was also upgraded with the Intel RealSense 3D camera.

Aspire R 13 Series. Acer's convertible notebook line features a 13.3-inch screen and an Ezel Aero Hinge for 180 degrees of screen rotation and six usage modes. For 2015, they are picking up 5th generation Intel Core processors and 802.11ac wireless, up to 1 TB of SSD storage, up to 8 GB of RAM, 10 hours of battery life and two screen resolution WQHD (2560 x 1440) or Full HD (1920 x 1080), both with Zero Air Gap Technology and Gorilla Glass 3. Intriguingly, both versions can be used with an optional Acer Active Pen "for drawing, creating and collaborating" as well. The new R 13 Series will ship in January, Acer says, with pricing and availability dependent on locale.

Aspire S7 Ultrabook. Acer's superior Ultrabook line is getting refreshed with 5th generation Intel Core processors and 802.11ac wireless, and will retain its svelte--.51 inches thin and 2.87 pound weight—form factor. All models include 8 GB of RAM, 128 GB or 256 GB SSD drives in RAID 0, and Intel Wireless Display (WiDi) technology. Available screens resolutions are WQHD (2560 x 1440) or Full HD (1920 x 1080), and the touch screen tilts back a full 180 degrees so you can use it flat on a table or similar surface. The new S7 ships in January, again with variable pricing and availability.

Aspire Switch 12. Acer's upgraded 2-in-1 is really a "5-in-1" with five modes of operation, but the big news for 2015 is the changeover to Intel's new Intel Core M processor. It features a 12.5-inch Full HD (1920 x 1080) touch screen with IPS technology and Zero Air Gap technology, 2x2 wireless antenna technology with multi-input/multi-output (MIMO), and microUSB 3.0 and microHDMI. The screen is detachable so it can be used like a tablet, and the keyboard base features a magnetic and latch-less design with an integrated pointing stick. You can also use an optional Acer Active Pen with the Switch 12. This new device will ship in "early 2015" in the US and Canada, Acer says.