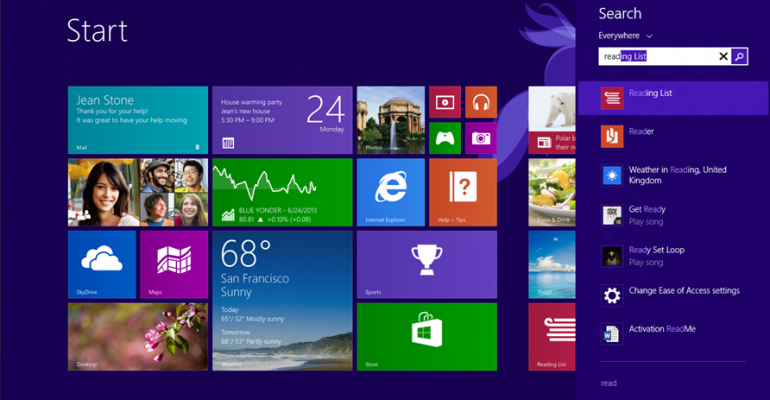 In Blue: Bing Integration is the Marquee New Feature

Forget the Start button and boot to desktop sideshows in Blue: This is the big stuff

Where iOS has Siri and Android has Google Now, Windows 8.1 will have a punched-up, Bing enhanced new Search functionality. It’s a curiously major feature that is almost lost among Windows 8.1’s treasure trove of small but important updates. The question is whether this will catapult Windows Search into the big leagues or whether this is just another Clippy in the making.

I’ll reserve judgment on this feature until I can use a working version. The several leaked builds we’ve seen so far—both public and private—had enough of this code to reveal that the deeper Bing integration was coming, but I have to assume it was incomplete as it didn’t really work at all.

But we’re just weeks away from the public release of the Windows 8.1 Milestone Preview (MP) build, an all-in-one release that replaces the Developer Preview, Consumer Preview, and Release Preview milestone trifecta from previous, and longer-running Windows betas. (And much less time away from getting it otherwise.) So for now let’s focus on how Microsoft is communicating this change.

In a post to the Bing Blog, Microsoft this week said that the integration of Bing Search into Windows 8.1 follows in the footsteps of other Bing platform integration in Xbox, Windows Phone, and Office (and Windows 8, actually, which of course comes with a standalone Bing app as well as a suite of related apps made by the Bing team).

“One of the big investment areas in the Windows 8.1 release is a new way to think about search in Windows,” Microsoft corporate vice president Derrick Connell writes. “We’ve been working hard with the Windows team to reimagine what search can and should mean in the Windows experience. With search in Windows 8.1 our intent is to have one way to find what you’re looking for, no matter where it lives – whether it’s a document on your PC, a photo album in the cloud, an app, PC setting or a website. In just a tap or a click you can play, view, launch, or browse.”

If you’ve been following Microsoft for a long time, you may recognize the potential danger in this approach. The devices and services firm has been trying to out-think its users for decades and intelligently understand what they’re doing and then provide them with in-context help, some of which has gone infamously awry. I’m thinking of course of Clippy, and his attempts at helping you write what wasn’t, but appeared to be, a letter. But there are many examples.

The fear with Bing Search in Windows 8.1 is that it will provide non-useful web results when you’re just trying to find a file. You can sort of imagine how bad this could get, with Siri-like mocking videos just seconds away from hitting YouTube.

On the good news front, a similar integration works pretty well in Windows Phone (excluding for a moment the fact that the hardware Search button in Windows Phone is inadvertently triggered far more than it is purposefully triggered). You press the Search button to access the Bing Search experience, type a search query, and Bing returns results that make sense for a phone, with web, local, media (audio and video) and shopping results segregated into groups. The intelligent bit comes when Bing Search tries to present the right group based on context. Search for Microsoft, for example, and you get Web results. Search for Whole Foods (a supermarket chain) and Local results come up by default.

Having used Windows Phone (and thus Bing Search on Windows Phone) more than most, I look to Bing Search in Windows 8.1 and wonder how that kind of functionality could be melded to the PC/device/tablet UI and make sense.

Here’s how Microsoft describes it.

First, in lieu of a Search button, Windows 8/RT already provides a system-level Search charm. The Search experience triggered by this charm is context-sensitive. So if you invoke it from the Start screen, it searches for app and provides options for finding settings and files too. But you can also recast the search to any Metro apps that are compatible with the Search charm. And when you invoke the Search charm from within an app, it defaults to that app. In the Mail app, when you invoke Search, you will be searching your email by default.

Need to know more? Check out my article Windows 8 Tip: Find Anything with Search.

In Windows 8.1, Search is changing.

“People told us they liked the ease of having fewer places to search,” Connell notes. “With the new Windows 8.1 Search experience, you can find your own personal stuff as well as content from the open web and the creativity of the millions of authors and developers. Modern search needs to be complete and help you find what you’re looking for, whether it’s on your PC, in your top apps, or on the web.”

Put simply, Microsoft is comingling Web search—what used to be part of the Bing standalone app—with system-level Search and presenting those results in-line rather than requiring you to think Bing and tap on that app icon in the Search experience to see web results. I admit this makes me nervous.

Microsoft appears to be making an effort to avoid a Google-style display of millions of search results, most of them worthless, and will instead be seeking to intelligently answer your query. And this, folks, is why I compared this change to Siri and Google Now upfront.

“Modern Search needs to be finely crafted and well-organized so that you can not only find what you’re looking for, but you can find it quickly,” he continues. “Modern Search is fast and fluid. So we’ve designed an entirely modern Search experience specifically for Windows that will begin to unify your online and offline worlds, so you can interact more naturally with the tools you use and the things you create.”

The post then presents this crazy panoramic display as if this clears things up in any way. (Presumably someone has just searched for Marilynn Monroe.)

This one makes a bit more sense. A search for Waikiki returns personal photos as well web results.

The underlying point to this integration, I think, is to remove the notion of Search as a standalone thing. Instead, Search is just something that’s there if you need it. (There are some small steps towards this in Windows 8 and the spring 2013 app updates, where you can just start typing in the Start screen or an app to trigger a search.)

“So from the Start screen in Windows 8.1, you can just start typing what you want,” Connell explains. “A city. An artist. The name of your cat – it doesn’t matter. As you type, you will see suggestions about what you might be looking for and a quick tap on any of the suggestions will expose you to a whole new way to use Windows. Regardless of where something lives and what it is – a document on your PC, your photo album in the cloud, an app, a website, a program – with just a tap, you can play, view, launch, browse, and more. Modern Search isn’t just about finding information. It’s about using your PC to do the things you love.”

Windows 8.1 Search seeks to put an end to traditional Search and bring us closer to a future in which our computing devices can simply give use the information we want, in-context, and in effect provide us with an answer to a question. Again, this is exactly the point of Apple’s Siri, which uses voice interactions for friendliness, and Google Now, which seeks to (in a very Microsoft way) out-think what you’re doing by predicting what you will need before you even realize you need it. This functionality is clearly Microsoft’s answer to Siri and Google Now, and I expect to see this level of Bing integration happen in other Microsoft platforms going forward as well.

“Imagine you’re planning a trip to Paris,” he writes. “Simply type the name of the city and you’ll immediately see beautiful, full-bleed images, upcoming events in the city, and popular attractions. But you can also check the current weather and book a hotel in the Bing Travel app, without having to open it up and type “Paris” again. In the same way, your itinerary and budget, whether they are saved on your laptop or in the cloud, are right there. And of course, we’ll show you the great Web results you’ve come to expect from Bing. ‘Paris’ isn’t just a single file or a search query in an app: it is a concept, full of both meaning and context, and we’ll bring its unique meaning to your digital life, all in one place.”

If this works as advertised, this could very well be the marquee feature of Windows 8.1. If it fails, if it’s another Clippy, it could make Microsoft appear to be well behind its rivals in what I think is a critical new area of functionality for any mobile device platform.