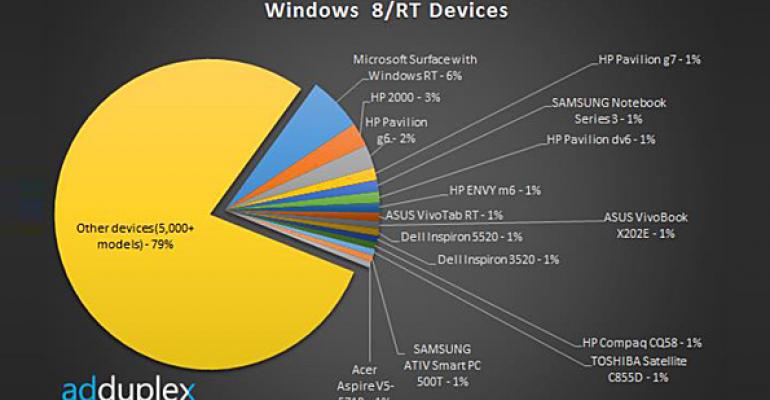 Surface is still the most frequently used Windows 8 device

Note: This post originally used the word "sales" instead of "usage," which is what AdDuplex measures. I've made the necessary fixes to correct that. --Paul

A new report from AdDuplex says that Microsoft’s Surface with Windows RT continues to be the most often used Windows 8 device about a month and a half after launch. However, Surface has a far less commanding lead than it did a month ago.

Note: Surface with Windows RT obviously runs Windows RT, which is a version of Windows 8.

AdDuplex generated a lot of news when it claimed a month ago that Surface was, by far, the most often used Windows 8 device. At the time, Surface was responsible for 11 percent of Windows 8 device usage, with its closest competitors obtaining just 2 percent or less of this nascent market.

This week, AdDuplex will release a new report showing how usage has shifted.

Surface is still number one. With 6 percent of all Windows 8 device usage, Surface is still the most often used of these device types. But as AdDuplex notes, “its lead is not as stunning as it was last month”: Surface is down a full 5 percentage points and my guess is that it will fall further until the Surface Pro unit is available in very late January.

Some competitors are gaining ground. A few other devices are starting to pick up usage, though the most often used non-Surface devices look like traditional PCs: The HP 2000 (3 percent of sales) and HP Pavillion g6 (2 percent) are both over the 1 percent threshold.

Most devices don’t sell very well at all. The vast majority of surveyed machines, or 79 percent, fall into the “Other devices” category. This category contains an astonishing 5,000+ device types.

More devices have come to market. When AdDuplex surveyed Windows 8 devices a month ago, there were a bit over 3,000 different device types in market. Today, there are over 5,500.

Top device makers. The top five Windows 8 device makers by usage are HP (22 percent), Dell (10 percent), Acer and ASUS (9 percent each), Toshiba (7 percent) and … wait for it … Microsoft (6 percent). So Microsoft is outselling Lenovo (which is amazing), Samsung, and Sony.