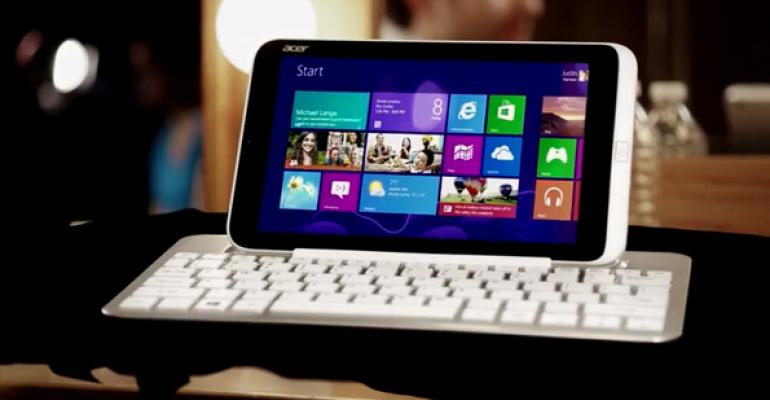 As the world’s first Windows mini-tablet, the Acer Iconia W3 is interesting, and a peek at the future. But its infuriatingly poor screen and surprising heft relegate this device to also-ran status.

OK, I wrote that I probably wouldn’t be reviewing this device in my Acer Iconia W3 First Impressions and Photos. And I’ll ruin the surprise upfront by stating that I still can’t recommend the W3, generally speaking. But like many of you, I’m intrigued by the promise of Windows mini-tablets. And every time I see this machine I ponder what could have been.

Indeed, unbeknownst to you, but beknownst to me—that one was for you, Princess Bride fans—I’ve been using the Iconia W3 as much as possible lately, most recently to write the post Surface Tip: A Mini Bag for a Mini PC from a coffee shop in Dedham Square. What kills me about the device is that it delivers something I’ve always thought was a good idea: A small screen with a full-sized keyboard. (Though to be fair, I imagined the screen being sort of a half-height thing that extended the width of the keyboard. Close enough.)

From a specs standpoint, the Acer W3 reads like a typical Atom-based Windows tablet. It has a 1.5/1.8 GHz Atom “Clover Trail” processor, 2 GB of RAM, and 32 GB ($379) or 64 GB ($429) of internal storage depending on model. And optional keyboard dock can be had for about $79. It ships with a 32-bit version of Windows 8 Core (not Pro) and a complete version of Office 2013 Home & Student, which includes Word, Excel, PowerPoint and OneNote. There are various Acer utilities included, none of which I’ve evaluated.

OK, so what did Acer get right?

Thanks to its “Clover Trail” architecture, the W3 delivers killer (and ARM-like) battery life of between 8 and 9 hours in my informal tests. The performance, while not stellar, is still better than that of Surface RT. I use Word regularly on the device with a few browser windows open, and have tested HD video playback, and performance is absolutely serviceable. Halo: Spartan Assault plays without any stutters, though to be fair, it does so on Surface RT as well.

Of course, the W3 also works with standard desktop applications, unlike ARM/Surface RT, and offers full compatibility with hardware peripherals. This means you can install such things as Apple iTunes, Google Chrome, Adobe Reader and Windows Essentials, not to mention full driver sets for a Microsoft mouse or whatever printer, scanner, and other peripherals you may wish to use.

Before I get too ahead of myself praising the W3, however, it’s worth remembering that the negatives do outweigh the positives.

These negatives start with the screen, which is an 8.1-inch panel running at a surprisingly acceptable 1280 x 800. I noted in that First Impressions post that the screen appears to have a “coating that gives the display a sort of mottled look that I associate with cheap devices of days gone by.” TWiT’s Iyaz Akhtar noted to me that it reminded him of the displays we saw in the generation Tablets PCs from way back in 2002-2003, and he’s right: That’s what this screen effect reminded me as well. What it is, simply, is cheap: The mottled effect is basically the glue that binds the touch-sensor to the screen. It’s horrible to look at, and gets worse if you’re not looking directly at the screen from the proper angle. The screen will make this device a non-starter for many people. Try it in a store before you buy.

The second major issue is that the W3 is surprisingly thick and heavy for a device this size. I realize the Windows community is feeling a bit sensitive about the iPad right now, but come on. In the same way that the Surface RT and Pro are (if beautiful looking) much thicker and heavier than an iPad, the W3 is much, much thicker and heavier than an iPad mini. And from a pure quality perspective, the W3 is cheap plastic while the iPad mini exudes quality. These are not comparable devices, not really.

There are other nits, none major.

The performance, while better than that of ARM, is still not great. Push the machine beyond a few simple applications and you will feel the slowdown. The Atom processor that drives the W3 is last year’s model and can only handle 2 GB of RAM (like ARM). You can’t do a lot at once, and you certainly won’t want to try using Visual Studio or Photoshop (though of course both will install and work, albeit slowly).

The expansion options are pathetic. The W3 ships with a micro-SD port, and I have outfitted mine with a 32 GB module, which I’m using for media (courtesy of the new Windows 8.1 Preview settings). But there’s no full-sized SD slot, there’s a proprietary power adapter, and the single USB port is a freaking micro-USB port, which is worthless. To connect a real USB device, you have to use a supplied dongle. Don’t lose it. There’s also a micro-HDMI port. I’d rather have another USB port, frankly.

Like the W3, the optional keyboard dock is cheap and plasticky, and it isn’t going to win any ergonomic awards. It has no pointing device built-in, so you will need to touch the screen to navigate or select items, or use a Bluetooth mouse (or, as I do, another mouse with that damn USB dongle). But I can actually work on it. I wouldn’t want to use it every day. But it does get the job done.

So. Why am I even reviewing this thing?

As noted previously, I’ve found myself actually using the W3. This validates my notion that Windows can work on a mini-tablet. And I’ve put up with its downsides simply because I think the general form factor is viable. If this thing had the body and screen quality of an iPad mini, I’d be singing its praises.

Alas, it does not. So while I can’t recommend this specific device, I can say this: Windows mini-tablets do make sense and address some interesting needs. The first, of course, is for a companion device, one that you will use for occasional email, web browsing, social networking, game playing, and media (music, videos) consumption. Today, the iPad mini, Amazon Kindle Fire HD, Google Nexus 7, and some other Android tablets are all better options overall, frankly.

The second, and this one interests me specifically, is for a secondary travel companion, one you might bring on short business trips. Like I said, I don’t want to write on this thing regularly, but it would be a joy to be able to travel for 1-2 days with only this one miniature PC and get real work done on the road. You can do this with the W3, but a better screen would make all the difference in the world.

I’m suspicious of the kind of thinking that assumes that some future change will make everything OK and on that note, I’ll just warn you that the future I’m about to describe could ultimately prove to be disappointing too. But here goes. By this holiday season, we will have four more mini-tablets from which to choose, three from Microsoft’s PC maker partners and one, a Surface Mini with an 8-inch screen, from Microsoft itself. Surely one or more of these coming devices will fulfill the promise of the W3.

But if you just can’t wait, make sure to find a place locally that has this device on hand so you can see whether the screen and weight/density of the W3 aren’t showstoppers for you.

The Acer Iconia W3 is this close. I can’t recommend it, but if you know what you’re getting into, it does offer a tantalizing glimpse of the future.