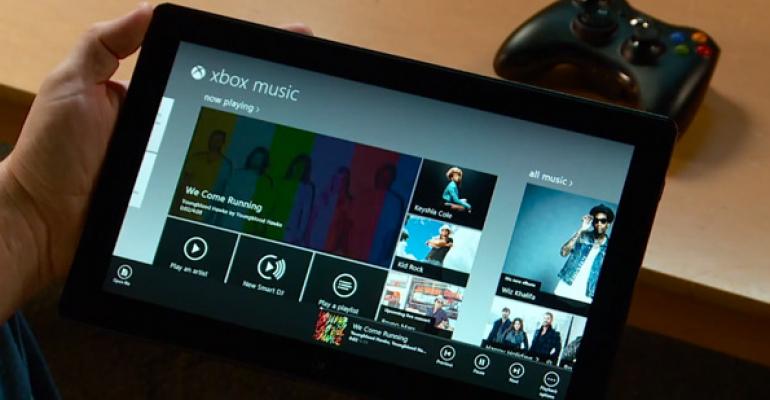 Here’s a new update to Xbox Music Book. This release includes many changes to the Windows 8/RT section of the book, which is now essentially done, at least in first draft form. Looking ahead, it’s time to start examining some publishing strategies and to settle on a final name for the book.

With this update, I have a roughly completed section about the Music app in Windows 8/RT. I have some concerns about the task-to-task flow, but I’ll put off examining that more closely (as well as figuring out what’s missing) until I’ve completed blocking out the Windows Phone 8 and Xbox 360 sections. I’ve added a (currently empty) section about managing your Xbox Music account to the end of the book as well since it didn’t make sense to cover this information in the Windows 8/RT section.

The Windows Phone 8 section remains the most incomplete bit. Hopefully I can make some headway on that this coming week. I did add a few tasks, however, including “Download music,” the Smart DJ bits of “Playlists and Smart DJ mixes,” and “Pin favorite music to the Start screen.” But don’t be fooled by the progress: This sections isn’t really gelling in any way yet, and I need to sit down and punch out an exact list of tasks. Soon.

The Xbox 360 section is almost complete, though I’m not sure I worked much on that this week: Only the Now playing tasks need to be written.

The book is now roughly 67 pages with figures. (I was curious so I checked; it’s about 32 pages without figures.) This about the length of a long “Secrets” book chapter, I guess, though of course it’s going to get bigger.

Before moving on, I’d like to discuss two non-writing-related issues.

First, I need to start looking at the ways in which the finished book will be published. Ideally it will be as broad as possible, but for starters there will always be a plain PDF version of course, plus one that targets (and is optimized for) Kindle. I’d like to create a native Windows Phone 8 app version as well. But if you have any ideas about other formats I shouldn’t ignore, please let me know.

Second, I really need to find a decent name for the book, one that would lend itself to other books as well, since I figure this will eventually be part of some series of digitally published books. Obviously, I can’t use “Secrets”—though “Xbox Music Secrets” certainly has a nice ring to it—or any other existing mainstream tech book series name. I’m considering whether the series should be named something like “Paul’s Pocket Guides” (or whatever) so this one could be “Paul’s Pocket Guide to Xbox Music” or “Paul’s Pocket Guide: Xbox Music.”

I also sort of like the travel theme. If you look at the various book series that travel guru Rick Steves publishes, for example, you’ll see a few series names that could make sense: Pocket Guide, Snapshot, Guidebook. (This is perhaps where I got the “Paul’s Pocket Guides” thing noted above.) He also just uses his name, like “Rick Steves’ Paris: Perhaps it’s just Paul Thurrott’s Xbox Music. (Though I think my last name is hard enough to spell that this may be a bad idea.) Again, any thoughts are appreciated.