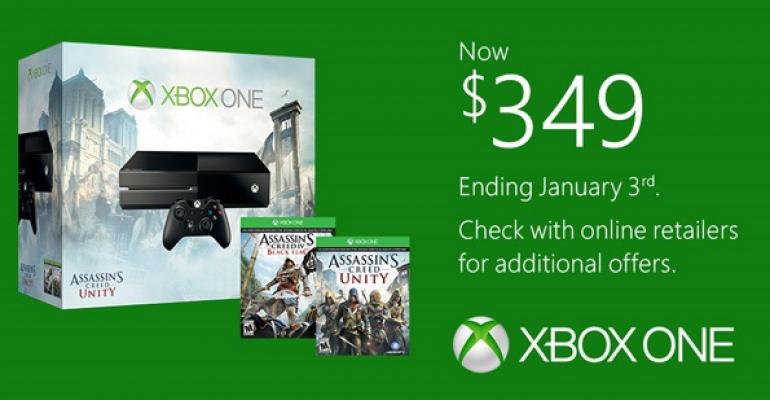 Microsoft's Next Big Mistake: Increasing the Price of the Xbox One

If you haven't purchased an Xbox One yet, you'll need to move quickly as the current pricing of the console, which now starts at just $349 in the US, is a limited-time promotion. And despite the fact that this promotion has catapulted Xbox One ahead of Sony's PlayStation 4 for the first time, Microsoft intends to return to the original higher pricing starting on January 4. So the company isn't exactly getting the New Year off to a good start.

You forgot this pricing was a limited-time promotion, didn't you? I kind of did, too, though as I wrote in early November, Microsoft would be crazy to raise the price of this console again after the holidays. Well, they're officially crazy: Today, Microsoft issued a blog post reminding people that the promotion was coming to a close.

Before getting to that, let's see what's currently available.

Xbox One with Kinect: Assassin's Creed Unity Bundle. Normally, $499, this bundle is selling for $449 through January 3, 2015. It includes the Xbox One console with Kinect, one wireless controller, chat headset, HDMI cable, and download tokens for three games: Assassin's Creed Unity and Assassin's Creed IV: Black Flag, and Dance Central Spotlight. This is also a great deal as the console with Kinect normally costs $500 by itself, so when you add up the promo ($50) and three games at $60 each, you're looking at $230 in savings. Or $280, when you add in that $50 Amazon gift card.

There are other Xbox One offerings floating around, but none are quite as impressive as those two. For example, the Xbox One Limited Edition Call of Duty: Advanced Warfare Bundle is currently $580 at Amazon.com; this includes a limited edition version of the basic Xbox One console (no Kinect) with a 1 TB hard drive (vs. 500 MB in other versions) and a custom skin, a limited edition wireless controller, chat headset, HDMI cable, and a download token for Call of Duty Advanced Warfare. It's hard to figure out the savings on this one since the 1 TB drive isn't offered anywhere else, but if you figured $100 for that plus $60 for the COD game, you're looking at perhaps breaking roughly even and getting a unique version of console and controller.

Some retailers are offering special deals, too, so if you have a physical store to visit, you may be able to get some additional goodies. But again, it all ends on January 3.

So why the frick would Microsoft actually raise the price of this console after seeing such great success at the reduced price? Your guess is as good as mine: Microsoft isn't talking, and while the firm promises a nice selection of new games for 2015, that's to be expected. Honestly, holding the price would have forced Sony's hand on pricing, too. And I think hurting the competition is as viable as going loss-leader on the hardware. Doing both only makes sense.