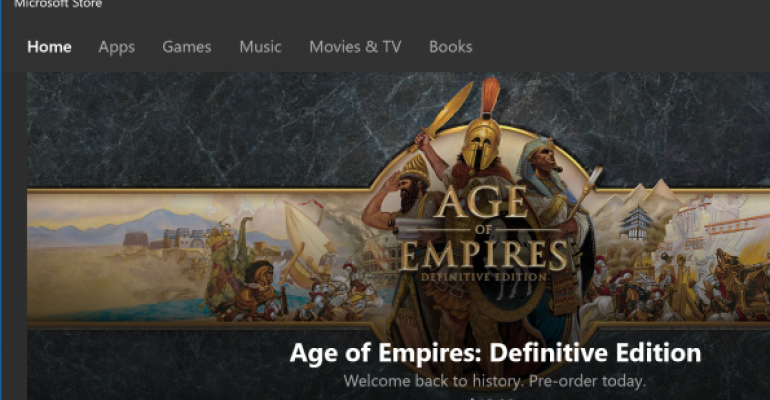 Microsoft Decides to Rebrand the Store in Windows 10

Microsoft has multiple stores across their ecosystem.

There is the Windows Store that is part of Windows 8.1 and Windows 10 where you can get apps in all kinds of categories and genres. This store is available on multiple platforms such as HoloLens, PC, Mobile, Surface Hub, and Xbox One.

On the companies gaming console there is a version of the Xbox Store where you can get apps and games that are just for the console but you can not shop for apps to just download to your other devices. Current pre-release builds of the console's dashboard includes a change to the store that allows you to purchase hardware such as consoles and controllers. They even offered the Xbox One X Project Scorpio console for pre-order through a prerelease build of the Store. This feature is expected to be part of the console's Fall Creators Update which is expected sometime in the next month or so.

Note: There has been no test of a name change for the store on the Xbox One but they are still in development of the next feature update so it is something I am keeping an eye out for over the next few weeks.

Then of course there are the brick and mortar Microsoft Store's in cities across the globe that give you a place to actually walk in and purchase computers, consoles, accessories, physical software/games, and digital versions as well if that is your preference. Don't forget the online version of the Microsoft Store which is a companion site for those who are not near a physical Microsoft Store.

With today's widely reported news that a rebranding is showing up for some Windows 10 users of the store logo and name on their devices it would appear Microsoft is looking to bring all these similar variations under one roof. Imagine being able to access any version of the Microsoft Store on any platform and do your shopping for all of the products offered by Microsoft across these resources.

Convenience is the name of the game and this makes a lot of sense as you look at all the elements coming together across Windows 10 platforms.

The rebranding begins with the name - Microsoft Store - this aligns with the physical stores and opens up the opportunity to make the full inventory of the stores available through the store app on Windows 10. I expect it would look very similar to the hardware side of the store on the Xbox One that is being tested right now.

The next element is the logo branding and the return of a little color to what has otherwise been a flat white icon since the release of Windows 10:

These two elements come together when you see a shortcut to the store on Windows 10: Currently I am only seeing this change from Windows Store to Microsoft Store on Windows 10 Version 1703 in the Release Preview Ring. This is the ring that early app updates are released to ahead of their general availability to Windows 10 users.

Are you seeing the change on your system? If so, what do you think of the rebranding?