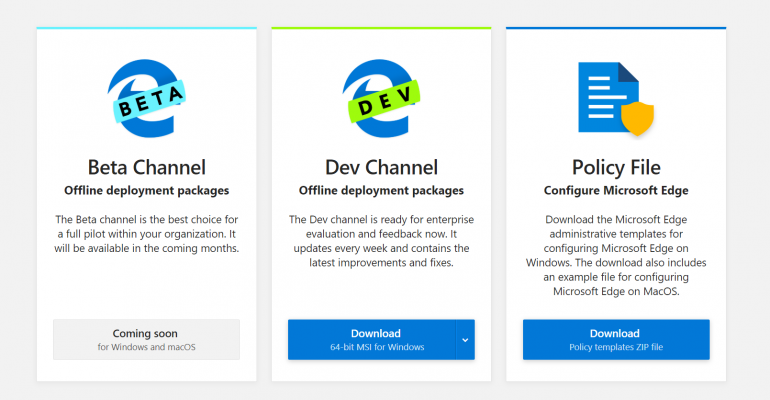 Enterprise customers can now obtain the Chromium-based Microsoft Edge download and begin testing the company’s latest browser within their organizations. Microsoft is providing an enterprise-level roadmap and other tools to assist with this early testing.

Microsoft said last year that they would build a new version of their Edge web browser based on the open-source Chromium rendering engine and offer those browser builds on not only Windows 10 but also Windows 7, 8.1 and macOS. The company is now inviting enterprise customers to grab these Microsoft Edge downloads and begin their own in-house testing.

Earlier this week at the company’s annual Inspire partner conference, Microsoft released details about the Chromium-based version of Microsoft Edge along with information and tools to begin your enterprise testing. With this announcement, they are sharing with customers that the new Edge is ready for testing for both business and enterprise customers.

The first test builds of Microsoft Edge were made available to the general public back in April and since then, daily canary and weekly developer channel builds have been released on a regular cadence. During Microsoft Build 2019, specific enterprise-focused features were announced and have steadily been making their way into development builds over the last two months. The latest releases of the Microsoft Edge download in the developer channel now hae enterprise features available by default. Other resources being made available for enterprise testing include offline installers and group policy templates to assist in rolling out the Chromium-based Edge to your testers.

For those enterprise customers concerned about compatibility with not only their line of business apps but the web, in general, that should be much less of a concern compared to the original version of Edge that is integrated with Windows 10 compared to this Chromium-based version of the browser.

In addition, early testing should not be across every endpoint in the company but on a select number of devices so that IT pros can better evaluate Microsoft Edge’s potential as a replacement for other browsers like Google’s Chrome and Mozilla’s Firefox.

Enterprises may still require access to Internet Explorer 11 for line of business apps and services. With the Chromium-based version of Edge’s new IE Mode, users will be able to remain in the new Edge while still accessing sites which require IE 11 capabilities like ActiveX, Silverlight, and Browser Helper Objects. That means users can remain in one browser instead of having two open for web browsing/work needs. IE Mode in the Chromium-based version of Edge utilizes the Enterprise mode site list.

The Chromium-based version of Edge has full group policy support so that to manage the configuration of your deployment in a testing environment and upon release for your entire network. Support will also be available for common deployment and management tools like Mobile Devie Management (MDM), Microsoft Intune, System Center Configuration Manager (SCCM), and other third-party tools.

The company is also focused on delivering a full suite of security and data protection tools to the new version of Edge which is currently available in the shipping version of Microsoft Edge. This will include Application Guard, Microsoft Defender SmartScreen, and Microsoft Information Protection.

One enterprise feature that is already part of the canary and developer channels for the Microsoft Edge download is signing in using Azure Active Directory (AAD) accounts. This will enable the cross-device syncing of user information including favorites and other browser data while respecting your company’s compliance obligations.

Other features on the enterprise roadmap for the Chromium-based version of Edge include:

For the latest news and updates for the new Edge in your organization, just visit the Microsoft Edge Insider for Enterprise page where you will find links to downloads, policy files, and additional information about deploying and managing Microsoft Edge.