/sites/all/themes/penton_subtheme_itprotoday/images/logos/footer.png
Recent
Recent
Don't Let Your ESM Partner Blame Inflation for Their Rising Costs
Aug 19, 2022
How Not to Waste Money on Cybersecurity
Aug 18, 2022
Getting a Certification Versus Getting a Certification You Can Use
Aug 16, 2022
Office Design for Neurodiverse Employees: Remain Fluid and Adaptable
Aug 16, 2022
Featured
Container-based Storage Ready for Widespread Adoption
Aug 09, 2022
IT Security Decision-Makers Struggle to Implement Strategies
Aug 03, 2022
IT Sustainability in 2022: Top Stories So Far
Aug 01, 2022
AWS Reinforces Cloud Security Efforts at re:Inforce 2022
Jul 29, 2022
Green IT
brought to you by
News Analysis 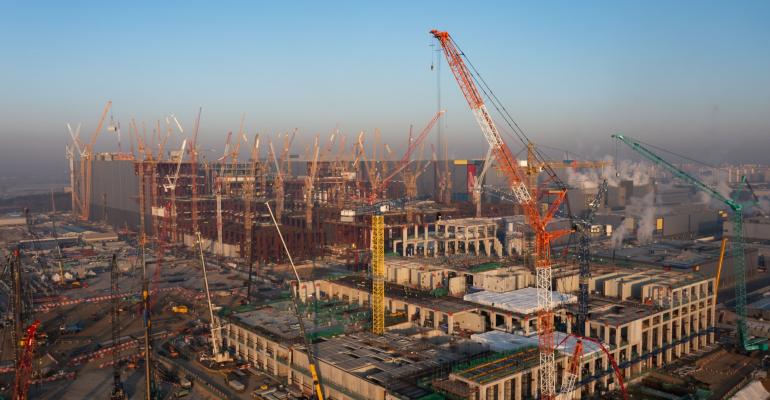 Some projections indicate the industry will double in size over the next decade, meaning efforts to mitigate its climate footprint need to accelerate. Absent pressure from governments, it will largely depend on the chipmakers themselves.

(Bloomberg) -- The CHIPS and Science Act, which President Joe Biden is poised to sign into law next week, was pitched as a once-in-a-lifetime chance to revitalize the US semiconductor industry and counter Asia’s manufacturing power.

What went less discussed was the legislation’s environmental impact. The bill is poised to pump $52 billion into an industry that devours energy and produces toxic waste -- at a time when a global surge in chip demand is already turning companies into bigger polluters.

With both the US and Europe racing to rebuild their chipmaking infrastructure, environmental concerns are taking a back seat, said Pauline Weil, a researcher at Brussels-based economic think tank Bruegel.

“Countries are really not thinking about this,” she said. “It’s offering on a plate billions of subsidies with very little strings attached, and the strings are not attached to the environment.”

The European Union is proposing some $43 billion for its own chips legislation, subsidizing a building boom by the world’s largest chipmakers. New projects from Intel Corp., Samsung Electronics Co. and Taiwan Semiconductor Manufacturing Co. are poised to sprout up in Germany, Ohio and Arizona.

An examination of the companies’ corporate responsibility reports shows that their power and water use is already on the rise. That’s not surprising in a growing industry, but chipmakers like Intel have vowed to slash their emissions and water consumption. Keeping hazardous waste out of landfills is another challenge. The rush to add new manufacturing will only make that harder.

Some projections indicate the industry will double in size over the next decade, meaning efforts to mitigate that footprint need to accelerate. Absent pressure from governments, it will largely depend on the chipmakers themselves how much of that expansion translates into environmental damage.

Making semiconductors is a messy, expensive business that’s getting more difficult as it butts up against the laws of physics. Chipmakers run giant factories that operate 24 hours a day, seven days a week, trying to carve out a return on the billions of dollars required to equip them before they become obsolete. The machinery typically has a useful life of less than a decade.

The process requires a lot of energy, water and toxic chemicals. And though the largest chipmakers have made environmental progress -- their use of renewable energy in the US is one highlight -- the companies concede that they they have work to do. 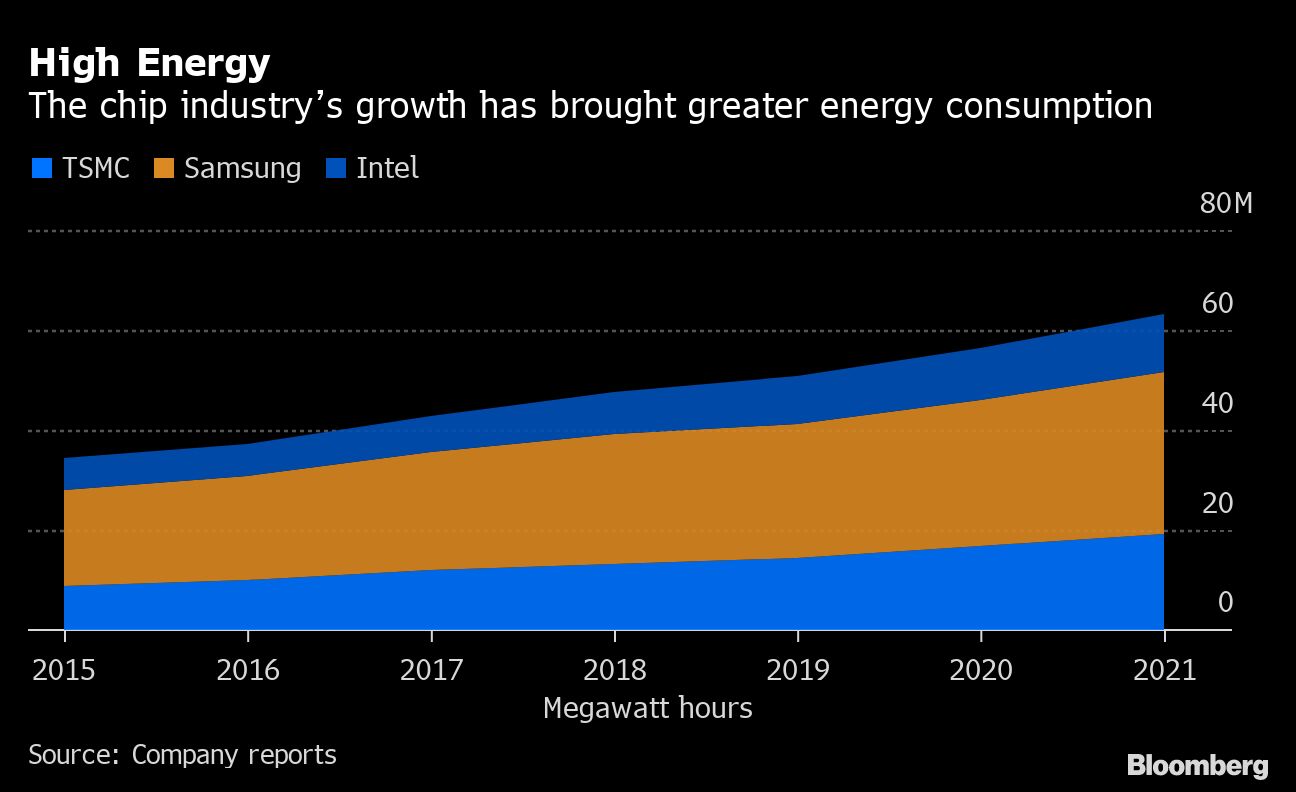 Take Samsung, the world’s largest chipmaker by revenue. The South Korean company’s overseas semiconductor sites -- in the US, Europe and China -- already operate wholly on renewable energy. But it’s still working on developing sustainable energy sources in other parts of the world, including in South Korea, where its biggest factories are located. All told, only about 16% of its energy use was from renewable sources in 2021, up from 13% in 2020.

TSMC similarly powers its overseas operations using clean electricity. But at home in Taiwan, where the majority of its plants are, the total is less than 10%.

“We know it is very important to drive renewable energy in Taiwan,” said spokeswoman Nina Kao. “Taiwan is a really small island with limited resources.”

Intel is doing better, partially because it has access to greener energy near its sites in Oregon, Arizona and New Mexico. The company got 80% of its electricity from renewable sources in 2021, up from 71% in the prior year.

Still, its total energy use -- partially due to the additional complexity of new manufacturing technology -- went up 9.4% in the period to 11.61 billion kilowatt hours. That’s about twice what the city of San Francisco uses in a year.

Intel can point to progress over the longer run. Its emission of two categories of greenhouse gases is down 19% from where it was in 2000, according to its most recent corporate responsibility report, when the output totaled more than 4 million metric tons of carbon dioxide. But since dropping to less than 2 million tons around 2010, the emissions are on the rise again and ended 2021 at 3.37 million tons. Again, the growing complexity of making chips has forced the amount back up, Intel said.

The company’s goal is now to reduce emissions to “net zero” by 2040. According to Todd Brady, Intel’s chief sustainability officer, the industry deserves credit for pursuing a science-based approach to solving problems such as emissions and waste -- rather than simply using cash to buy offsetting credits. But in some areas, the easy work has been done. The struggle now is to reduce that impact to nothing.

“You shouldn’t let us off the hook,” he said.

Intel aims to be “net positive” in water use by 2030, meaning it will use less than it produces. TSMC has pledged to be net zero emissions by 2050, and Samsung is pushing a new set of standards and guidelines that it says more accurately reflect the impact of the chip industry.

Then there’s the issue of waste. Chipmakers say they’ve made significant progress on keeping potentially dangerous materials out of landfills. In some cases, they’ve figured out ways to reuse or recycle substances such as sulfuric acid and metals that are key to the chip production process. But more production means there will be more waste to process, and that could strain recycling systems.

For now, the trends are heading in the right direction. Intel generated 344 metric tons of waste in 2021, down from 414 the prior year, and only sent 5% of that to landfills. TSMC, meanwhile, has dumped less than 1% of its waste for 12 consecutive years. Samsung reported a 96% waste-recycling level, with its chip division sending zero to landfills last year -- a first.

The industry also argues that chips themselves have made the world a greener place. A chip-heavy Nest thermostat, for instance, can keep consumers from wasting electricity. But that argument is a double-edged sword, said Christopher Knittel, a professor of applied economics at the Massachusetts Institute of Technology.

“If you’re going to take credit for the Nest thermostat, how much blame should you take for the 12-miles-per-gallon muscle car your part was in?” he said.

The chip industry emits roughly 100 million tons of carbon dioxide per year -- a level equivalent to the country of Belgium -- and it’s going to be hard to bring that down, said Peter Spiller, a partner at McKinsey & Co. focused on sustainability.

“But at least players have recognized this,” he said. “They’ve set very ambitious targets for themselves.”