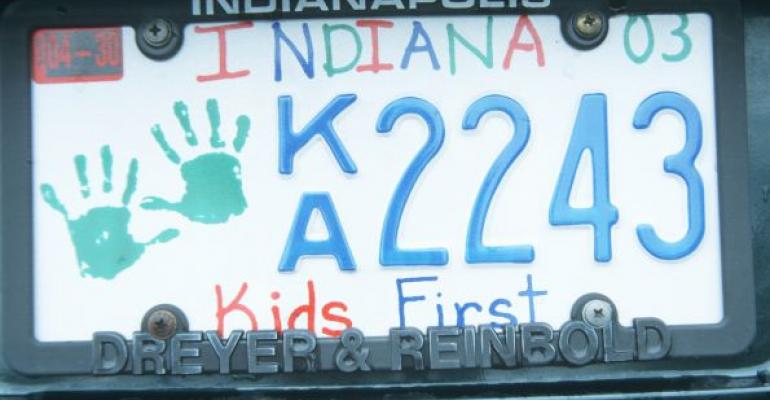 Use T-SQL to Generate a Sequence

Our challenge for this article involves generating a sequence of license plates between two input license plate numbers, for an input license plate type. By type, I’m referring to the fact that in different locations (e.g., different states in the United States), as well as in certain locations in different time periods, the rules can be different. For example, currently the license plate system in Washington state uses the form AAANNNN (A = alpha, N = numeral), whereas the current system in New Jersey uses the form ANN-AAA. Some systems have a straightforward right-to-left significance order (from least to most) for the characters (e.g., in Washington state, the order is 7654321, where 1 represents the least significant character). Other systems have a more specialized order (e.g., in New Jersey, the order is 321-654). Also, some systems don’t use certain letters in certain character positions. As an example, see the Wikipedia article “Vehicle registration plates of New Jersey” at en.wikipedia.org/wiki/Vehicle_registration_plates_of_New_Jersey. Note that the New Jersey license plate system that was first issued in 2007 didn’t use the letters D, T, or X in the first position or the letters I, O, or Q in any position.

For the purposes of this challenge, we’ll keep things simple. Suppose that you need to support two plate system types called WA2009 and NJ2010. The system type WA2009 has the following rules:

The system type NJ2010 has the following rules:

To test your solution, you can use the following code to request a sequence of WA2009 plates:

You should get a sequence with 260,000 plates, shown in abbreviated form in Figure 1.

You can use the following code to request a sequence of NJ2010 plates:

You should get a sequence of 46,000 plates, shown in abbreviated form in Figure 2.

I suggest that you try to come up with your own solution before looking at mine.

The last two attributes probably deserve further explanation. The validchars attribute holds a string with the valid symbols for the current character position in the order that the symbols are supposed to advance. For example, a character position that’s supposed to support the characters 0 through 9 will have a validchars string '0123456789'. A character position that’s supposed to support the characters A through Z, excluding D, T, X, I, O, and Q, will have the validchars string 'ABCEFGHJKLMNPRSUVWYZ'. Think of the symbols in a validchars string with a length n as representing in left-to-right order digits in base n. So, for example, in the last string A is digit 0 and Z is digit 20 in a base-20 system. You can think of a license plate system as a mix of characters, each representing a digit of its own base, using its own sequence of symbols.

The digit that the current symbol represents (e.g., in an earlier example, recall symbol A was digit 0 and symbol Z was digit 20) is computed as the character position of the current symbol in the validchars string minus 1. So, to map a license plate to an integer value, you sum the products

Note that the function is implemented as an inline table-valued function and not a scalar one, because of performance reasons. To test the function, run the following code:

Listing 3 has the definition of the ValueToPlate function, which maps an integer value to the license plate that it represents.

The function calculates the digit (0-based ordinal) that the symbol in each character position represents; this is achieved with the following expression:

To understand the logic, think of an example from the more familiar decimal system. To isolate the second digit from the left in the value 1,759, you use

After the digit is computed, you translate it to the symbol that it represents, with the expression

The rest of the logic in the function is concatenating the symbols based on their character positions, using the FOR XML PATH option.

Again, even though the function is supposed to return a scalar value, I implemented it as an inline table-valued function for performance reasons. To test the function, use the following code:

Now that you have the two mapping functions, you can proceed to the next step, which is returning a whole sequence of license plates between two given ones. To achieve this, you first create a table function (call it GetNumsRange) that returns a sequence of integers between two input ones. Listing 4 provides an example for such a function.

The final step is to query GetNumsRange, passing two integers representing the two license plates bounding the desired range. The input integers can be computed with the mapping function PlateToValue. Then you can map the result integer values to license plates using the ValueToPlate function. Listing 5 has the definition of the function GetPlatesRange encapsulating this logic, returning for each entry in the sequence both the license plate and the integer value that it represents. You can use the latter, for example, for sorting purposes.

The following code uses our new function to return the sequence of WA2009 plates from AAA0000 through AAZ9999:

Figure 1 shows the output of this code, in abbreviated form.

The following code returns the sequence of NJ2010 plates from A00-AAA through Z99-AAZ:

Figure 2 shows the output of this code.

I hope you found the license plate sequence challenge interesting; I know I did. I’ll leave you with a couple of additional challenges involving license plates. Suppose that you’re given a table called PlatesWA2009 with an attribute called plate, holding a row for each already assigned license plate from the system WA2009. Your tasks are the following: