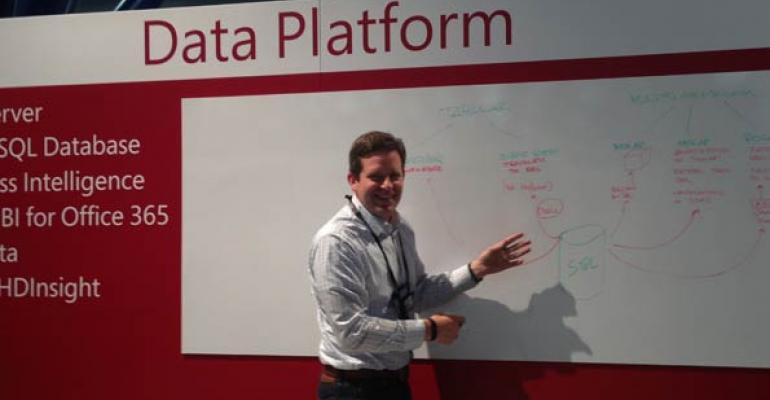 I recently had the chance to sit down with Eron Kelly, general manager for the Data Platform division at Microsoft. We talked about the strides that Microsoft has been making with the newly released SQL Server 2014 and Power BI for Office 365 tools.

When I asked Kelly to explain the relationship between SQL Server and Power BI, he said that the gut of Power BI—meaning the analytical engine—is the same technology that lives in SQL Server. Stated differently, Power BI leverages the business intelligence (BI) and analytics capabilities of SQL Server for its cloud service, which is transparent to the user.

“So what’s neat about that is that for IT teams and users, they don’t need to learn how to install SQL or configure it or set it all up—it just works,” Kelly explained.

And in essence, Microsoft’s strategy for its Power BI toolset is to make it brain-dead easy for anyone to use. Kelly added that Microsoft’s emphasis for Power BI is to make it relatively easy for users to get data and analyze it in a core, visual way.

“With the release of SQL Server 2014, we now have in-memory technology across all three of those workloads. And that’s really important because it allows the user experience, in the case of BI, to be really fast,” Kelly said.

“It is truly amazing. Things that used to take thirty, forty minutes, where I could only run at the end of the day, now only take 30 seconds. Now, I can run queries and rebuild my reports in real time. And that allows you to really transform how you think about your business because you have access to real-time data about what’s happening to make decisions throughout the day, rather than waiting at the end of the day,” Kelly said.

One of Edgenet’s customers is a national auto parts store that sells parts online and in stores. One of the challenges the client faced was the fact that there’s typically a local mom and pop store in every city, which makes it difficult to compete in an online setting because prices would be different at every location across the nation. Kelly explained that individuals would often go to the site to look at a product, only to compare it to an ongoing promotion at the local level.

“With the in-memory engine that connects faster, they’re now able to do dynamic pricing. So you’re literally in a website clicking 'show me the price,' and the site looks up other prices in the region to calculate what the new price would be relative to a business rule. That’s all within a click, where you couldn’t do that before,” Kelly said.

And that’s just one example of how one organization has transitioned and changed the way they’ve done business.

“Now, SQL Server 2014 allows your customers to be far more responsive and a lot more competitive in the market,” Kelly said.

Rev Up Application Performance with the In-Memory OLTP Engine
Jan 16, 2014