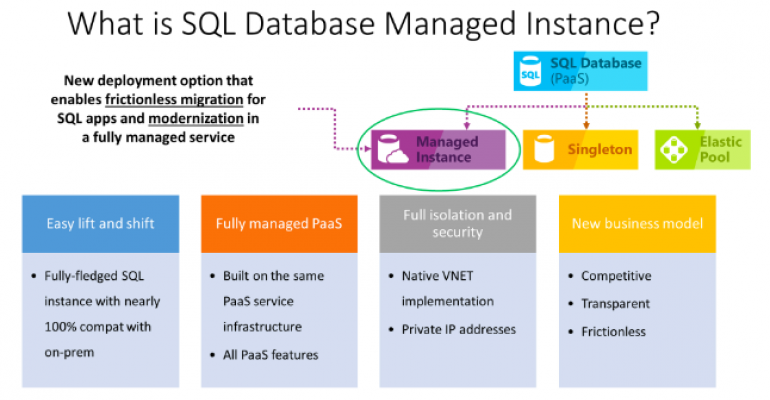 Azure SQL Database Managed Instance: Easing the Move from On Premise to Cloud

Azure SQL Database Managed Instance promises to fill a significant gap for customers looking to lift and shift applications backed by SQL Server from on premise to cloud.

Microsoft has announced the latest addition to its Azure cloud offerings for SQL Server: Azure SQL Database Managed Instance. This new product is still in preview, but it promises to fill a significant gap for those customers looking to lift and shift applications backed by Microsoft SQL Server from on premise to the cloud. Managed Instances join the other offerings--of both the Singleton and Elastic Pools variety--for the Azure SQL Database line of products and services.

Until the release of Azure SQL Database Managed Instance, the options for Microsoft Azure SQL Database deployments constrained access to any SQL Server instance level settings. There were also no options in either Singleton or Elastic Pools for SQL Server Agent, the job scheduling and execution service for Microsoft SQL Server. Database administrators found the lack of control over instance-level settings such as min/max server memory and parallelism to be too limiting to effectively control performance.

[Interested in digging deeper into this and related topics? IT/Dev Connections (Oct. 15-18 in Dallas) delivers the training you need to move your career forward. Register today to connect directly with your peers, our speakers and our legendary content!]

Even more damning was the lack of SQL Server Agent in either Singleton or Elastic Pools. This gap severely limited the ability for enterprises to lift and shift their SQL Server instances from on premise to the cloud because the agent is used extensively for SQL Server job scheduling--for everything from routine database maintenance tasks to complex data warehouse loading processes, as well as critical business logic that runs in the data layer but requires execution at specific times or on a repeatable schedule.

The inability to control instance-level behavior for SQL Server and to schedule specific tasks natively inside of SQL Server through SQL Server Agent forced a decision between remaining in an “earthed” solution on premise and migration to the Azure Cloud via a dedicated Azure VM (IaaS). While available, the cost structure for Azure IaaS is significantly different than what is offered through Azure SQL Database, whether Singleton or Elastic Pools. The announcement of Azure SQL Managed Instance changes the playing field significantly.

Platform as a Service (PaaS)

Azure SQL Database Managed Instance is slated to become the preferred option for enterprises looking to migrate their existing on premise--and even existing IaaS deployments--to a fully managed platform as a service (PaaS) offering. PaaS in Azure SQL Database Managed Instance means hardware purchasing, servicing and implementation are no longer worries for the enterprise. Servicing the infrastructure is all controlled by the Azure platform. It also means all patching and upgrades are handled behind the scenes and off the plate of DBAs, freeing them for more strategic tasks.

Thanks to being backed with Azure Premium Storage, Azure SQL Database Managed Instance boasts 99.99% uptime. Redundancy built into the structure under Azure SQL Database Managed Instance also means high availability is built into the architecture. This is a significant benefit and cost savings over traditional on premise AlwaysOn Availability Group (AG) deployments in that there is no cost of procuring and staging a fully clustered environment with at least a complete matching server. It’s also beneficial from a servicing and management aspect because any failovers allowing for redundancy in a Managed Instance are completely controlled within the Azure architecture.

Highly available solutions require senior level staff to not only build but also administer. But when deploying or migrating to a Managed Instance, the complexity in building the high-availability structures is removed from the process altogether. Most of the routine administrative tasks typically performed by database administrators are now automatically managed by the automation afforded in the Azure platform: backups are automated and retention is configurable with Azure SQL Database Managed Instance, yet customers still can initiate additional backups should the need arise. Native to Azure SQL Database Managed Instance is the ability to recover to a point in time, allowing for recoverability immediately prior to any event that would require restoration and salvage of a database.

Currently under preview, there are two offerings for hardware:

Hard Limits on Database Count May Be Cause for Concern

Currently, Azure SQL Database Managed Instances have a hard cap of 100 databases per managed instance. While that is sufficient for most enterprises, certain lines of business such as IaaS providers with hundreds and even thousands of databases per instance, will find that limit likely makes Managed Instance incapable of supporting their structure in a pure lift-and-shift process. If horizontal scaling is possible for an enterprise’s needs, then it’s possible that scaling from a single on premise SQL Server instance to multiple Managed Instances is still a viable option if the math plays out. There are significant cost savings when PaaS is involved. The reduced overhead of managing hardware, labor costs, power and service contracts, as well as the efficiencies that come into play, may very well exceed the additional costs of multiple Managed Instances over a single server hosted in a company’s data center.

If Managed Instance sound like an option worth pursuing, Microsoft has a variety of resources to aid in the decision-making process. In addition to reaching out to your dedicated Microsoft Partner you can also find resources at the links below.