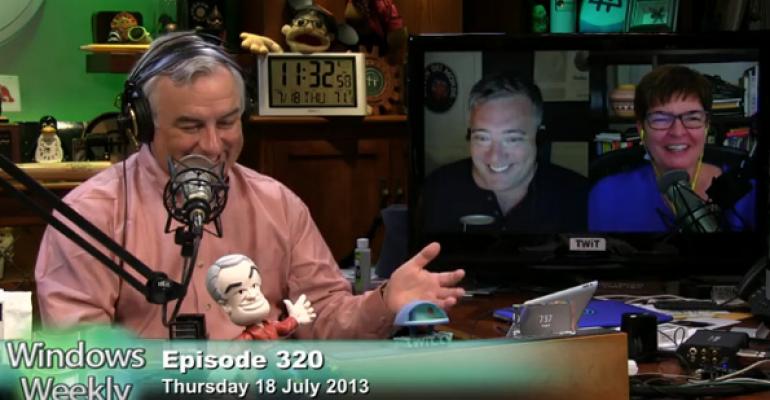 The one where we discuss Microsoft's earnings announcement

In the latest episode of Windows Weekly, Leo Laporte, Mary Jo Foley and I discuss the good and bad in Nokia's earnings, Windows Phone 9 rumors debunked, contract-free phones, Intel earnings, more about the Microsoft reorg, Office 365, and some late-breaking news about a $900 million Surface RT in Microsoft's earnings.

Tip of the week: System recovery in Windows 8 is just part of this long journey we're on

Resistance to the removal of system image backup in Windows 8.1 has the Luddites up in arms. But it's not that bad.

Software pick of the week: OWA for iPad and OWA for iPhone

Because I never get tired of using iOS apps for my software pick of the week. But seriously…

Enterprise pick of the week: RDS on Windows Azure VM -- Azure-hosted desktop made easier (and legal)

Codename pick of the week: InfoNav

InfoNav got a shout out in the Ballmer reorg memo. It has been officially christened as "Q&A" in Power BI. Where else might it show up? http://www.zdnet.com/microsofts-reorg-memo-infonav-moorea-and-new-meeting-technologies-still-on-the-horizon-7000018056/

http://beeradvocate.com/beer/profile/68/96567 - perfect for our tropical temperatures on the east coast this week!