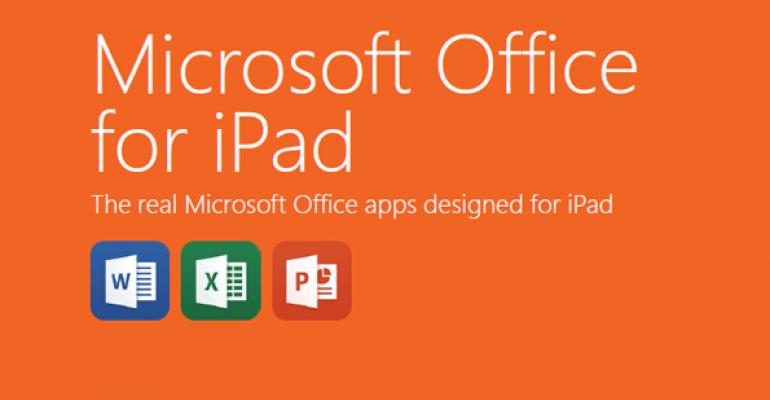 Hands-on with a tremendous new set of mobile apps

The rumors are true: By the time you read this you should be able to download Office for iPad, the first full-featured version of Microsoft Office for a mobile platform. As I had expected, Office for iPad fills a useful niche between Office Mobile for smart phone handsets and the more full-featured Office we see in Windows and on the Mac. But Office for iPad has been written from the ground up for Apple's device. And the only thing holding it back, really, is Apple's antiquated mobile OS.

I've been using Office for iPad since Monday on a loaner Apple iPad Air. The device itself is beautiful, thin and light, and iOS 7, while an improvement over previous versions, still lacks basic productivity features like the ability to run at least two apps side-by-side. So it's important to understand that the biggest limitation of Office on this platform isn't Office, it's the iPad. You can only do—or at least see—one thing at a time.

Beyond that artificial and perhaps temporary limitation, Office for iPad is surprisingly impressive.

It consists of three mobile apps, Word, Excel and PowerPoint, so it's not one "thing" like Office Mobile (for iPhone, Windows Phone or Android handsets), but rather separate apps to download and install.

OneNote was previously available on iPad, and as it turns out, that app's ribbon-based UI was a preview of what Microsoft was planning for its other apps on iPad. But this isn't some gigantic UI: It's really more of a one-row toolbar, with associated tabs. This smaller UI is more appropriate for the relatively small iPad screen.

One side note: This fairly pedestrian UI means that the sort of user interface innovation we see in apps like OneNote for Windows 8 is nowhere to be see in Office for iPad. I'm not sure what this means for the promised Office "Touch" for Windows 8, but I think simple and clear is better than crazy but innovative when it comes to productivity ware like Office. People just want to get in and get work done, not figure out something new.

And they're going to be able to get work done. I suspect some people will pedantically run down individual Office features, comparing what's here to Windows or whatever. I'm not that dedicated, but based on a few days of experience, I can say that it's pretty complete given the form factor and the limitations of this kind of device. And Microsoft promises to update these apps very regularly going forward, just as they do with Office 365.

Speaking of which, Office for iPad is free. If you don't have an Office 365 subscription, you can still read documents, mess around with spreadsheets, and even give presentations, using documents on the device or in OneDrive (or OneDrive for Business). But if you wish to edit or create new documents, you'll need an Office 365 subscription for individuals, homes or business. And Office for iPad goes against a 5 tablet count that is separate from the PC/Mac count. The licensing is really liberal.

As for how powerful these apps are, consider this. I loaded up my 575 page Windows 8.1 Field Guide Word document, and while it took a while to download originally (it's stored in OneDrive for Business as part of my Office 365 Small Business Premium subscription), the performance reading and editing the document was impressive. In fact, it was ... amazing. This is the real deal.

As important, the fidelity of the document was perfect: Everything was formatted correctly, including images. I could actually write a book on this thing if I wanted to. (Relax, I don't.) Microsoft claims that documents look as good on the iPad as they do on the PC. And I gotta say. They really do. That alone is super-impressive: With Office Mobile, Microsoft would maintain the underlying formatting fidelity, but not everything displays perfectly. With the iPad, you get the full meal deal.

I spent the first couple of days just using Office on the iPad with it's on-screen keyboard and touch controls. There are some neat, um, touches in there. For example, while you will find many standard iOS controls in the app—Microsoft wants it to be familiar to iPad users—the firm also customized a few controls to make things work better for Office.

One you'll see throughout each of the apps is a custom zoom control that appears when you select text. This lets you more accurately position the cursor on text selection, something that is usually hard to do with touch. (I can't depict this in a screenshot.)

The most impressive custom control, perhaps, is the Excel keyboard. Few people know this because it's rarely used, but iOS lets developers create custom, app-specific keyboards. So Microsoft made one for Excel that is accessed by tapping the ABC/123 toggle on the top right of the normal (virtual) keyboard. When you select the 123 half of that toggle, the Excel keyboard appears. This lets you access common Excel functions like "=" (which triggers function creation).

Microsoft also smartly handles pop-up menus, which can auto-wrap if the keyboard is displayed. When you open a document from OneDrive or OneDrive or Business, it downloads from the cloud but isn't saved to the device by default, no doubt a nod to the iPad's relatively small storage capacity. (But you can pin documents so they stay on the device too.) And you can collaborate in real time on documents with other authors, and those people can be on PCs, Macs, Office Online, or iPad.

You can also use Office for iPad with a physical keyboard. Apple's Mac-based keyboard works fine with the iPad, and of course various third parties make keyboards and keyboard cases as well. It all works as expected.

Once you get past the weirdness of Office even being on the iPad, it sort of settles in. Yes, it's here. Yes, it works as expected. But ... why bother? Why even release such a product? Obviously, the success of the iPad and similar Android-based tablets—and their use as productivity devices in some cases—warrants the release. But it's more than that. Users of the iPad get built-in viewers for Office documents, and they're lousy. They don't show the correct formatting on anything but the simplest documents, making it hard for users to move documents back and forth between a PC and the device.

iPad users also have their choice of Office-like apps such as Apple's iWork applications and various third party apps. These apps let you open and edit Office documents, but they also screw up the formatting fidelity of those documents. So if you're trying to integrate your iPad into your workflow you may end up screwing up those documents, not just for yourself but for others. Only Office treats Office documents correctly.

Frankly, Office for iPad makes plenty of sense. And while some will poo-poo the possibility that iPad users will flock to these apps, I suspect they'll be quite successful. Many are already using iPad at work. This will make the iPad truly useful for this work for the first time.

Depending on whom you ask, Microsoft's release of Office for iPad is either the monumental tech story of the decade or it's too little, too late. I think the truth is somewhere in the middle—and yes, I do think they should have done this a year or two ago—but at least it's happening now. More to the point, it's not happening in a half-assed way: This isn't Office Mobile blown up to a big screen. It's a full-featured Office suite—a real Office suite, not some sad third party imitation—designed for the constraints and power of the iPad. This is a release that should impress iPad users because it respects the device.

Timing-wise, yes, Apple made iWork available for free last year when they found out that real Office was coming. But this set of apps is also arriving before Office "Touch" for Windows 8. That, too, is impressive. The Microsoft of just a few years ago would never have allowed that. And while I'm sure shipping Office for iPad is controversial in certain circles inside (and outside of) Microsoft, they made the right decision.

The individual apps are all free, but they do more if you have any kind of Office 365 subscription. How much more, you ask?

Without signing into (or up for) a subscription, you can do the following:

Open documents. You can open documents (Word documents, Excel spreadsheets, and PowerPoint presentations) from OneDrive (for individuals), the device itself, from email attachments, or from third-party office productivity apps.

Read. You can view Word documents, Excel spreadsheets, and PowerPoint presentations with the respective iPad apps.

Copy and paste. You can copy content from Office documents into the iPad clipboard and paste that content into other apps.

View comments. You can view (but not respond to) "track changes" comments.

Give presentations. In PowerPoint, you can view speaker notes, present in full-screen mode (including to other displays via Air Play), and use the software-based laser pointer, pen and highlighter tools provided by that app.

Going forward, I'll be writing a series of articles that examines individual Office for iPad features, comparing them to similar Office features in Windows, and I think you'll be surprised by how much there is and how well it all works. For now, know this: Office for iPad is surprisingly impressive, almost disarming. It's the real deal, a full-featured set of Office apps that looks and works naturally on the iPad. It's a sort of "best of both worlds" scenario for those people who do need Office functionality and have chosen iPad, a way to bridge the previously fuzzy area between the PC and the iPad. Microsoft could have simply mailed it in with this release, but they didn't. And combined with the impressive arsenal of other iPad apps that Microsoft makes, the firm is really making a case for its ability to deliver services—and apps—to the devices people are really using.

The new normal? I think so. Office for iPad is highly recommended.