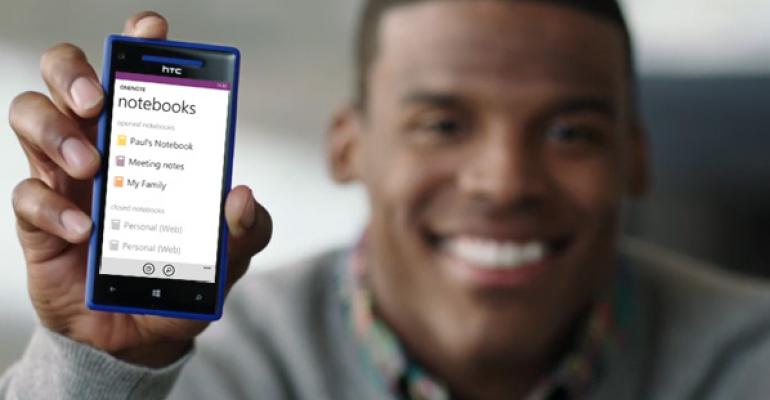 OneNote gets a big upgrade in Windows Phone 8

In Windows Phone 8, OneNote Mobile has gained significant new functionality and is now available as a dedicated app outside the Office hub. One of the key updates to OneNote is deeper integration with the system, and you can now send photos and voice memos to OneNote from outside the app.

If you’ve used OneNote on Windows Phone in the past, you know that the mobile version of this versatile note- and idea-capturing app has always been a valuable companion on the go. But OneNote has become even better in Windows Phone 8, with its own Start screen tile for quick access, voice memo recording capability, and better note navigation.

But I’m particularly interested in OneNote’s system integration. And in Windows Phone 8, you can more easily funnel (or “send”) information from elsewhere in the phone into OneNote.

Here are the types of information you can send to OneNote.

Photos. Tap and hold on any photo, select Share, and then pick OneNote from the Share screen.

Voice notes. From anywhere in Windows Phone, tap and hold on the hardware Start button. At the Listening notification, say “note” followed by a sentence to have it transcribed and inserted into a new OneNote quick note.

If you’re using the Rooms feature in Windows Phone 8, you can also create and share special OneNote notebooks with the others in the room, directly from the People hub (or from the room if you’ve pinned it to the Start screen).