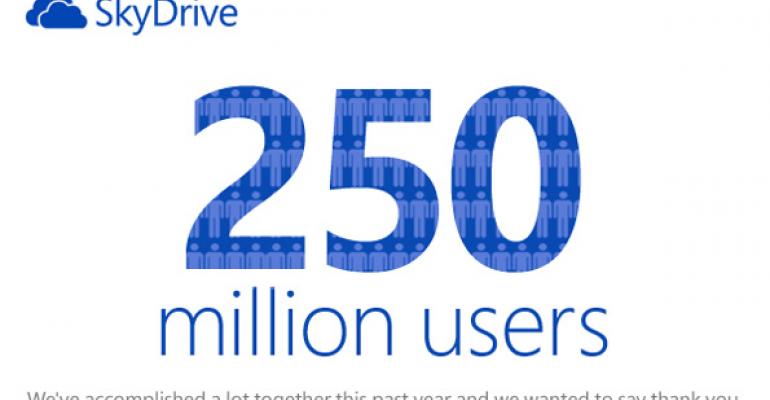 I’m always amused when people buy into the “Microsoft is dead” meme, as it relies on curiously out of touch opinions about the firm being slow moving or old fashioned. This week’s case in point: Microsoft’s cloud storage service SkyDrive now has over 250 million users, 50 million of whom came on board since Windows 8’s late 2012 launch.

It’s not just SkyDrive. There are now over 700 million Microsoft accounts, and last week Microsoft announced it had surpassed 400 million Outlook.com users too. This is a company with several billion dollars businesses and many products with hundreds of millions or, in a few cases, even billions of users. Amazing.

And now we can add SkyDrive to the growing list of examples of how Microsoft’s transition from a maker of traditional software products to one that is a devices and services firm isn’t just talk, but is in fact the single biggest technology success story of the past decade.

“Over 250 million people are now using SkyDrive as the new place to save their files,” Microsoft’s Omar Shahine writes in a post to the Inside SkyDrive blog. “We continue to push forward to a world where all your stuff is in SkyDrive, so you can always have it with you.”

As is the custom these days, Microsoft has created a nice infographic highlighting this milestone.