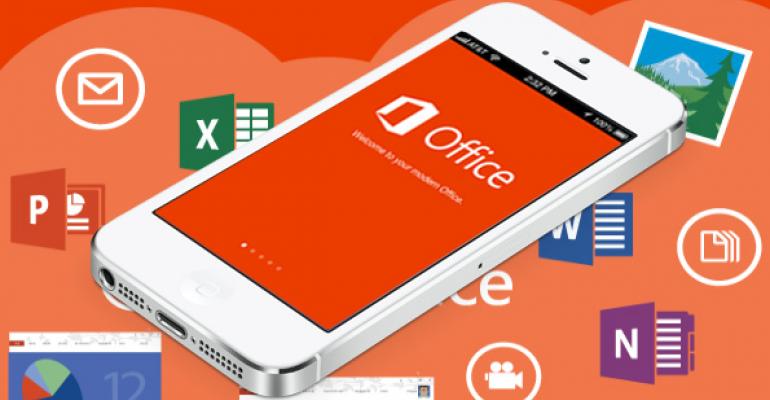 We’ve been discussing Office on iOS rumors for so long that we somehow forgot to step back and think about what such a product offering could be. But with today’s release of Office Mobile for iPhone, we know. This isn’t a full-featured Office suite for portable devices, its Office Mobile, ported directly from Windows Phone to iPhone (and iPod touch).

The good news? It’s absolutely free to Office 365 subscribers, including both home and business versions.

The bad news? There’s no iPad (or Android) version, at least not yet—Microsoft isn’t talking, sorry—and users with those devices are currently being directed to the Office Web Apps, which I’m told are being updated regularly for iPad and Android tablets.

OS integration. Office Mobile ships as part of Windows Phone 8 and is more deeply integrated with Microsoft’s mobile operating system. So, for example, when you open an Office document email attachment in the Mail app on Windows Phone, the appropriate Office Mobile app displays the document automatically. On iPhone, Microsoft or the user cannot change the default behavior, so the built-in QuickLook viewer displays the document first. Then, you can open it in Office Mobile from there. Also, your Microsoft account’s SkyDrive account will be automatically configured in the Office hub on Windows Phone (as will your SkyDrive Pro space when you connect to an Office 365 account), but you have to manually add this on Office Mobile for iPhone.

OneNote. OneNote is included as part of Office Mobile for Windows Phone 8, but you must separately find, download, and install OneNote for iPhone.

One of the big questions we previously had about Office on iOS was how Microsoft would handle licensing. But as the name Office Mobile for iPhone suggests, this is more obvious than we may have imagined. First, as noted previously, Office Mobile for iPhone requires an Office 365 subscription, so you’re already paying Microsoft. (This includes all Office 365 versions: Home Premium, Small Business, Small Business Premium, and any of the Enterprise versions.)

Third, what about Apple? One of the supposed controversies during the build-up to this release was how or if Microsoft could get around Apple’s Draconian licensing requirements, where they get a 30 percent cut, not just of the app price, but of any product or service offered in the app. Microsoft is indeed offering users the ability to sign-up for Office 365 from within the app. So does Apple get a cut? Microsoft isn’t sharing any specifics of its agreement with Apple, but they did tell me that they worked with Apple on the app and Office 365 sign-up experience.

Of course, this licensing differentiation along with the product name also tells us that Office Mobile for iPhone is not a full-fledged Office suite. And it’s not. Instead, Office Mobile for iPhone works as it does on Windows Phone 8, providing access, viewing and editing functionality for Office documents hosted on the device, in SkyDrive, in SharePoint Online/Office 365, or in SharePoint.

The experience is tailored both for the requirements of a small screen device, and the expectations that users would have on such a device. As with the Windows Phone version, you get full file fidelity and formatting on “roundtripping”—when you create a document on the PC, edit it on the go, and then access it again later on the PC—along with that “anywhere access” promise. Indeed, as with Windows Phone, Office Mobile for iPhone offers a really nice experience that is optimized for the iPhone’s small screen.

Office Mobile for iPhone lets you connect to three types of online document services: SkyDrive, SharePoint Online (part of the business versions of Office 365), and on-premise SharePoint. When you first sign in to the app, the appropriate online document store(s) (SkyDrive for Office 365 Home Premium, or SkyDrive Pro and your Team Site in SharePoint Online) are automatically added, but you can add more at any time through Open, Add a Place, and mix and match as you do elsewhere.

Office Mobile for iPhone, again like the version in Windows Phone, provides access to blank new documents for Word and Excel as well as three templates for each (Agenda, Outline, and Report for Word Mobile, and Budget, Event Schedule and Mileage Tracker for Excel). To beat this to death, these are the exact same options you get in Windows Phone.

I’ll look at unique Word, Excel and PowerPoint Mobile features in a moment, but it’s worth noting that the presentations differ between Windows Phone and iPhone only slightly. It’s basically the same capabilities in different packaging.

Word Mobile is used to view and edit Word documents. By default, the app appears in a full-screen reading mode, giving as many pixels as possible to the content.

To display the toolbar and access other options, just tap the screen. Then, you can use the Edit button to enter editing mode and add and change information and basic formatting. The virtual keyboard appears so you can enter and edit text, and you can move the cursor position around and select text with your finger and well-developed touch skills.

Word Mobile offers the same basic text formatting features here as it does on Windows Phone: Bold, italic, underline, strikethrough, and sizing, and three colors each for text color and text highlighting.

You can also find text in a document or trigger an outline view to navigate quickly through a large well-structured document. Even the Comment feature from Word Mobile on Windows Phone is available, so you can add comments that will be viewable in other versions of Word, such as the PC version or the Word Web App.

Excel Mobile is used to view and edit Excel workbooks, which contain individual worksheets, or sheets.

All the expected touch-based navigation controls work as expected—you can pinch to zoom, for example—as does cell selection. Tabs at the bottom let you switch between any available sheets.

As with Word Mobile, an Edit toolbar button puts Excel Mobile into edit mode and you can format cells, undo and redo actions (which, if I’m not mistaken, is not possible with Excel Mobile for Windows Phone), create a chart, or autosum a selection of cells.

The Format tools work as on Windows Phone, with unique date, currency and percentage formatting in addition to more typical text formatting. But there’s also a text/number toggle which is unique to this version.

Excel Mobile for iPhone supports the same amazing range of functions you see in Windows Phone, built-in formulas that let you easily perform special calculations on selected values. And you can also use the more automated AutoSum to automatically runs certain sum and sum-like calculations against a range of values. This includes the sum of the values, as well as the average of the values, the maximum value (max), the minimum value (min), and the count (the number of selected cells that contains a number).

The chart-making tools work as they do on Windows Phone: It supports the same six chart types—column, line, pie, bar, area, and scatter—and places the chart on a new sheet.

PowerPoint Mobile lets you view all the slides in grid, reposition slides if necessary, edit text (only) in any slide, and add or edit slide notes.

You can also hide a slide. That’s about it: As noted previously, it’s pretty basic.

Office Mobile for iPhone is available from the Apple App Store in the United States today and will ship internationally next week. The app is free but requires an Office 365 subscription. You should also seriously consider grabbing the OneNote Mobile app for iPhone as well.

It’s impossible to look at something like Office Mobile for iPhone and not wonder about expected future Office Mobile versions for iPad, and Android handsets and tablets. But unless you’re quite experienced with Office Mobile on Windows Phone—unlikely—then Office Mobile for iPhone may be somewhat confusing. First, it’s for the iPhone, not the iPad. And second, it’s nothing like a full-featured Office productivity suite. But as a mobile companion solution, it works quite well. And it’s basically identical to the Windows Phone version, which isn’t too shabby. If you use Office and, gasp, an iPhone, this one’s a no-brainer.