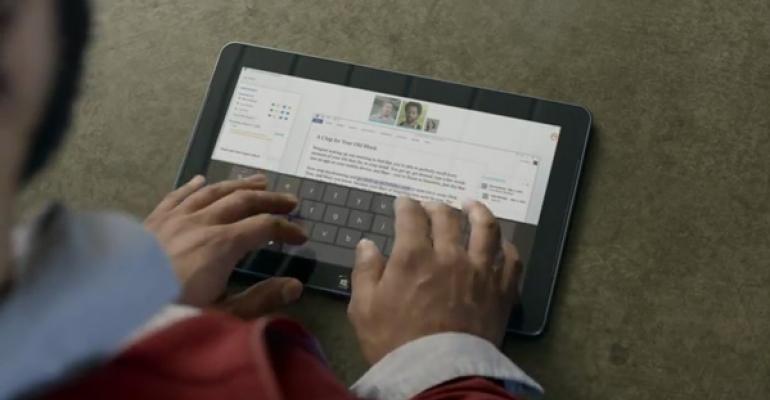 This second look at configuring Office 365 for businesses on mobile devices focuses on the new mobile environment, previously called “Metro,” that’s available in Windows 8 and RT. But don’t worry, traditional PC users: I have a few tips for those using more traditional PCs and the desktop environment too.

Metro vs. desktop: What we’re talking about here

While yesterday’s discussion about configuring Office 365 on Windows Phone 8 was pretty straightforward, Microsoft is in the middle of remaking Windows into a platform that will be as at home on ultra-mobile and highly-connected devices like tablets as it is on traditional PCs. As such Windows 8, and its ARM-based variant Windows RT, comes with both a new mobile platform, formerly called Metro, as well as the traditional desktop environment.

As you might expect, Office 365 can be surfaced in both environments. And while this series is aimed at mobile usage, I’ll provide a quick overview of the desktop-based configurations you should consider here in addition to looking at the Metro side of the fence. That said, most of this article is about configuring Office 365 in the Metro environment.

The first step is to add your Office 365 to the suite of communications mobile apps—Mail, Calendar, People, and Messaging—that Microsoft ships as part of Windows 8 and RT. You can do this from Mail, Calendar, or People only, as the Messaging app works only with the Messenger and Facebook networks and has no Office 365 interoperability at all.

From Mail, Calendar, or People, open the Settings charm (Charms, Settings, or WINKEY + I) and tap Accounts. Then, tap Add an account. At Add an account, choose Outlook.

In the full-screen notification that appears, enter your Office 365 email address and password. If you are prompted to “Make [your] PC more secure,” you will need to tap the Enforce button. And that’s it: Your Office 365 account is now available via Mail, Calendar and People.

Once you’ve added the account, however, you should take a look at how it’s configured, and in this case the settings will differ a bit from app to app. (That said, you access these settings the same way; Settings, Accounts, and then your Office 365 account.)

From any of the apps, you can change the account name and determine whether to sync email (Mail), contacts (People), and calendar (Calendar). Note that the Calendar app does not work with Office 365/Exchange-based tasks.

Two of the apps also have a few app-specific settings you might want to examine. In Mail, for example, two weeks of email are downloaded by default, and there is an email signature pre-configured. And in Calendar, you can choose which Office 365 calendars are displayed, and what color they use.

Get the mobile apps

If you’re using Windows RT, or Windows 8 on a tablet, you will definitely want to grab the two currently available “Metro” Office apps, Lync and OneNote. Soon, more will be available, including a SharePoint Newsfeed app.

Let’s look at Windows RT first. As you may know, Windows RT is not compatible with any Windows desktop applications that don’t ship with the base OS. For Office 365, this means a few things. You can’t download and install SkyDrive Pro, for example, so you won’t be able to automatically sync a SharePoint-based document library with your device.

Windows RT does come with Office 2013, so you can make your SkyDrive Pro storage the default open/save location in Word, Excel, and PowerPoint. To do so, open one of those applications and then tap the File menu button. In the Open view that appears, tap “Add a place” and then Office 365 SharePoint. Sign into your Office 365 account as prompted, and Office 365 will be added to the list of places that Office uses for documents. In fact, it will be the default. (SharePoint always takes precedence over SkyDrive in Office 2013.)

If you’re using a OneNote notebook in SharePoint Online in Office 365, navigate to that notebook in the web interface using Internet Explorer, open it in OneNote Web App, and then choose Open in OneNote to get it into OneNote 2013 on your PC. From now on, you can access it seamlessly from the application directly.

Windows 8 works similarly to Windows RT, but you get some additional niceties. First, if your Office 365 subscription supports it, you can install Office 2013 over the web, and this version of Office includes SkyDrive Pro—see Office 365 Tip: Set Up SkyDrive Pro on Your PC for more information about getting that going—and several other applications. And it automatically configures the Office applications to use your SkyDrive Pro-based document library by default.

If you already have Office 2013 installed, or have separately acquired it, use the instructions above for adding SharePoint Online in Office 365 to your Office applications. And don’t forget about Outlook 2013, which is a more powerful solution for managing email, contacts, calendar, and, yes, tasks than are the Metro-style mobile apps.

If you are using an older version of Office—Office 2007 and 2010 are supported—you can use a special utility downloaded from the Office 365 web site to automatically configure those applications to work with your account. This can be found in Settings (gear icon), Office 365 Settings, Software, Desktop Setup. (You can also optionally download Lync 2013 and SharePoint Designer 2013 from this web site if needed.)