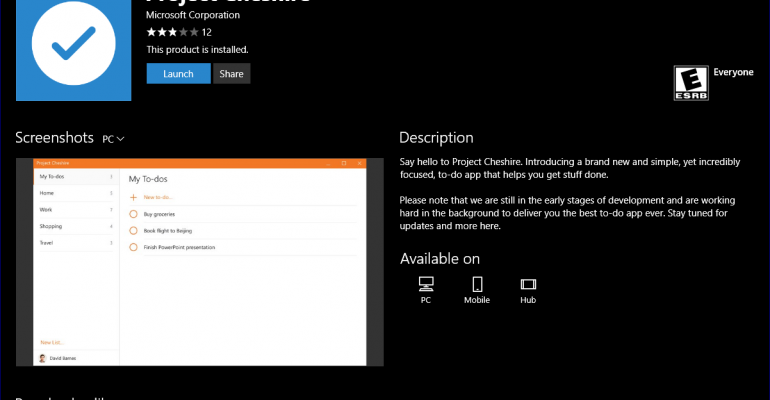 According to Microsoft this app was built by the same folks who work on Wunderlist and while the new app will eventually pick up many of the popular features from Wunderlist, at some point down the road Wunderlist will be retired.

"Today’s To-Do Preview would not have been possible without the support and input of Wunderlist fans over the last six years. In the coming months, we’ll bring more of the favorite elements of Wunderlist into the To-Do experience, adding features such as list sharing, apps for Mac, iPad and Android tablet, as well as additional integrations with other Microsoft services. Once we are confident that we have incorporated the best of Wunderlist into To-Do, we will retire Wunderlist. While the name and icon may change, the team that brought you Wunderlist continues on. We look forward to making To-Do even more useful, intuitive and personal."

One major difference between Wunderlist and Microsoft To-Do is that the new service will only be available to Office 365 subscribers and not as a stand alone to-do app/service.

Update: According to Mary Jo Foley and Microsoft any Microsoft Account can use this service and an Office 365 subscription is not required.

So that means if you are subscribed to Office 365 those will be the only accounts that work on To-Do beginning with this preview. This is very similar to how Microsoft approached their new Microsoft Teams collaboration service - by making it a value added feature for subscribers.

Something else that will surprise a lot of folks is that Microsoft is making the To-Do preview available across all mobile platforms at the same time. Iin addition to Windows 10 and the web, that means not only are there new apps for iOS and Android but also for Windows 10 Mobile. The Windows 10 version looks like it is a Universal Windows Platform app.

After the uproar of the last couple of days when the updated Authenticator app did not go out to Windows 10 Mobile this should please those users.

-- Syncing is working already between items I added to the app and Outlook 2016. Changes made in either spot also sync pretty quickly.

-- Initially it seemed as if I could not make a to-do list item a recurring event. I could however create an item in Outlook with a recurring element and that synched back to the app without issue. I could also edit an item created in the app over on Outlook and make it a recurring task. Then after poking around a little more in the app I left clicked in a task and it opened a sidebar that gave the option to make an item recurring. One caveat - the to-do list item must have a due date to show the recurring option in this sidebar. Not very discoverable as I expected to see those options on a right click Context Menu and it was hit and miss to directly click inside of the to-do item. If these options popped open in the sidebar when creating an item it would be great since it would be right there in front of you as you created the list entry.

This is an early preview so hopefully things will begin moving forward quickly to make features more discoverable and capable.